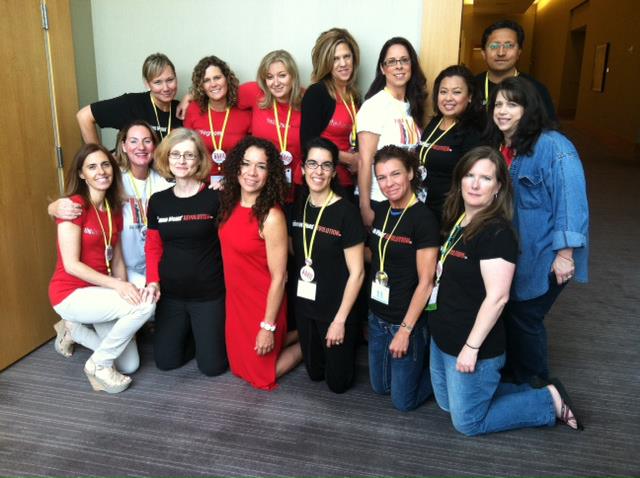 The amazing folks who started Thinking Moms’ Revolution pose for a photo at AutismOne. They have children with autism and other health challenges. Melanie Baldwin (standing on the right) is also fighting a recurrence of cancer.

I hate cancer. And I hate autism. I’m very lucky: Despite the exponential rise in autism in America, none of my four children has autism, brain damage, encephalitis, or encephalopathy. But when I got pregnant for the fourth time (yes, it was planned. No, it wasn’t an accident), I couldn’t stop the desperate worry. I had three healthy children. How could I possibly be lucky enough to have a fourth? But I was: our youngest was born healthy, at home, on a Wednesday in November.

No mom should have to be dealing with that. Something is going desperately wrong in America.

I was invited to speak at the AutismOne conference in May 0f 2013. That conference was amazing. Terrifying. Inspiring.

At AutismOne I met some members of a group called the Thinking Moms’ Revolution.

They have children with autism. They started out as 24 friends. Twenty three moms and one dad. They did what their doctors told them. They followed the current American pediatric protocol exactly as the mainstream would have them follow it. With disastrous results. These 24 brave souls, unlike me, do not have healthy children. 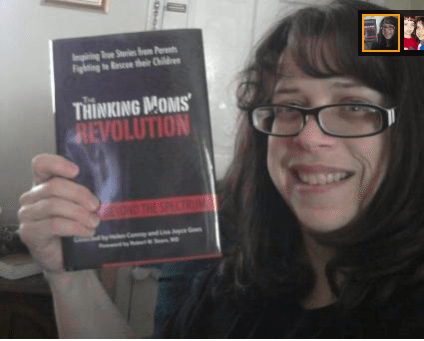 Melanie Baldwin, pictured here with her book, died of cancer. I hate cancer.

They came together to write a book, The Thinking Moms’ Revolution, about their efforts to heal their damaged children, most of whom were suffering from neurological disorders and the effects of autism.

I bought three copies of their book.

The TMRs also started a blog focused on all kinds of children’s health issues.

They are people who make things happen.

They are people who learned the hard way that the system is broken.

Now the TMRs have got their fingers in all kinds of pies related to children’s health and autism. One of the women I met at AutismOne was Melanie Baldwin, a.k.a. Booty Kicker.

Melanie’s son, Luke, is severely affected by autism, and Melanie, whose religious faith means a great deal to her, has written eloquently on the subject of churches and special-needs ministries. Her writings have touched a lot of people and helped many to understand the spiritual needs of families dealing with autism.

But Melanie isn’t just dealing with autism. She had breast cancer a while back and seemed to be doing fine, till a resurgence of cancer was found in her hip last year.

I’m so mad I can’t even write this.

Melanie had surgery last year. And now Melanie’s cancer has come back a third time.

She’s very sick now, and she’s in the hospital away from her husband, Tim, and their son. Their finances have already been ravaged by cancer and autism treatments.

The Thinking Moms’ Revolution set up a site to raise money to help their spiritual sister Melanie and her family defray the costs they are facing. Since I’m a luddite and I didn’t want to pay GiveForward’s fees, I sent Melanie a check for $100.

It wasn’t enough enough. No amount of money is enough. But it’s something.

Updated to add: 3 days after I wrote this post, on October 5, 2014, Melanie Baldwin died of cancer:

Melanie Hamilton Baldwin, 43, passed away on October 5, 2014. She is survived by her husband Timothy Baldwin and their son Luke, three brothers, David Hamilton, Tim (Sherry) Hamilton, Mark (Esther), Hamilton. She was preceded in death by her parents Charles and Patricia Hamilton. Mrs. Baldwin was a member of Kirby Woods Baptist Church and attended Longview Heights Baptist Church. The funeral service will be held at 10 a.m., Wednesday, October 8, at Memorial Park Funeral Home with the visitation one hour prior to the service. Interment will be in Memorial Park Funeral Home. Memorials donations may be made to The Thinking Moms’ Revolution.

We need to stop the autism epidemic, get the cancer-causing toxins out of our food and water supplies, and help each other.

Please do something. We can’t help everyone but we can help! Please send a donation to someone like my friend Sean, who is struggling with cancer.  Please tell everyone you know that autism is your problem too, whether your kid is on the autism spectrum or not.

Tell your legislators, journalists, and friends that the current state of America’s health is unacceptable.

That we can no longer allow businesses and for-profit medicine to dictate the health of our children.

My four year old—that same one who was born so healthy nearly five years ago—just woke up. Her small blond head is leaning against my left shoulder.

And now I’m sobbing. “I’m not wasting time on the internet,” I cry to my oldest daughter. “I’m not trying to ignore Leone. I just have to get this finished. My friend has cancer and her family needs help.”

« Am I The Only One Who Had a Shitty Summer?
Where You’ll Find Me: Reston, Virginia »