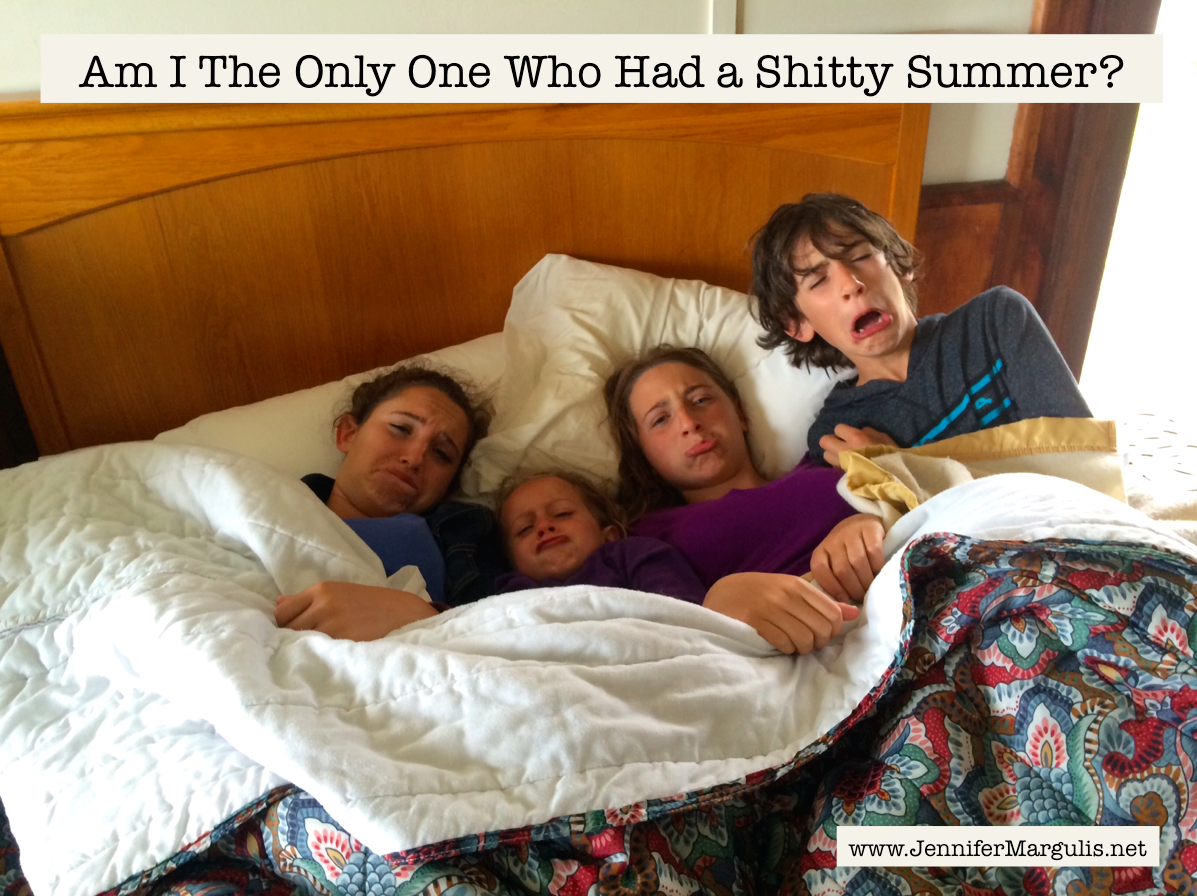 “How are you?” My friend Michele asks as we bring our iced lattes to a wrought iron table outside the coffee shop.

“Okay, I guess,” I say flatly. Michele looks at me curiously, expecting me to say more. “The truth is I’ve been having a really shitty summer …”

“Really!” Michele sounds astonished. “I never would have thought that.”

“Don’t believe anything you read on Facebook,” I sigh. 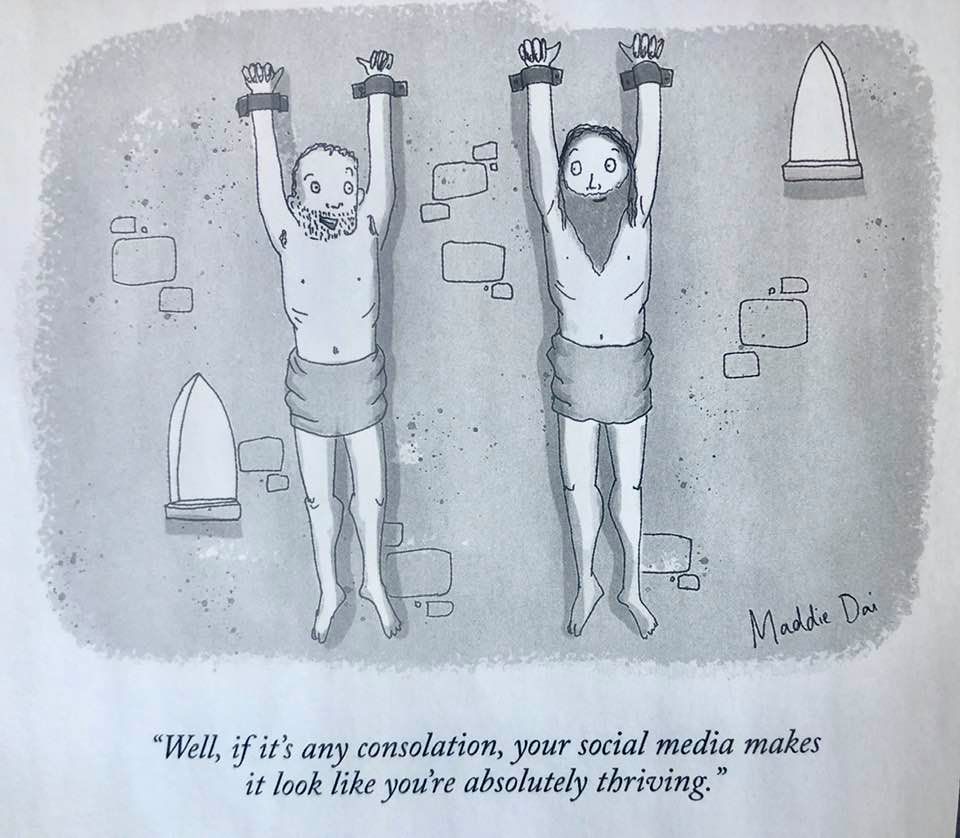 Cartoon spotted in the New Yorker. Don’t believe anything you read on Facebook or any other social media. Your friend posting those gorgeous photos of their vacation may be having a shitty summer in real life…

My son started fifth grade today and my older girls go back to school tomorrow. After weeks of unbearable heat, there’s a nip in the air. The leaves are starting to turn yellow and red and orange.

Though I don’t do well with the lack of light in the winter months, I’m so glad the days are getting shorter and we’re heading into a new season.

The weather in July and most of August was unbearably hot, topping out at over 105 degrees some days. We’re in an extreme drought in Southern Oregon and northern California and we’re surrounded by wildfires, though there’s less smoke in our valley than there was last year. Everyone we knew traveled somewhere fabulous to get away from the heat. Every time I checked Facebook there were more gorgeous photos of small children eating ice cream cones in front of Hawaiian sunsets and groups of friends kayaking sparkling rivers while mergansers bobbed in the water beside them.

It was painful, looking at those pictures of my friends with their smiling families on their fantastic vacations while I stayed in my office with sweat sticking to my shirt frantically meeting deadlines.

And my kids have been hating on each other all summer. Once friends and playmates, my 4-year-old and 10-year-old managed to get into shrieking matches several times a day.

It doesn’t help that there are no boys my son’s age in our neighborhood.

And even if there were, I’m not sure it would have made a difference.

We live in an unfortunate time in America when children no longer walk to their friends’ houses to play.

Isolation and lack of community make for a shitty summer

A few years ago my daughter and I dropped by her best friend’s house. Their family lives just three blocks away. Her friend had another friend over. They all ran around together having fun but afterwards Greta’s mother made it clear that she was upset with me for not calling first and that it was so awkward that we had come over. After that Greta was unavailable for “play dates,” no matter how many weeks in advance we tried to schedule them. When I invited their whole family over for Hanukah, which we did every year, her mother said they were going “to pass” with no explanation.

My mother died very suddenly almost three years ago. I’ve been fighting what sometimes feels like a biochemical depression ever since—the air goes out of my lungs, as if someone punched me in the stomach. Other times my limbs are so heavy it’s like I’m mechanical, a robot jerkily lifting foot and placing it in front of the other, going through the motions of working, making dinner, cleaning up the house.

My mother’s death hit me especially hard this summer. Her boyfriend had promised to visit but canceled via email, nonchalantly, because he was too busy with work. Which was as familiar as a skinned knee, something my mother would do.

I picked up the phone to call her to tell her how disappointed we were about Ricardo. Then froze, my face numb. I could not remember the number. I had forgotten she was dead.

Before she died, my mother had grand plans for my daughter to go to an outdoor adventure camp with my brother’s daughter. Just hours before she collapsed from a catastrophic brain hemorrhage, she had bought a ticket to come spend a week with us.

If she were alive, my mother would have visited this summer.

If she were alive, I could have called her on the phone and told her we were having a hard time, money was tight, and the kids were fighting. She would have offered to send me a check and scolded me into good humor.

“Don’t be silly, Jenny,” my mother liked to say. “Your kids are great. Stop complaining and let’s talk about mitochondria.”

Maybe this shitty summer will lead to a spectacular Fall?

My son got himself up this morning. He wet his hair and brushed out the tangles without being asked. He made himself a tomato and cheese sandwich, whining about the tomatoes being too mushy. He took a container of sliced cucumbers and a bottle of pomegranate juice out of the fridge, putting it all in a canvas lunch bag. I made him an egg in the basket for breakfast. He grabbed his new school supplies from where he had stashed them on the top bunk.

“Excited about the first day of school?”

Me, I hate summer. This shitty summer anyway. Next year maybe we’ll be able to figure out a way to be that family that goes somewhere fabulous.

In the meantime, I’m just so glad it’s finally Fall.