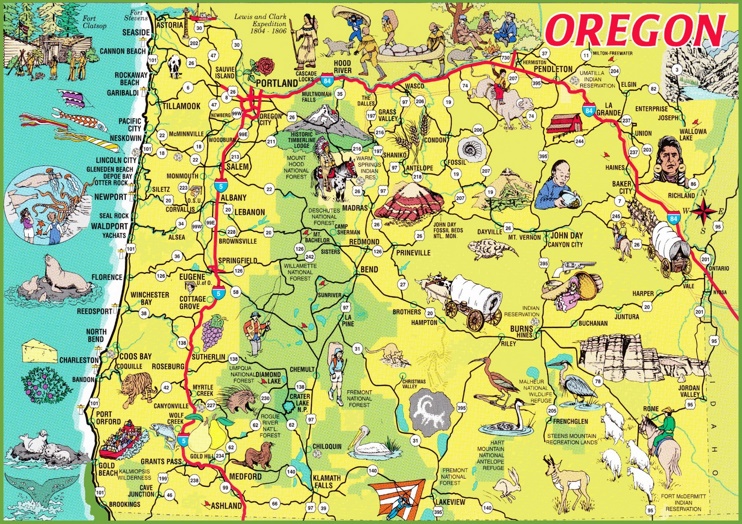 A few weeks back, my daughter Athena and I went to Eugene, Oregon to check out the Whiteaker neighborhood, an artsy eco-friendly part of the city, for an article I’m researching. We also enjoyed the River Path, Skinner Butte Park, Salt Creek Falls (the second largest water fall in Oregon), and a rafting trip.

On Thursday in Eugene, Oregon we went to the Nikasi Brewery, where I sampled a bitter pale ale, and then we walked around the Whiteaker neighborhood where there are luscious vegetable gardens growing out of the sidewalks, and where foodies mingle with guys with long gray beers and dogs carrying packs. We also went to the Rose Gardens there.

Athena drew a flower. A man, clearly stoned and jittery, leaned his leg against a bench and kept crossing himself.

On Friday we went on the Oregon Skyway gondola at Willamette Pass Resort, after a stop and a quick hike down to Salt Creek.

We were with a busload of tourists, journalists, and community members.

Unfortunately, the bathroom on the bus had a glitch and the entire bus smelled of human feces.

It was something of a disaster. Luckily, they fixed it when we stopped for lunch.

Saturday morning we went to the RiverPlay Playground at Skinner Butte Park and grabbed some lunch at the 5th Street Market.

Then we headed to Creswell for a McKenzie River rafting trip led by a family-owned rafting operation.

To live in Eugene, Oregon, I’ve decided, there are rules:

Eugene, Oregon Rule #1: You must sport a nose ring, eyebrow ring, or other prominent piercing.

Eugene, Oregon Rule #2: You must also have at least one visible tattoo.

It’s a crowded city, by Ashland standards, but there are loads of fun things to do there, especially with kids, and lots of people commuting by bicycle.

We had a jam-packed visit. But we didn’t make it to the Science Factory, the Saturday Market, or the Cascades Raptor Center.