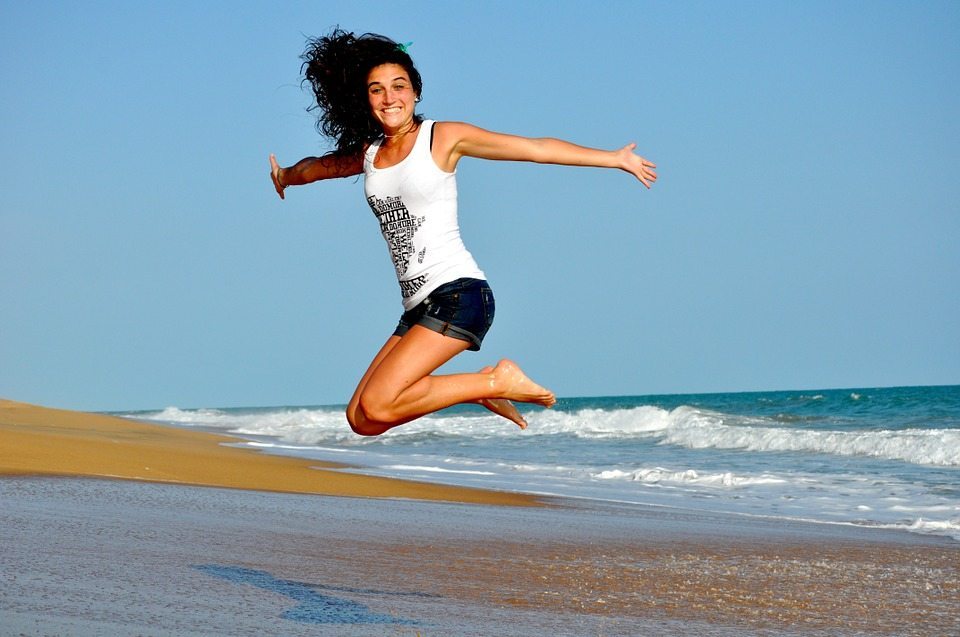 From the moment I found out I was pregnant, I knew that my child would not be born in a hospital. At the time I lived in a community where there were many outdoor types. Moab, Utah is full of what mainstream society would consider as odd beings: people who live in teepees, caves, tents and vans, disassociated from the regular hustle and bustle of society.

I thought it would be a perfect place to be supported to have a primitive birth. But as my pregnancy progressed I found very little support for an unassisted outdoor birth. It got back to me from a friend who worked at the local women’s shelter that someone had recommended calling Child Protective Services on us. I was being threatened with losing my child before she was even born, just because I mentioned that I envisioned an unassisted outdoor birth.

I wanted an unassisted outdoor birth

I kept my faith in the idea of wanting my daughter to be born the way my ancestors had birthed their children before doctors started attending birth.

I was surprised and saddened that 98 percent of those who surrounded me, even those whom I thought to be my friends, turned away—dismissing me and labeling me as an unfit mother for my vision. But the other two percent is all we needed to believe that we could do this.

The pregnancy was a rollercoaster of feelings. We were trying to have the healthiest pregnancy we could primarily based on faith and intuition. I did give in and see a doctor twice before the birth. The doctor himself was born at home but he still advised against it! He was very hostile to me during the second visit because I was eight months pregnant and had only seen him one other time in the early months of my pregnancy.

He was especially upset that I had refused an ultrasound.

I had done my research, and had a long list of questions about the standard procedures that a mother and child undergo during and after the birth. Instead of answering my questions with information, he became frustrated. I asked why they recommended antibiotic ointment for the eyes and a vitamin K shot after birth. I wanted to know what was in the jelly that they use for the ultrasound?

“Can I walk outside while I am laboring?” I asked. “I read that walking is important to help with the birthing process.”

His reply is what did it for me: “Only if there is enough staff, but most likely not.”

That answer was confirmation that I was supposed to birth my baby outside.

A horrific visit to the doctor

That doctor’s visit was horrific for both my partner and me. The doctor also told us that Mary was underdeveloped, and in the bottom third percentile in size. He pushed us to get an ultrasound, which we had avoided up till this point, due to how invasive they are. In hindsight, I would have not done the ultrasound. They must have been updating their equipment because the tiny room was filled with staff members invasively using my child’s ultrasound as a test trial. I was speechless and felt violated.

But my partner and I just became more confirmed in what it was we felt was right. Justin had been doing research, and reading on how to be a midwife and I trusted him.

Even though I had decided to have an unassisted outdoor birth, I felt some fear. No one I talked to knew anything about primitive-style birth and the concerns affected me. What if something did go wrong, like everyone was warning me about? What if my baby died? Would she be in the right position? Would I be ready to birth her? Was the doctor right about her being too small?

I was persistent in finding a shaman to help clear the space spiritually so that Mary would be led and protected by Great Spirit. My prayers were answered and a local woman we call Mush agreed to lead the ceremony for birth.

One Saturday Justin and I, gleefully biking about town, met Mush for the ceremony, even though the doctor had pushed our due date back another month.

But Spirit knew, because early the next morning my water broke.

I woke up before the sun and knew that day was the day she would be born. I went for a walk to clear my mind; I prayed to Great Spirit and was told that she would be coming around 10 p.m. that night, which she did.

A force of power came over my body, my mind was quiet and focused. We went about our Sunday as usual, attending church. A few of the older women seemed to know that I was laboring.

Then we walked about town, went to our usual coffee shop to listen to our favorite Sunday radio show on the local radio station, and smoked some high-end organic hash to help ease the increasing contractions.

We stopped at the Co-op. I was flipping through the book Spiritual Midwifery when a friend approached.

“You’re in labor!” she cried in a panic. “You’re going to the hospital right?”

“I don’t think so,” I said smiling. Then looking at my partner I said, “I know where to go.” 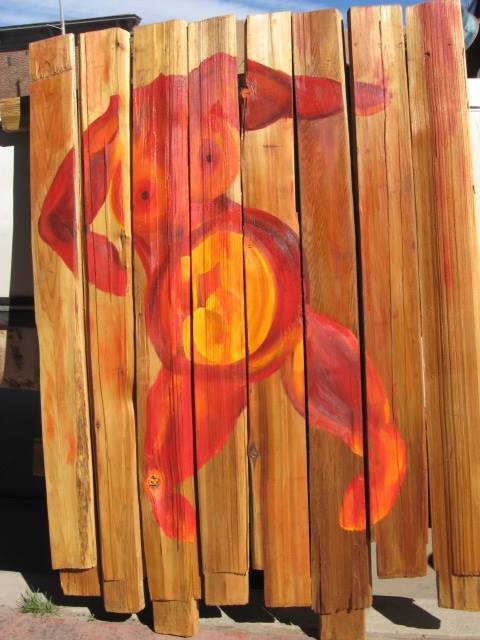 The painting I began to help with contractions during my unassisted outdoor birth.

We had looked at a couple caves in the surrounding red rock, but I decided to go to Whale Rock, above the sacred Birthing Rock. On the top of a cliff, overlooking the vast red rock formations, just out of cell phone service, across from a large whale-shaped red rock.

During my pregnancy I had had a dream about a whale that pulled me into the ocean, then stared at me with the great blue eyes I now recognize as my daughter’s.

I believe this was a premonition to where my daughter would be born though I had the dream when I was only about six months pregnant.

We drove to Whale Rock. Justin had built me a large cedar plank canvas. He placed it upon a rock resting perfectly against the No Camping sign.

The contractions now very intense, the hash no longer something of interest, I turned to painting, listening to the sound of Justin’s graceful blues banjo and the ravens dancing in the sky.

Anytime I broke focus from the painting, a contraction would come on like a tidal wave. As the sun began to set, a painting of a red dancing pregnant lady reflected the red rock tones.

It was time to set up our spot.

We laid a few blankets down on the red sand atop a cliff band, surrounding it with candles, Justin diligently caring for me as I began to be overtaken by the powerful contractions.

It was dark now; only the glow of the fire and candles warmed us on that February evening.

I began to tire and weaken physically, the contractions a force to reckon with.

I remember looking to the sky and asking Great Spirit if Mary was okay. A gentle breeze dawned upon us, flickering the dancing flame—this was all the confirmation I needed.

Exhausted, I was sitting leaned up against a large backpack.

“You have to sit up my love, she can’t get out in that position,” Justin said.

He had prepared a black cohosh and pennyroyal tea.

Within a few sips Mary began to push her way out further.

Sliding into her father’s gentle hands

“She’s coming!” I screamed, my words echoing off the canyon walls.

I was on my knees with my hands above my head, as you might see someone who is praying to the sky. This is the position I was in when she was born. Mary made her way into the world, sliding into her father’s gentle hands.

Waiting for the placenta, he handed the baby to me through my legs.

Remembering what I had learned in prior years of being an emergency medical technician, I visually scanned her, then collapsed onto the backpack, cradling her against my chest for the first breastfeeding.

I was losing a lot of blood, and beginning to feel as though I might lose consciousness. Justin prepared a potent batch of comfrey tea, which he practically force-fed me, since I was so exhausted. He also pasted comfrey around my vagina.

Luckily I hadn’t torn at all, but the comfrey tea stopped the bleeding, and possibly saved my life. 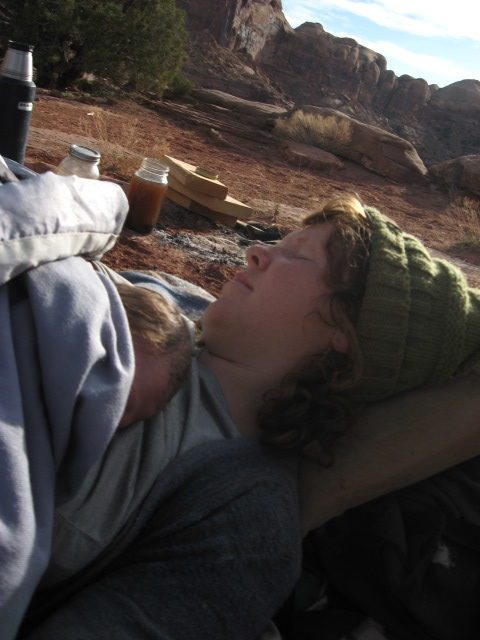 The morning after my unassisted outdoor birth. You can see the rawness, the herb books, the comfrey tea we used in the background

Mary was healthy and interacting. Her eyes were open, her breathing was consistent, she did not cry. More than anything there was just an overwhelming sense of peace. Justin says it is like we woke her up from a deep sleep. She latched on and we had a brief breastfeeding session, then we fell asleep. I woke up later that evening with Mary lying on my chest. She had opened her eyes and was gazing at the moon, the moonlighted reflected in her eyes. I dozed off, waking to the rising moon.

We awoke to the warming sun coming over the high red rock cliffs, Mary now lying on her father’s chest. We lay in silence, in awe of all that had happened. 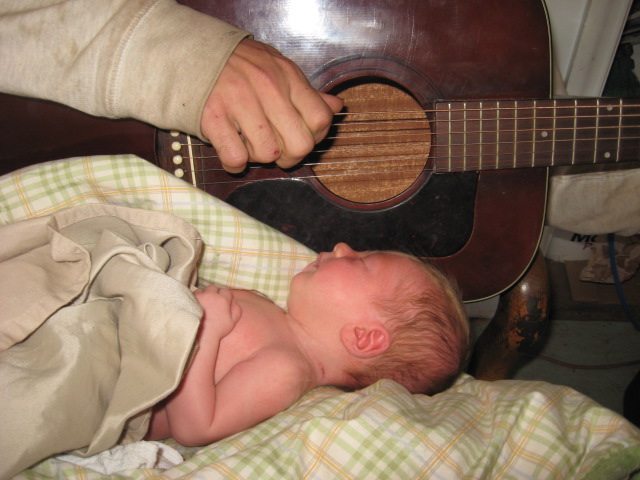 My partner Justin playing music for the baby, who was born during an unassisted outdoor birth.

Now six months have nearly passed, and Mary Moonflower is a very healthy and strong young lady; she’s currently trying to help me type this story.

She is above average for her age in size, standing on her own, forming words. Her favorite word is mom. 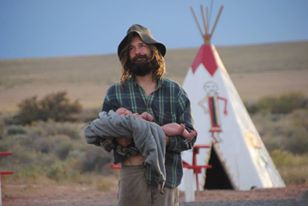 Justin holding our baby girl. I love this image, it is very symbolic of our family. She came into the world via an unassisted outdoor birth, which is the perfect way to begin life.

She’s wanting to walk before she crawls and loves playing instruments with her dad.

Until now I kept the details of our unassisted outdoor birth to myself. Many people have ridiculed us, including my family, for choosing to do what they said wasn’t possible.

But I think it is important to share this story. I am so grateful for the people who helped me along the way. One woman whom supported us told me she had birthed all her children by herself at home. I am grateful for the website unassisted childbirth, and the Facebook page, and all the other women I found on the Internet who bravely birthed their children unassisted.

Their stories gave me strength to birth Mary Moon the way I did, so it is my gift to share this story with others.

God bless you all.

Thank you for being such incredible beings of grace and strength.