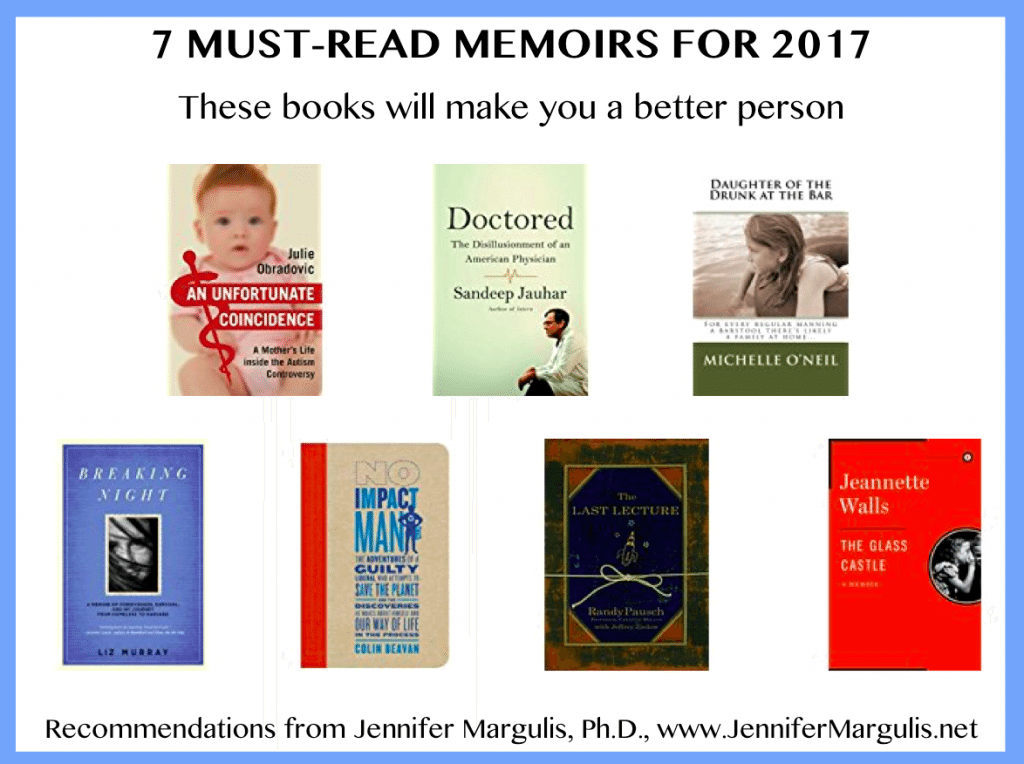 I love reading memoirs. Here are 7 must-read memoirs you don’t want to miss. These books are all utterly compelling and they will make you a better person.

An Unfortunate Coincidence is the first on my list of 7 must-read memoirs. It is a heart-stopping, exquisitely well-written story of one family’s battle with autism. This book is personal, not political, and it reads like a novel—full of hope and despair. It shows how the perfect storm of toxins, including mercury-containing vaccines, acetaminophen, and round after round of antibiotics, can destroy a child’s brain. As I wrote in my endorsement of the book that’s on the back cover, it should be required reading for every doctor and parent in America. Even if you think you know everything there is to know about autism, this book will teach you something new.

A provocative memoir by a cardiologist who is also a regular contributor to the New York Times, this book, which is the second on my list of 7 must-read memoirs, exposes some of the flaws in today’s medical system with breathtaking honesty and self reflection. Jauhar details how he struggles—and fails—to support his family’s expensive lifestyle, how he feels deeply criticized by his father and his wealthier, more outgoing, and much less ethical older brother, and how his depression and self-doubt leads him also to feel alienated from his wife. Doctored is a wake-up call to how much money influences what tests are ordered, what hospitals do, and how medical professionals counsel their patients. It’s also a wake-up call to how poorly organized our medical system is, and how even good people get corrupted by a bad system, often doing untold harm, even as they are celebrated as heroes.

For every regular manning a barstool, there’s likely a family waiting at home. That’s the subtitle of this third book on my list of 7 must-read memoirs. Janie’s father is a peeping Tom alcoholic, her mother a hard-working but totally disengaged nurse. Janie tells her story in vivid prose that brings you back to the 1980s and right into the center of her loneliness and despair. Teachers working with at risk kids can especially benefit from reading this story, as it gives you such an honest look at what the children of alcoholics go through when they are not at school. I bought five copies of Daughter of the Drunk at the Bar to give to friends and family.

The daughter of loving but totally drug-addicted parents, Liz Murray spends her childhood in the Bronx trying to please her parents and survive her cockroach-infested life. Hungry, filthy, neglected, and exposed to more partying and drug use than most adults see in a lifetime, Liz leaves “home” when she’s a teenager, staying at friends’ houses and sleeping in stairwells and under bridges. A persevering young girl who is painfully desperate for her parents’ love, she tells her story in a straightforward, kind, compassionate, and totally compelling way. Against-all-odds, by dint of sheer determination, and with the help of teachers who notice how smart she really is, Liz manages, finally, to get a high school diploma, and be accepted at Harvard. I can’t even read the Amazon reviews of this book without crying. If you’re interested in poverty and homelessness, put this as number 1 on your list of 7 must-read memoirs.

His wife not entirely on board, Colin Beavan spends a year trying to live as ecologically as he can, which means carrying his 18-month-old daughter up nine flights of stairs, only eating food grown within trucking distance of New York City (no more iced quad espressos, for him anyway), and eventually even turning off the electricity. The chronicle of Beavan’s year-long experiment, No Impact Man is full of self-deprecating jokes and laugh out loud funny. Honest and totally charming, it will inspire you to tread more gently on the earth. I loved this book. Definitely a must-read memoir.

The parting thoughts of a 46-year-old computer science professor at Carnegie Mellon who is dying of pancreatic cancer and leaving his three small children (the oldest of whom has just turned six) fatherless in a matter of months. The Last Lecture will make you thankful. It will make you laugh. And, it will also make you bawl your eyes out. Randy Pausch encourages readers to think about what matters most in their lives, to make sure we achieve our childhood dreams, and to be ourselves. The fact that he is dying leads him to cherish everything, and to urge us all to live every day to its fullest, however imperfectly we go about our lives.

A three-year-old girl stands on a chair at the stove making a hotdog. Her pink dress catches on fire and she spends six weeks in the hospital with burns all over her body. The hospital staff is kind to her; she feels safe and protected. She doesn’t understand why the nurses look at her with so much compassion but she is glad to have delicious meals three times a day. Her mentally unstable alcoholic father gets furious with the uppity doctors and takes his daughter out of the hospital without medical permission. Just a typical incident in the life of Jeannette Walls. The glass castle is the house her father promises to build Jeannette and her siblings some day. Her mother, also mentally unstable, is a self-proclaimed adrenaline junkie and both parents are often thrilled by their lifestyle, even as their children are sexually, emotionally, and physically abused. The Glass Castle (like the other books on this list) is a memoir you will read and then want to read again. The writing is beautiful, the story is heart-wrenching. And even though Jeannette Walls was able to get herself out of poverty and away from her toxic and chaotic past, the book reminds us that so many children in America still silently suffer from hunger, abuse, and neglect.

« How I Rocked My Unassisted Outdoor Birth: The Birth Story of Mary Moonflower
It’s OK to Cry: Why We Should Listen to Our Children’s Tears »