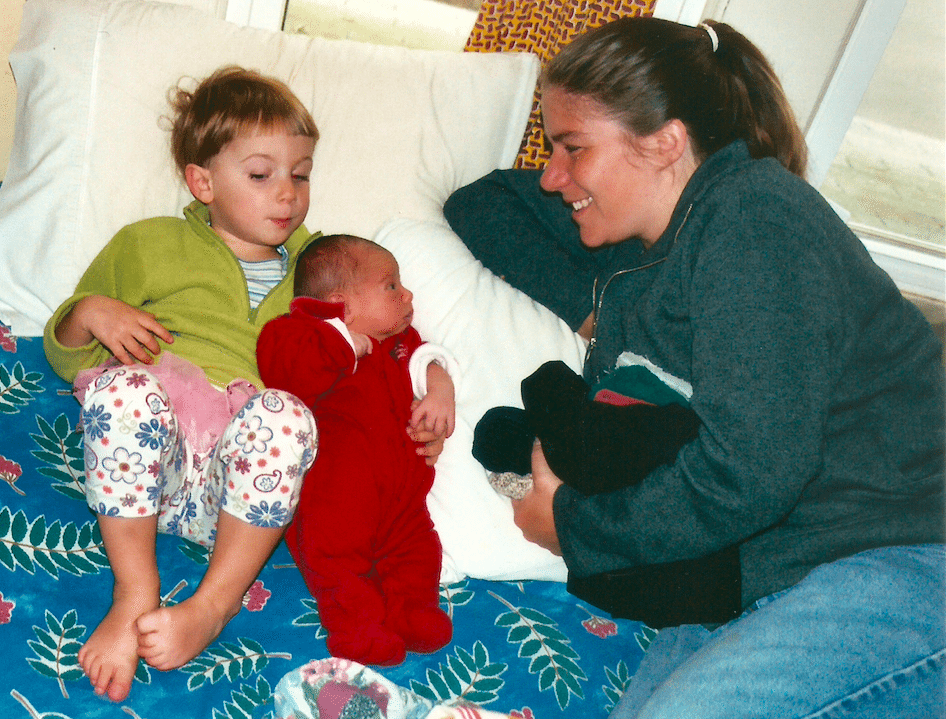 James Faulk decided not to circumcise his son. An increasing number of Dads are turning away from circumcision. A newborn baby boy with his big sister gazing lovingly at his aunt. Photo by Jennifer Margulis.

I Decided Not to Circumcise: Keep Your Little Man Intact

By James Faulk
Special to www.JenniferMargulis.net

There’s a lengthy list of examples in my life where following my wife’s advice from the beginning would have spared me much in the way of discomfort and delay, but luckily, with one very important subject, she managed to convince me right off the bat.

We were married in the late 1990s, and within weeks of exchanging our vows, we were with child. It was a happy honeymoon in a cottage on the beach, and that’s apparently all it takes.

As we progressed through the months of gestation, we belabored many of the common questions new parents face: choice of a name; identification of gender; overall health concerns; and yes, whether to sever our male child’s foreskin.

Ach. It’s not a subject most people want to discuss over Sunday scones, but bear with me.

Should the son resemble the father?

As one of the vast majority of circumcised adults in this country, I initially believed that the most important factor was that the son resemble the father, so that there’ll be no question of abnormalcy, and no awkward explanations to fret over in later years.

So initially my mind was made up.

Amy, however, began what became months’ worth of research on the relative pros and cons of both sides.

Medically, I decided, it’s a wash.

For every source that tells you circumcision prevents infection or reduces the likelihood of STDs, there’s another equally reputable source that will tell you circumcision increases the chances for a bevy of other complications (including penile adhesions and even autism) and issues later on.

Also, what matters is not so much that the son resemble the father, but that he fits in with the majority of his peer group, Amy found.

But for Amy, interestingly, her mind was finally made up when she researched the even more horrific tradition of female circumcision, something she’d previously been unaware existed.

In some cultures, not to name any names, female children are mutilated to limit or eliminate their future abilities to enjoy sex, in the name of a twisted and despotic morality that defined a woman’s sexual pleasure as some kind of abomination.

Logically, while male circumcision is somewhat less dramatic and injurious than what is done to females, Amy realized there’s no real substantive difference between the two procedures.

Hacking and slashing at someone’s junk is wrong, no matter how you cut it.

I was reluctant at first, but sensing her passion over the issue, and having no real problem with foreskins as a rule, I went along with her decision to leave our boys intact.

Interestingly, the country as a whole has followed suit.

Today only 33 percent of babies are being circumcised, compared to 56 percent five years ago and 90 percent sixty years ago, according to the U.S. Centers for Disease Control and Prevention.

And as I’ve grown older, and less prone to follow cultural norms just because it’s what you’re supposed to do, I’m glad we refrained.

I lost a healthy chunk of junk

According to a recent article in the Huffington Post, circumcision involves removing what amounts to 50 square centimeters of erogenous tissue that forms a sleeve around the penis.

Basically, that means I lost a healthy chunk of junk that could’ve given me all kinds of pleasure these last 39 years. And why? Not because of the Jews, despite what Abraham did or did not do.

According to one study, fully 10 percent of circumcised men wish they’d been left with their hoodies intact.

Unfortunately, there’s no way we’ll ever really know what was lost.

Food for thought, though: Most people assume that removing the foreskin is merely a cosmetic simplicity, involving a mostly numb piece of surface tissue.

But it’s not that simple.

Decided not to circumcise: Penile trauma

The foreskin of babies is actually fused to the head of the penis — to make circumcision possible, doctors have to forcefully separate the foreskin from the glans by inserting a probe and roughly scraping the tissue all the way around.

How does such early and awful penile trauma affect the psychology of boys growing up?

Hell if I know, but it seems like a question that should damn well be answered.

My son was born perfect

Ultimately, the argument for us boils down to this: Every single inch of our babies seemed perfect upon their emergence from the womb — their blessed and delicate fingers that squeeze your thumbs so lightly and so early; their pink cheeks and fat thighs; the sweet scent of new life that lingers on their skin, on their clothes, and in your heart.

If all these things give us such joy, such parental satisfaction, I’m convinced that we need to think long and hard about any tradition or procedure that dictates we immediately mutilate our children upon birth, in the name of some kind of moral or medical improvement.

As is usually the case, a little research goes a long way to prove that such conventional wisdom is really what should be cut loose and tossed in the red biohazard bags. 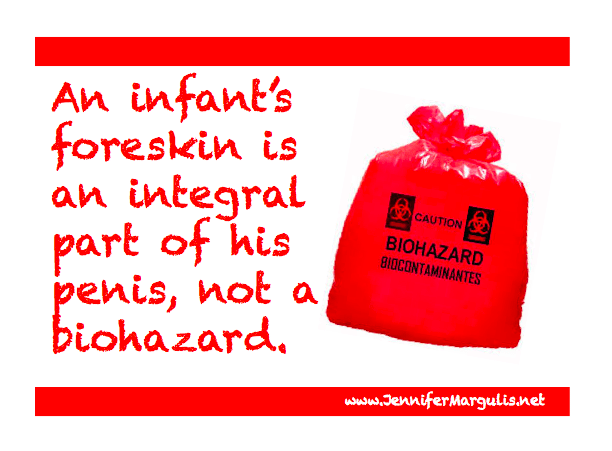 Some men think their sons should resemble the father. James Faulk talks about why he decided not to circumcise his son, arguing that it’s better for the baby to keep him intact.

A version of this article about why James Faulk and his wife decided not to circumcise their son first appeared on LostCoastOutPost.com. Reprinted with permission of the author. James Faulk is a writer living in Eureka. He can be reached at faulk.james [at] yahoo.com.