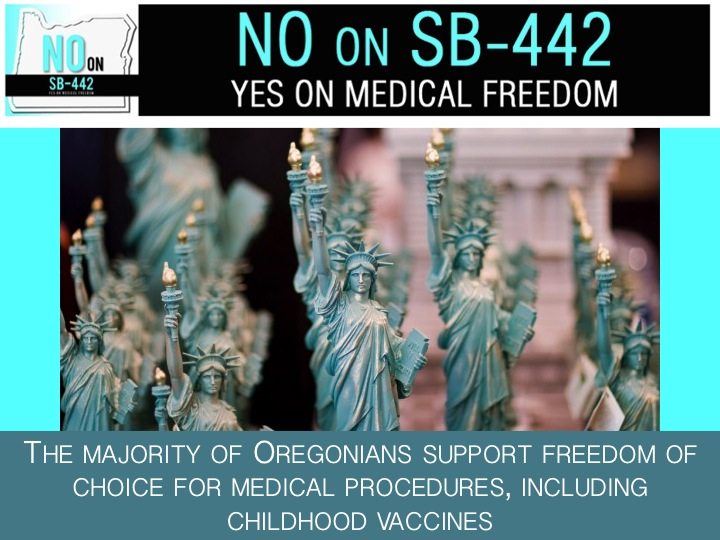 PORTLAND, Ore (March 3, 2015)—Last week, a large grassroots effort came together to form a coalition in opposition of Senate Bill 442-3, the controversial legislation regarding Oregon’s vaccination laws introduced in the Senate Committee on Heath Care in February.

The non-partisan political action committee, Oregonians for Medical Freedom (OFMF), formed to serve as a resource for Oregonians who are opposed to SB 442-3, and to help facilitate conversations with legislators as a ‘citizens’ lobby’ effort. In slightly over a week’s time, the coalition has grown to over 2,000 members.

The sponsor of the bill, Senator Elizabeth Steiner-Hayward (D-Beaverton), has introduced an amendment that would eliminate all personal belief exemptions from Oregon’s school immunization law. Children not receiving every vaccine and booster mandated by the State of Oregon (today 23 separate vaccines) would be unable to attend public school, private school, and many homeschoolers would also be impacted.

“The problem with this legislation is not at all related to one’s beliefs about vaccinations. We agree that vaccinations are very important to public health, and many parents who have joined the coalition fully vaccinate their children,” said Bob Snee, an attorney from Portland and the Committee Director of OFMF. “We believe this legislation strips Oregon parents of their fundamental right to medical freedom and informed consent when making medical decisions for their children.”

A statewide survey of 557 Oregonians conducted February 26 – February 28 by a Portland-based research firm showed that 61% of Oregonians agree parents have a fundamental right to healthcare choices for their children, whether those choices are based upon scientific research, medical necessity, philosophical beliefs, or religious values.

“This is a civil liberties issue, plain and simple, and Oregonians shouldn’t stand for it,” said Snee. “Our coalition hopes to defeat this bill in an effort to protect the rights of Oregonians.”

Many believe the legislation to remove exemption rights is unnecessary because there is insufficient data to support that nonmedical exemptions are an issue in Oregon.

The Senate Committee on Health Care holds a work session on the bill, Monday, March 9 at 3:00pm. That same day, Oregonians for Medical Freedom is hosting a friendly rally on the Capitol steps at 1:00pm.

« Why Every Oregonian Should Oppose SB-442: My Testimony to the Senate Committee on Health Care
Oregonians Spoke and the Legislators Listened, Forced Vaccination is un-Oregonian »