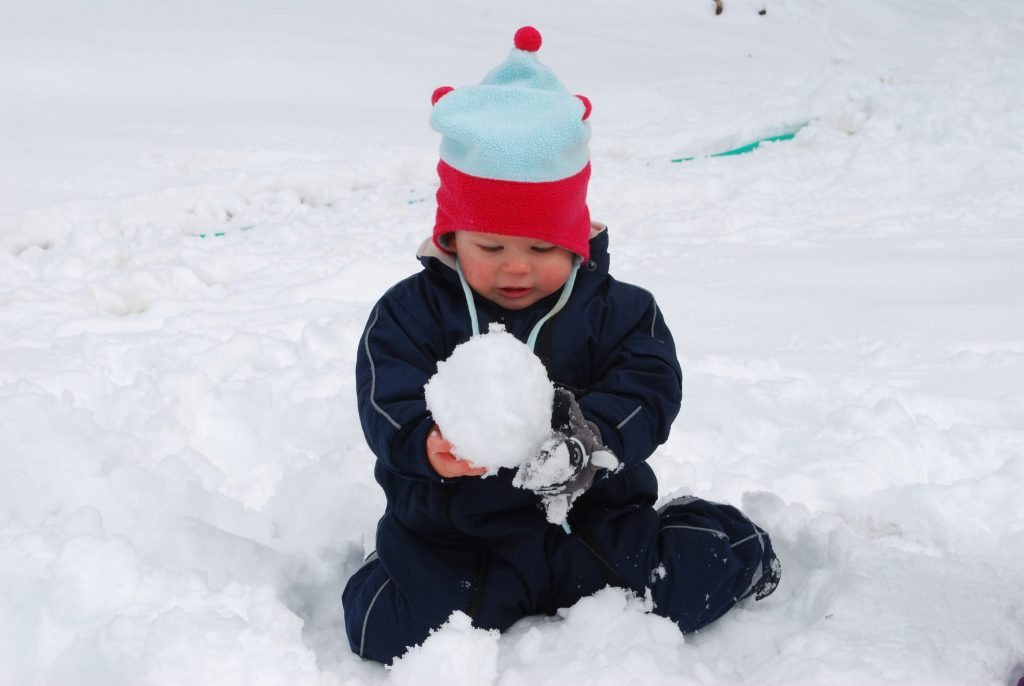 A toddler plays in the snow. When hurry becomes a habit and we rush our kids, everyone’s unhappy. Stop rushing, Let them play and take their time. Photo by Lora Horvath.

The little boy reluctantly but obediently turned to follow his father.

I watched them get in line. It was a hot summer day but the waterslides at Emigrant Lake were not too crowded. This was the first time we had been to them and I couldn’t help thinking we had found the perfect activity for a Friday afternoon.

But the man’s impatient words to his son were disconcertingly familiar.

When we still lived in Massachusetts every year a touring fair would come to the Amherst Commons. It was sleezy and thrilling, the way small touring fairs tend to be. My father-in-law was visiting us from Buffalo the same weekend of the fair.

He strode onto the Commons and bought a packet of tickets. My girls, ages two and three, clambered onto the carousel and held onto their horses with white knuckled grips, their mouths open in wide-eyed delight. The new baby, in a front pack, snuggled deeper into my chest and sighed contently.

After the ride my girls lingered to watch contestants try to reach the top of a rock wall on the side of a truck.

“C’mon,” my father-in-law motioned, putting his hands on their backs and herding them in another direction. Then he walked in front of them. “Hurry up,” he called over his shoulder. There was impatience in his voice. “We’ve got to go on the next ride!”

Hurry up? To the next ride? Better go as quickly as you can so you can go on the electric choo choo train. Come on!

It was easy to feel annoyed at my father-in-law. When James and I talked about it later he had the unpleasant memory of being a very small child and always being rushed. But it is harder to admit that if you ask every parent in the room who’s unnecessarily hurried their kids when there was no reason, my hand would be the first one up.

Hurry becomes a habit. So does scolding. Even when there’s nothing to be late for really, even when no one’s done anything wrong.

Why is it that when we take our children out to do something “fun,” we try to prescribe what they do? When it is the weekend? When we have the whole day before us? What harm is there in eating a snack before the water slides or lingering over the rock climbers?

It’s so hard for us—for me—to turn off the automatic pilot. To stop hurrying. To stop rushing. To stop stressing. To slow down. To let our children jump off the stoop 35 times when we really came to go to the museum or let them stop and run their fingers in the sidewalk cracks when we are supposed to be on our way to the park.

When my oldest daughter was two she received a box of hand-crafted, hand painted wooden alphabet blocks. “Rainbows!” she cried fascinated by the colorful ribbons, completely ignoring the present inside. Instead of letting her enjoy what interested her most, I opened the block box and tried to draw her attention away from the ribbons. I wanted the relative who bought my daughter the gift to feel like she had made a good choice and I was embarrassed that my toddler wasn’t more interested in the present. Despite my best attempts, my toddler had no interest in the blocks. But she liked the ribbons so much she brought them to bed with her.

These days I am trying to slow down as a parent. I am trying to let go of my expectations of what I think my children “should” be doing during fun time.

When I unnecessarily start to rush my kids I force myself to bite my tongue. I tell myself to breathe, and I try to pay attention to why I am feeling the need to hurry.

All these years later we still have those wooden blocks, and still play with them. Now I understand that sometimes wrapping paper is more interesting than the present inside. My daughter’s enjoyment of the present came later, on her own time

Related content:
Why is it so Hard to Let My Kids Enjoy Life at Their Own Pace?
Science Shows Breastfeeding Good for Babies, Bad for Business
Don’t Wash Your Hands Before Supper