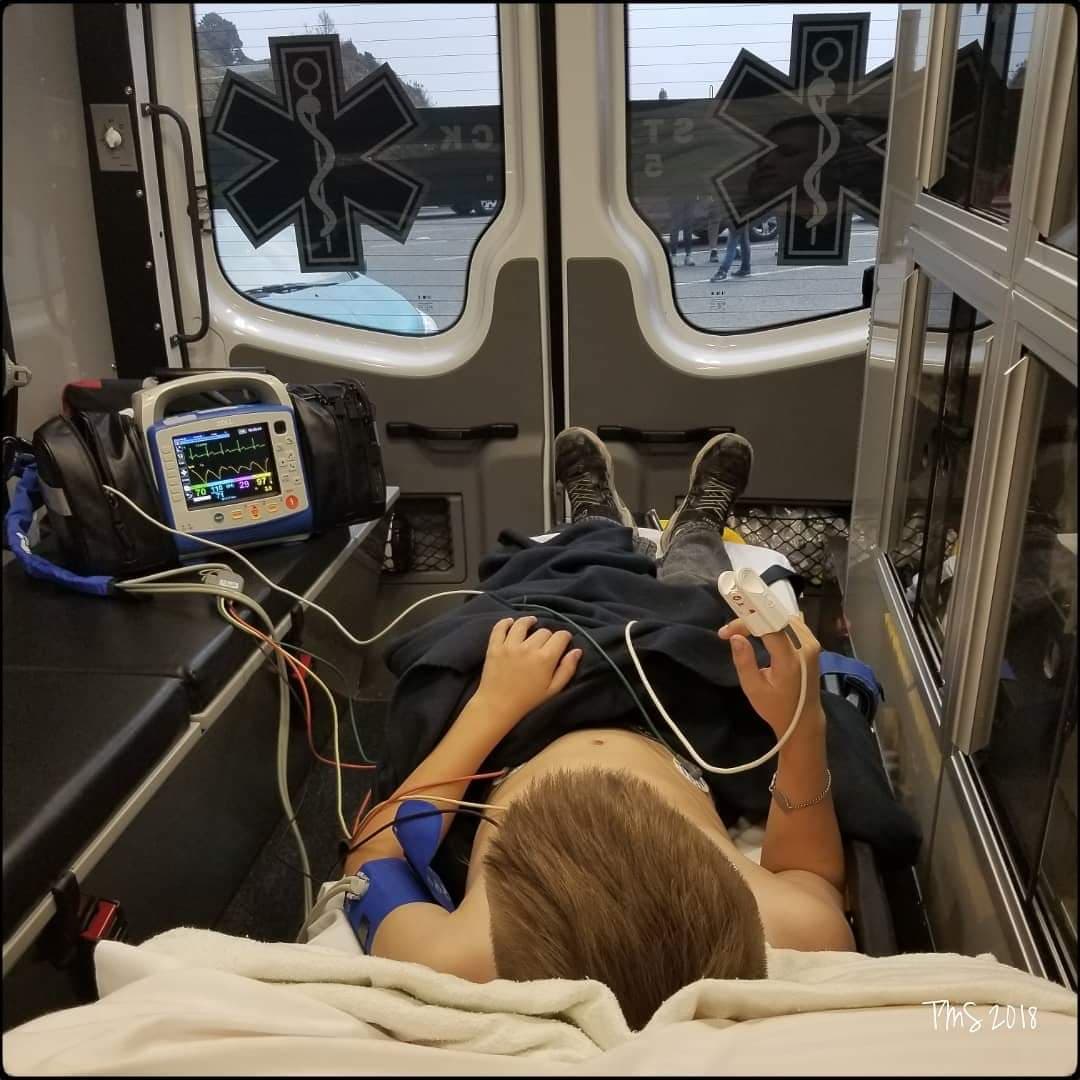 Andante, who is 11 and has life-threatening allergies to airborne allergens, being taken to the hospital after an allergic reaction to a bee sting. Photo courtesy of TinaMarie Spagnolo

Airborne Allergens Could Kill My Kid

By TinaMarie Spagnolo, special to JenniferMargulis.net

When I read the news that Cameron Jean-Pierre, an 11-year-old boy, died on New Year’s Day of an allergy to the fish his grandma was cooking, my heart broke.

Cameron went to his grandmother’s house. His grandmother was cooking fish. The sixth grader had a devastating reaction to the airborne allergens. According to the news reports, Cameron’s last words were to his father. He said, “Daddy, I love you, Daddy, I love you. I feel like I’m dying.” Cameron was rushed to Brookdale Hospital in Brooklyn, where he was pronounced dead.

Cameron Jean-Pierre could’ve been my son, or, even, my husband.

Like Cameron, my 11-year-old son has life-threatening food allergies.

Like Cameron, my son could die just from breathing airborne particles. 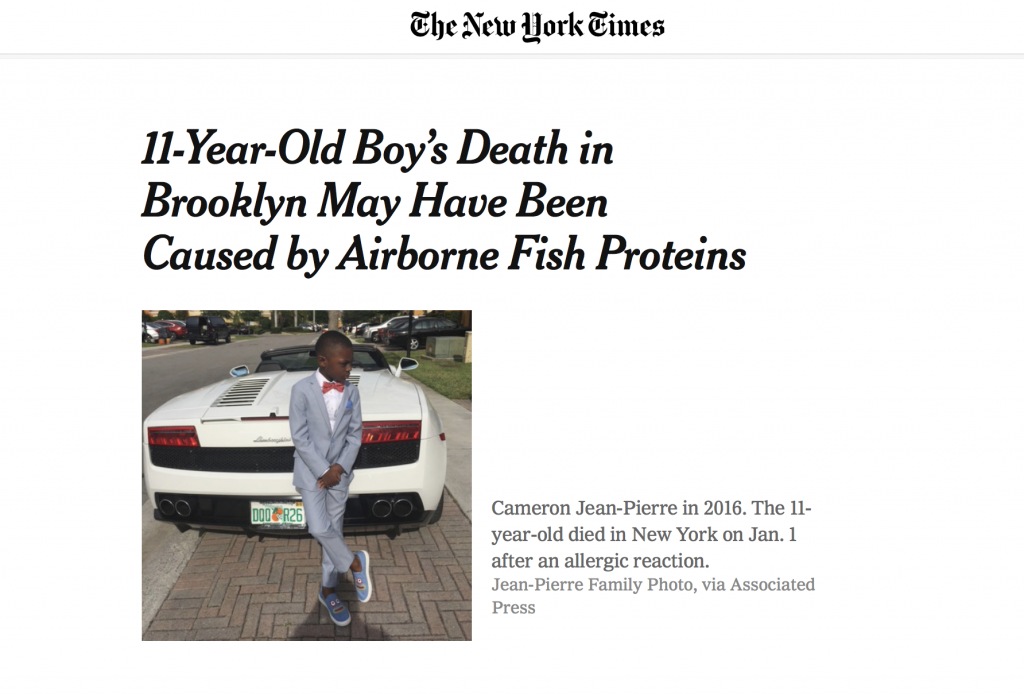 Sometimes life doesn’t happen the way you expect it.

I grew up, went to the university, fell in love, got married, had two beautiful girls.

And then had my son.

And that’s when life said, “Sorry, time for your next challenge!” and my entire life changed.

Apart from the first couple of days life in the NICU—because of breathing issues when he was born—he wasperfect.

Like his older two sisters, I breastfed him exclusively, even when the NICU nurses wanted to give him formula.

He had the hepatitis B vaccine, Vitamin K, his first hospital bath … everything a typical American baby has while in the hospital. When we were allowed to take him home, he came home to two over-adoring sisters and grandparents, and spent most of his first month in the arms of someone who loved him. Andante was a very easy baby.

And then, something changed.

A rash started to appear. 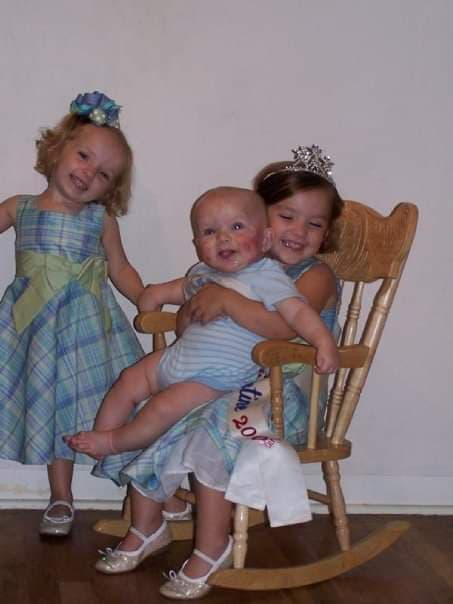 Baby Andante with his two adoring older sisters when severe eczema began appearing on his face and body. Photo courtesy of TinaMarie Spagnolo

A Healthy Baby Plagued With Eczema

Baby eczema, I was told. Try this lotion. Try that one. I tried them all. Nothing helped, and the rash kept getting worse. But even with the eczema, he was patient. Even though he scratched at himself, he did not complain or cry very much.

My son was an open, bleeding sore, itchy mess, and nothing was helping.

Finally, when my son was almost a year old, a family doctor who had grown up with my husband suggested I go on an elimination diet to see if it was something passing through my breastmilk, that was making my son react.

My breastmilk? How naïve was I? I had no idea that any harmful proteins could pass through my breast milk and harm my son.

So for 2 weeks my diet consisted of boiled chicken, rice, and some green vegetables like broccoli and spinach. I was miserable, but my son’s skin finally started looking like normal, soft, sweet smelling, tender baby skin.

After two weeks, our pediatrician suggested trying to introduce each of the top 8 allergens, one at a time, starting with dairy.

Wait, What? Why? Why would that make a difference?

I was confused but I figured the doctor knew best so I didn’t voice my concerns. I went back into my regular diet.

After breastfeeding him the first time on my regular diet, we saw almost instant inflammation on his skin.

So instead of continuing to attack his body this way, I decided to wean my son, giving him cow’s milk instead and making an appointment to have him tested for allergies.

His first sip of cow’s milk brought on the first reaction. He was not anaphylactic at this point, but he had a terrible reaction. And again, the eczema came back, stronger than ever.

After having him tested, we found out he was allergic to the top 7 of 8 most commonallergies: soy, wheat, dairy, eggs, tree nuts, peanuts, shellfish (not in severity order), so we changed his diet.

Life changing for our family, but doable … until his first bite of what we thought was soy cheese when he was 14 months old.

We didn’t know then that “lactose-free” doesn’t mean “casein-free.”

Casein being his second most prevalent allergen, our son went into anaphylactic shock immediately.

I gave him an EpiPen, an emergency medication used to stop an anaphylactic reaction. This was before EpiPens were retractable and I stabbed his thigh like there was no tomorrow and rushed him to the hospital in his car seat in the back of an ambulance, my husband and the girls racing behind in our car.

Four hours later, we were sent home with prednisone, a new EpiPen, and a referral to Stanford.

At Stanford University Medical Center, he was tested and shown to be more highly allergic than we thought. But what the tests didn’t tell us was HOW allergic he was.

Once back home, we started noticing reactions happening anytime something with milk or eggs was being cooked.

We noticed at the baseball park my son’s distress near the snack shack where the peanuts were roasting.

We then noticed how, in the supermarket, every time we passed the fish counter, both he and his father started turning blue and could not breathe.

Could airborne allergens be affecting my son and my husband? The entire family went in for testing, including my son, again.

We found this time that both my son and husband are deathly allergic to shellfish by contact, ingestion, and by airborne particles.

Airborne Allergens Can Kill a Child With Allergies

What? Airborne, you say. No way. That’s impossible.

We took my son back to Stanford and told his doctors that we noticed my son reacting to airborne allergens. They verified that in rare instances children (and adults) can have such severe allergies that even exposure to minuscule amounts of airborne allergens can cause severe reactions.

Sadly, the only people who didn’t act like we were crazy and overreacting were the doctors at Stanford.

The Stanford doctors documented in his medical records that our son was indeed susceptible to airborne allergens and that he had airborne allergies in addition to the other food allergies that he was already diagnosed with, and we were sent home with paperwork saying so. And that, along with a very savvy lawyer, is what eventually got my son into public school with only one of 6s Independent Education Plans (IEPs) in the nation for severe food allergies.

Getting him that IEP was a giant legal battle that took three years. While we were fighting, he missed going to kindergarten and first grade, unable to attend due to an unwillingness of the school to make accommodations for his disability.

After many appointments and meetings with lawyers and doctors and school boards, plenty of tears and words and threats, we finally got my son into school. Not with the best accommodations possible, but at least with enough accommodation to keep him safe from going into anaphylactic shock or worse from food allergies or airborne allergens.

That was almost 7 years ago.

Now, my son is almost twelve years old. We have had to argue and press for what is needed to accommodate him and keep him from dying of an airborne allergy.

To this day we are questioned on the reality of allergies to airborne particles. 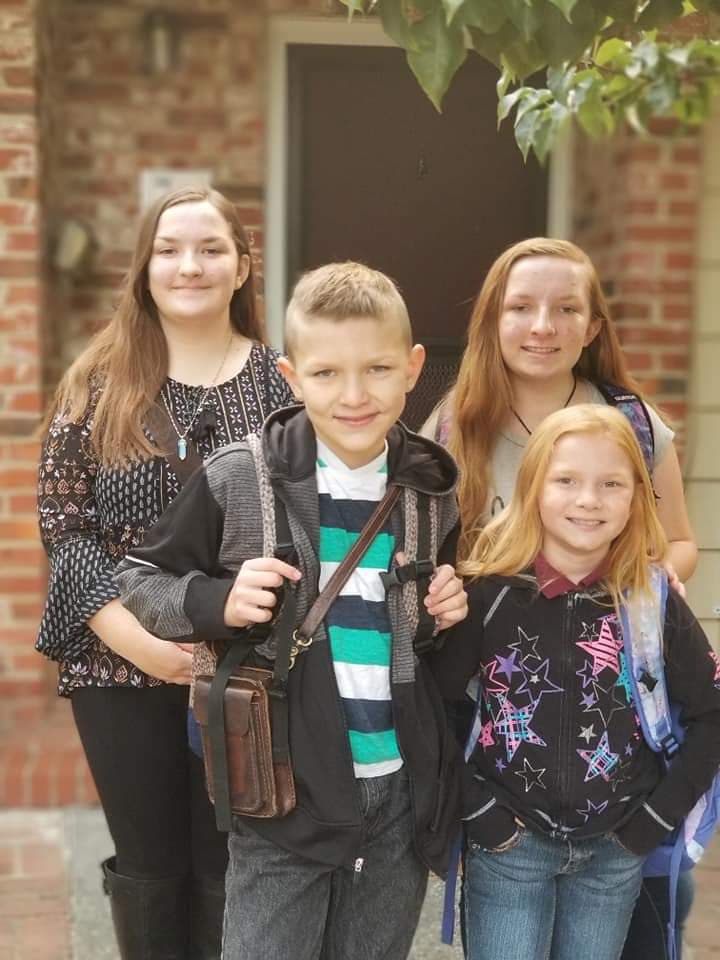 Life-threatening allergies are often an invisible disability, but airborne allergens could kill my kid. Photo courtesy of TinaMarie Spagnolo

Our son is “safe” at his school, but he lives the life of a semi-outcast. He has to sit at a separate table away from his friends at lunch to ensure that he doesn’t come in contact with any food or airborne allergens. He cannot have outside food items that are served in the classroom, as specified by his IEP. Because of that many people treat him differently, angry because they feel they can’t have classroom parties, since no outside food is allowed. It’s not the staff or the teachers who fight with us. It is, has been, and continues to be the school administration, people who are not with my son day to day.

Food Allergies Are an Invisible Disability

Parents of allergy kids want people whose lives have not been affected by allergies to understand that just like you, all we want is for our children to be safe.

Food allergies are an invisible condition.

You can’t just look at someone and know that they have a life-threatening allergy.

But just like with any other disability or medical condition, extra care needs to given to children with allergies.

If your child has never had an allergy or an anaphylactic reaction, it may be hard to understand that this isn’t about over-demanding parents, entitlement, or special privileges. It’s about survival. 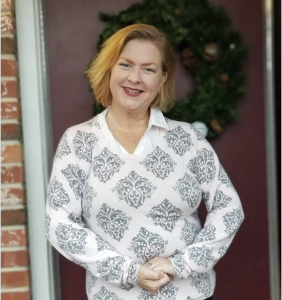 TinaMarie Spagnolo is an alumna of the San Francisco Conservatory of Music and a mom of four. She runs a Facebook support group, Food and Environmental Allergies League (FEAL), for families affected by severe allergies. The owner of Hillside Music Studio and a professional musician, she is also a soccer coach and 4H leader. She lives with her family in Willits, California.

« Vaccine Decisions: A Mom of 5 Questions Her Doc
11 Perfect Presents for an 11-Year-Old Boy »