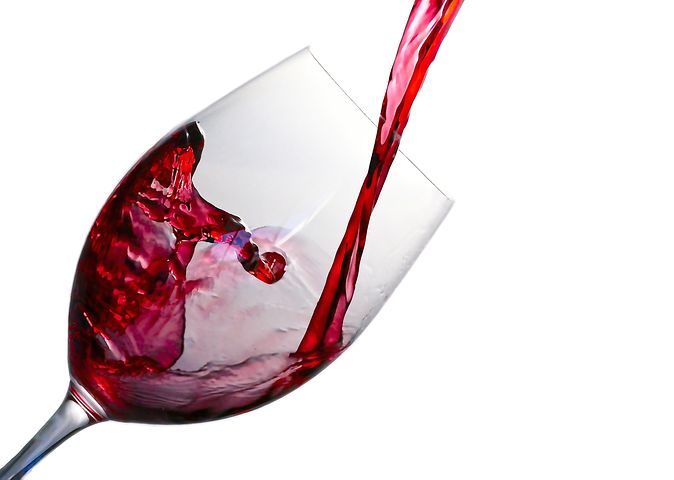 The view from the tasting room, overlooking Grizzly Peak and the Cascade Range, is as nice as I’ve heard.

But Weisinger Winery (3150 Siskiyou Boulevard; Ashland, Oregon), the first of many places that I visited as a local tourist in my own town of Ashland, Oregon, was disappointing.

Maybe it was because James and I biked from our house and were dressed in sweaty garb? The staff at the winery was courteous and solicitous to a group of four well-heeled tourists who came in after us, but they were just shy of rude to my husband and me. 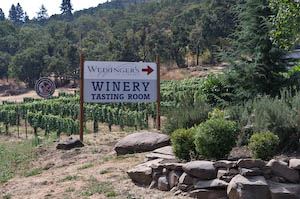 Our visit to Weisinger Family Winery in Ashland, Oregon was not nearly as nice as I had expected it would be

Instead of offering detailed information about each wine, they poured us our glasses distractedly. They did not tell us about the stomp competition that was happening that afternoon (and still had openings), even when I pressed for details. And they only reluctantly showed us the cheese and cracker menu.

The other visitors were offered a free tour of the winery. We were not.

Instead, we were nickeled and dimed. I’m used to paying for wine tastings but Weisinger Family Winery charged us even for crackers. They only had one cheese—the most expensive—on the menu (at a whopping $11.95) and after they cut it up and served it to us, other customers helped themselves. As well they should have. They couldn’t have known the cheese was on us!

But my biggest complaint is actually with the wines themselves.

I’m a huge fan of southern Oregon wines. I’ve written several articles, including this one, and this one, about wines in our micro-regions. Articles for the internet with titles like “Move Over California, Southern Oregon Win Takes a Stand,” as well as wine features for The Oregonian, and even an article on wine and hiking in Oregon for the New York Times. I think the high-quality wines being produced in southern Oregon makes it worth spending a little extra to enjoy them. But I actively disliked the taste of the Weisinger Family wines we were served begrudgingly, finding most of them unpleasantly metallic with too much acid.

Was it something in my glass?! Two of the three whites we tried left an unpleasant aftertaste in my mouth. James had the full flight—three whites and five reds—and he enjoyed them more than I. Though there were two that I found palatable:

The 2010 Petit Blanc was a bit sweet but flavorful.

The 2007 Claret was what James described as a “non-heavy” Bordeaux, with a complex aroma and a faint taste of cigar tobacco.

But though I liked the taste of these two wines, they did not seem worth paying $28/bottle for. 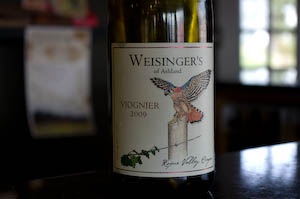 This Viognier from Weisinger Family Winery, which costs $26 a bottle, left the unpleasant aftertaste of pennies in my mouth

I always try to buy at least one bottle of wine at boutique vineyards to support local businesses and small agriculture.

Predisposed to like this winery and have a good time (it’s rare my husband and I get to spend a Sunday morning together), I left without buying a bottle and feeling rather ripped off.

We spent $23 on just the wine tasting and shared cheese.

“I can take or leave their wines,” a friend who loves wine said to me when I shared our experience later that afternoon.

On the way home, we stopped at Case Coffee, one of the several excellent coffee shops in Ashland. Their reasonable prices, cold-brew iced decaf, and friendly service helped wash away the disappointing experience we had at Weisinger Family Winery.