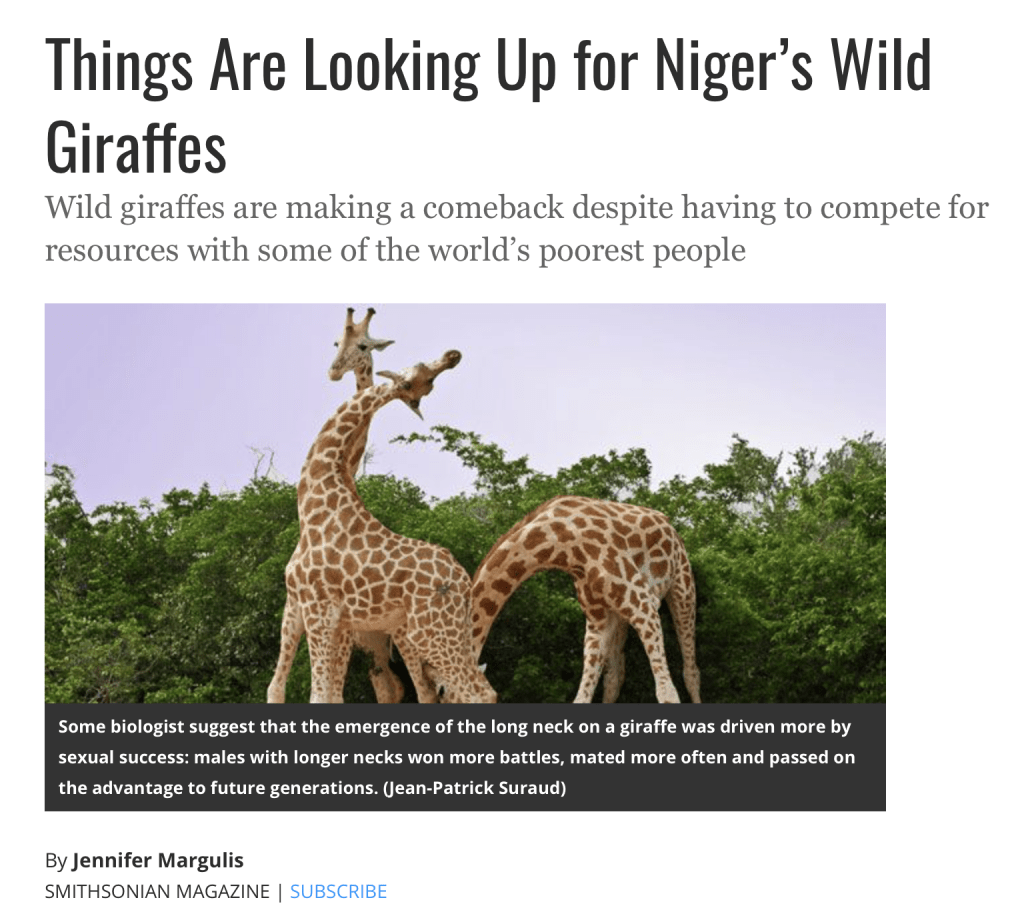 Things are looking up for Niger’s giraffes. Wild and free, adapted to a harsh environment, they are tenaciously holding onto life.

Niger’s giraffes. Beautiful. Majestic. Magnificent. Things are looking up for Niger’s giraffes is part of the subtitle of my Smithsonian magazine November cover story. With a herd of giraffes that is so small — there are less than 175 peralta giraffes left in the world today — too much optimism is foolhardy.

Here is the beginning of my article on Niger’s giraffes. You can read the press release about it here and the article in its entirety here.

In the dry season, they are hard to find. Food is scarce in Niger’s bush and the animals are on the move, loping miles a day to eat the tops of acacia and combretum trees. I’m in the back seat of a Land Rover and two guides are sitting on the roof. We’re looking for some of the only giraffes in the world that roam entirely in unprotected habitat.

Though it’s well over 90 degrees Fahrenheit by 10 a.m., the guides find it chilly and are wearing parkas, and one of them, Kimba Idé, has pulled a blue woolen toque over his ears. Idé bangs on the windshield with a long stick to direct the driver: left, right, right again. Frantic tapping means slow down. Pointing into the air means speed up. But it’s hard to imagine going any faster. We are off-road, and the bumps pitch us so high that my seat belt cuts into my neck and my tape recorder flies into the front seat, prompting the driver to laugh. Thorny bushes scraping the truck’s paint sound like fingernails on a chalkboard. I don’t know what to worry about more: the damage the truck might be causing to the ecosystem or the very real possibility we might flip over.

While Africa may have as many as 100,000 giraffes, most of them live in wildlife reserves, private sanctuaries, national parks or other protected areas not inhabited by humans. Niger’s giraffes, however, live alongside villagers, most of whom are subsistence farmers from the Zarma ethnic group. Nomadic Peuls, another group, also pass through the area herding cattle. The “giraffe zone,” where the animals spend most of their time, is about 40 square miles, although their full range is about 650 square miles. I’ve seen villagers cutting millet, oblivious to giraffes foraging nearby—a picturesque tableau. But Niger is one of the poorest, most desolate places on earth—it has consistently ranked at or near the bottom of the 177 nations on the United Nation’s Human Development Index—and people and giraffes are both fighting for survival, competing for some of the same scarce resources in this dry, increasingly deforested land.

There are nine giraffe subspecies, each distinguished by its range and the color and pattern of its coat. The endangered Giraffa camelopardalis peralta is the one found in Niger and only Niger; it has large orange-brown spots on its body that fade to white on its legs. (The reticulated subspecies, known for its sharply defined chestnut brown spots, is found in many zoos.) In the 19th century, thousands of peralta giraffes lived in West Africa, from Mauritania to Niger, in the semiarid land known as the Sahel. By 1996, fewer than 50 remained because of hunting, deforestation and development; the subspecies was heading for extinction.

Carey Winfrey, the editor in chief of Smithsonian, profiled me in his editor’s note. Here’s what he had to say:

Jennifer Margulis has been interested in Niger’s free-roaming giraffes for some 15 years, ever since she lived in that parched country working for a nonprofit development agency in 1992 and 1993. “It’s hard to put into words how incredible it is to see these animals in nature,” she says. “They are so tenaciously holding onto life—it’s incredible there’s even one left. But they are so well adapted to such a harsh climate.” They share that trait, she adds, with Niger’s citizens, with whom the animals must compete for scarce resources. “The history of the giraffe is very much tied in with the political situation in Niger. It’s a country that’s surprising because it’s so hot and so poor, and yet life is flourishing there.”

Reporting our cover story (“Looking Up,”), Margulis, who lives in southern Oregon and also writes about parenting, spent several days with French scientists observing the giraffes. “They are so affectionate,” she says. When they’re not nibbling on acacia trees, “they’re weaving their necks in and out and rubbing up against each other—just constantly physical and touching each other. It’s almost like they’re doing some kind of intricate ballet. To see the affection they have for each other—it’s just so beautiful.”

I love Niger. I’m so glad we lived there for a year when my kids were little. Niger’s giraffes are part of the astonishing wildlife in Niger. I hope you have a chance to see them.