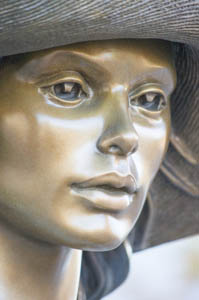 A bronze sculpture with lifeless eyes. This is how I’ve been feeling lately…

Summer time blues. I’ve got a bad case of them. So you may have noticed that I haven’t been spending much time around here.

Actually, you haven’t noticed because you’ve stopped visiting since there’s nothing new to read.

I could lie to you and tell you it’s because I’m so busy.

I could point you to the writing I’ve recently published, adding exclamation points for emphasis: A post for Beyond the Bris about how being Jewish helped me decide not to circumcise my son.

An essay for The Doula Guide on how to have a positive pregnancy and empowering birth.

I could tell you about the three articles I’ve been working on that are going to press: one on end-of-life issues and dying with grace for the Jefferson Monthly; one on a new ecotourism that is taking Eastern Oregon by storm for Oregon Business Magazine; and one on the inadequate screening of in-home health aides for the AARP.

But the truth is that I’ve been hit by a bad case of the summer time blues.

Summer time blues hits: two of my winter friends, Self-Doubt and Grief, have come for an extended stay

Fuck them both. They’re as welcome as rabid bats in my bedroom at night.

I’ve tried shooing them out with a broom. It isn’t working. They seem to have settled in. My friends tell me to exercise. This is good advice, easily given. But Self-Doubt isn’t having it. “You run too slowly,” SD says, “you suck at exercising.” Grief isn’t having it either. “You’re too heavy to go for a walk,” Grief tells me.

So I don’t exercise.

And then I feel worse.

This morning at 3:38 a.m. instead of sleeping I wrote a letter to my mom.

My mom would be the first person I would call. She would nod her head sympathetically when I told her how much my oldest and I have been fighting, remembering aloud how hard it was between us when I was that age; she would whoop at the news that I am going to be interviewed for an hour about my book on the Jefferson Exchange, a local NPR affiliate, on August 1, and that I’ve been invited to be a featured speaker at the Decatur Festival of the Book on Saturday, August 31; and she would wait impatiently while I told her that I haven’t been writing a new book proposal because I feel like I’ve forgotten how to write and I won’t do a good job.

Then she’d say, “Don’t be silly, Jenny. Stop indulging yourself and get to work.”

I would hang up the phone, turn off the internet, and knuckle down.

Only my mom isn’t here anymore. Which may be the real reason for these debilitating summer time blues.

She likes to talk about me dying, and her dad. “First you’ll die, then Daddy,” she says one day. “First Daddy is going to die,” she says another. “Then you.” I wonder if she is prophetic. If death is around the corner and only my three year old knows it is coming.

These summer time blues started when I opened some of the boxes I shipped to myself from my mom’s house.

The smell of her laboratory permeates my office now, a smell so familiar it feels like I am being stabbed in the guts.

I double over in pain.

“You look tired, Mom,” my 13-year-old says. She doesn’t realize my eyes are red and swollen for another reason.

“Stop being silly, Jenny,” my mother chides me. “I don’t want you to spend one second feeling bad on my account.”

My mother loved what she called a Chinese saying: grandparents die, parents die, then children die. When death happens in that order, it happens as it should.

I’m reading She’s Not Here: A Life in Two Genders by Jennifer Finley Boylan who was once James Boylan, a novelist and professor at Colby.

She was so seemingly successful as a man, with two young sons, a loving marriage, a good income, a novel that was optioned for movie rights, Richard Russo his best friend.

« A Mom’s Reflection on Pregnancy and Childbirth: Betrayed by a System that Makes Poor Decisions Based on Fear
Project Discover Ashland Place 5: Dagoba Chocolate Tasting Room »