From the article on Crater Lake snowshoeing adventures: 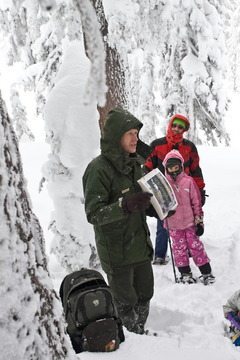 Ranger Dave Grimes holds up a photograph of lichen on a hemlock tree during the 1.5-hour interpretive snowshoe walk that he is leading. The author’s husband, James, of Ashland, Oregon, and daughter Hesperus, in the background. Photo by Jennifer Margulis.

If you’ve never been snowshoeing, you probably imagine you’ll crunch effortlessly atop acres of snow in your tennis-racket-like snowshoes, just like Yukon Cornelius, the blustery prospector who subdues the Abominable Snow Monster in “Rudolph the Red-Nosed Reindeer.”

But when my husband and I took our three children to Crater Lake on a squally Saturday in December, we grown-ups sank into the snow, flipping the powdery stuff into the faces of those who walked behind us.

The kids, on the other hand, had an easier time of it. They practically ran on top of the fresh snow. All three leapt up after falling, threw themselves down to make snow angels and buried themselves as if the snow were sand at the beach (brrr).

All of which helps explain why the free ranger-led snowshoe walks at Crater Lake are a perfect winter family activity.

The walks last 90 minutes and are different each time. We started ours near the Crater Lake Lodge.

We looked up to see icicles longer than baseball bats with dangerously sharp points clinging to the eaves. You don’t want them to fall on you.

Free ranger-led snowshoe walks take place at Crater Lake at 1 p.m. Saturdays and Sundays through April, weather and road conditions permitting. Check in at the Steel Visitor Center (541-594-3100). Snowshoes provided. Recommended for ages 8 and up. Reservations required. Wear waterproof shoes and many layers of clothing.

After that caution, Grimes briefed us on what to expect. He told the 15 people on the tour, some of whom came from as far away as Phoenix, that we would be hiking on moderately strenuous terrain and that he would tell us about how the animals and plants at Crater Lake cope with the harsh winters at such high altitudes.

He also told us not to walk backward in our snowshoes. So an adult and my son, 5, both tried it and fell down wildly.

Then we set off. Out of the lee of the lodge, it was windy and very cold — somewhere in the low teens without the wind-chill factor. The snow and wind beat on our faces as we trudged to a small grove of trees. I was wearing a facemask and two hoods, and my head was still freezing. But since snowshoeing is hard work, at least on fresh snow, I warmed up.

Once we hit a grove of mountain hemlock, we stopped for the first of three talks. Grimes explained that mountain hemlocks have downward-pointing flexible branches so snow falls off them easily and the branches bend but don’t break. He illustrated this by having a visitor wrestle a tree to the ground. It wasn’t much of a contest.

When we exited the other side of the grove, we saw animal tracks. We followed them, and at the next grove of trees we stopped to learn about the animals at Crater Lake.

Animals that abound in the summertime have three strategies of coping with the frigid temperatures and enormous snow dumps in the wintertime: migration, hibernation and confrontation.

The tiny Douglas squirrels that made the tracks confront the winter. Looking like chipmunks but with no stripes on their heads, they live in the treetops and survive on the hemlock seeds that they store in great piles during summer months.

If a snowshoeing group inadvertently trudges over one of these piles, the squirrels chatter and protest.

Voles and pikas actually survive in a subnivean layer, burrowing down and living at ground level underneath many feet of snowpack.

Large animals, like elk and mule deer, as well as the mountain lion that feed off them, migrate south to more hospitable grazing lands.

The walk ended up at the lake, but the sky was so gray and the sun so completely hidden by clouds that the water below could only be distinguished by small ripples caused by the gusting wind.

“Fifty percent of the time the lake’s not visible in the winter,” Grimes told us. He help up a breathtaking photo of Crater Lake on a sunny winter day, the sapphire water shimmering. “There,” he said. “Now you’ve seen Crater Lake!”

Afterward we had minestrone soup and watery imitation hot chocolate at the Rim Village Cafe. My husband’s toes were numb (he was wearing sneakers) and it took me several cups of coffee to get the chill out of my bones.

The trek, and the whole outing, was absolutely fabulous. Frigid, yes, but wonderful.

“It’s so beautiful out there,” said Albie Pokrob, 53, of Ashland, who was on our walk with his 7-year-old daughter, Sierra.

“And scary, when you get near the edge,” Sierra added.

There was only one drawback to this fabulous winter family activity: There are not many places to stay within 60 miles of Crater Lake in the winter. We drove back at nightfall on roads that were icy and snow-packed. A drive that takes less than two hours in the summer lasted almost four hours this time.

But, hey, gas is cheaper these days, and who can afford to go to Europe? Stay in Oregon, bundle up and take your kids to Crater Lake.

« Raspberry Island
McCloud: A Tiny Town on the Cusp »