Robert Coover will be reading in Southern Oregon. I’m looking forward to this event and delighted that it’s free and open to the public.

I’m eager, too, to read this new novel written by Robert Coover, The Brunist Day of Wrath. 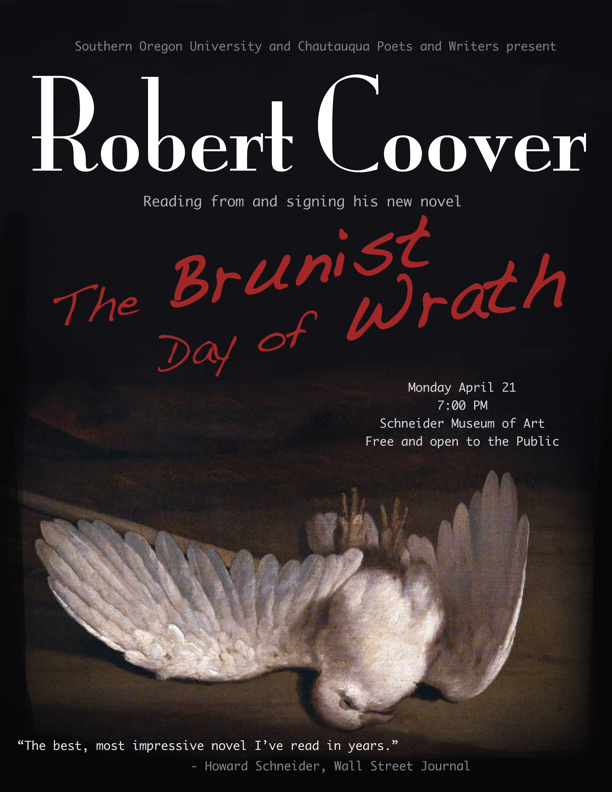 According to the Encyclopedia Brittanica:

Coover attended Southern Illinois University, Indiana University (B.A., 1953), and the University of Chicago (M.A., 1965). He taught at several universities, notably Brown University in Providence, Rhode Island, where he was a professor of creative writing from 1979 to 2012.

His first, and most conventional, novel, The Origin of the Brunists (1966), tells of the rise and eventual disintegration of a religious cult. The protagonist of The Universal Baseball Association, Inc. (1968) creates an imaginary baseball league in which fictitious players take charge of their own lives. Written in the voice of Richard Nixon and satirizing the national mood of the early 1950s, The Public Burning (1976) is what Coover called a “factional account” of the trial and execution of Julius and Ethel Rosenberg. Among his other works were Whatever Happened to Gloomy Gus of the Chicago Bears? (1987), which casts Nixon as a simpleminded and lascivious football player during the 1930s in a work that skewers the superficial 20th-century notions of the “American Dream”; Pinocchio in Venice (1991); John’s Wife (1996); Ghost Town (1998); The Adventures of Lucky Pierre: Director’s Cut (2002), the tale of an idolized pornographic-film actor who lives in a society of limitless sexual extravagance; and Noir (2010), Coover’s metafictional take on the hard-boiled detective story. His later novels included The Brunist Day of Wrath (2014), a sequel to The Origin of the Brunists, and Huck Out West (2017), which centres on Mark Twain’s classic fictional characters Huckleberry Finn and Tom Sawyer.

« There’s No Place Like Home: Why Having a Home Birth is a Good Option
My 4-year-old Has a Broken Heart »