I took my 9-month-old daughter and 6-year-old son to New York City during the first week of August to attend BlogHer. (To see a photo gallery of our trip, scroll to the bottom of this post click here.)

I wish I could feel as optimistic and enthusiastic about BlogHer as Beth Terry, who writes the very thoughtful and wonderful environmental blog, Fake Plastic Fish, which is now called My Plastic-Free Life.

As I wrote in the comment section on her excellent and thorough blog post about the event, BlogHer 2010 was my first BlogHer conference.

The blog I write at Mothering.com is called “Mothering Outside the Lines.” I’ve been blogging there for a little under a year. I’m under contract to update the blog three times a week. Though I think I’m getting the hang of it, I still consider myself very much a newbie in the blogosphere.

Though there is some advertising on the blog, this is all done by the Mothering staff and advertisers must adhere to Mothering’s strict code of conduct. You’ll never see an ad for a plastic diaper or a can of formula on Mothering’s site.

As a paid blogger, I have the luxury of not needing or accepting corporate sponsors. I have yet to do a giveaway or accept corporate swag (though after checking with the magazine editors and arguing with myself, I did agree to accept a uniquely designed cloth diaper made by an independent manufacturer after telling her that I probably would not be reviewing it on the blog. I have also had several wonderful books sent to me for free, though I have yet to write reviews of them.)

I went to BlogHer 2010 looking forward to learning more about blogging, meeting other bloggers, and understanding the role of social media in today’s changing ecosphere. I did attend a couple of excellent panels, most notably the one with Beth Terry on blogging and activism and the one with SheWrite’s founder Kamy Wicoff on social media and book publicity. But I came away feeling dismayed by BlogHer 2010.

As Beth Terry detailed in her post, the sponsor list included some really unconscionable companies and the organizers of BlogHer did a lamentably good job greenwashing the event.

The amount of swag was staggering.

The amount of waste and excess exactly what I am trying to avoid in my life.

I don’t want to think about how much trash was generated, how much food was thrown away, and how much cheap plastic shit will end up in the landfill as a result of a conference I attended.

The sentence that Beth wrote that rings most true for me: “[BlogHer is] also about corporate sponsorship, commercialism, and the tradeoffs made to create a platform and conference experience for 2,400 women.”

Maybe because I was there with a baby and I made poor choices about some of the panels I attended (at one the speaker was so disorganized that he spent most of the time looking for files on his computer that he could not find. I cringed with embarrassment. And then I headed to a different panel.) But I think it was much harder for me to get past the trade-offs and the ethically void corporate sponsors than it was for others who got more out of the conference.

From the devastating flooding in Niger to the oil spill in the Gulf that has made the water unsafe and has sickened sea life, we are being reminded on what feels like an hourly basis how urgent the problem of waste and excess is in our culture. We have to stop polluting the planet. We can’t greenwash events and think somehow pretending to do things differently is enough.

We homo sapiens are on a fast road to extinction (or at least to a greatly reduced population).

Some of the companies sponsoring the BlogHer event are so directly involved in creating and promoting suffering (for humans, for other animals, and for the planet) that I’m ashamed I attended a conference they were underwriting.

Instead of begging these companies to visit our blogs, we need to use the power of the Internet and social media–as Beth Terry does so eloquently and with so much integrity–to insist that these multinational corporations change. Now. For real.

Corporate greenwashing is intolerable. I think Beth Terry is doing it right–participating and criticizing from the inside in a thoughtful, well-reasoned way.

But I doubt you’ll see me at another BlogHer event, unless it’s outside on a picket line. 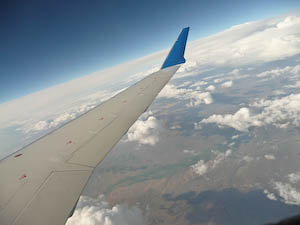 Etani shows signs of being a budding photographer as we trek 2,980 miles from Ashland, Oregon to New York City, New York 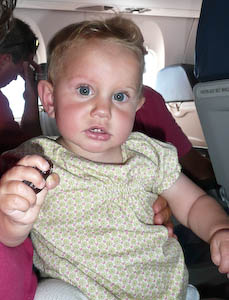 Why do I have to spend four hours on this airplane? And why is that man in the seat behind me holding his temples? And why, I wonder, did they put me and my brother and my mom in the very last row? 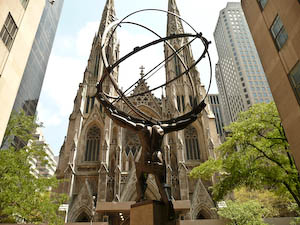 You may think this is a photograph of Atlas holding up the world with Saint Patrick’s Cathedral (the seat of the Catholic church) in the background but it’s actually pornography. What other scantily clad man is a naked woman allowed to admire? What do you think of those biceps? 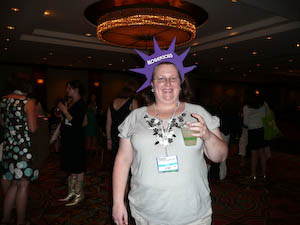 BlogHer 2010, forget the technology updates, bring on the booze (this is the only photo I took from the conference. It’s of a random blogger attendee. I liked her hat.) 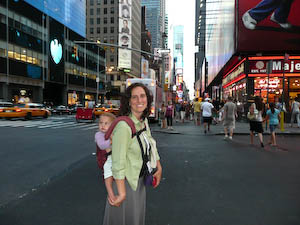 It’s Saturday night and the BlogHer 2010 conference is over. So why are that geeky mom and her baby walking the streets of New York City sporting a conference badge? 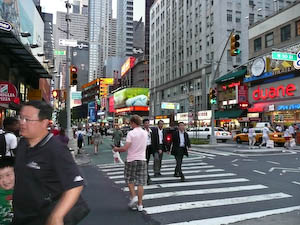 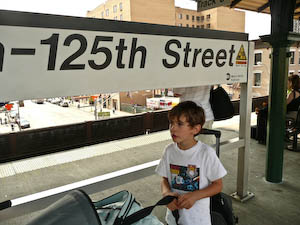 My son watches over the bags at Harlem 125th Street station where we wait for a train to Scarsdale. On board the conductors let him prove his strength by punching the ticket and tell him they have a uniform and name tag (if his name is Chris or Eric) all ready for him if he wants a job. Etani + train rides = happiness 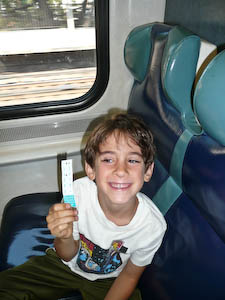 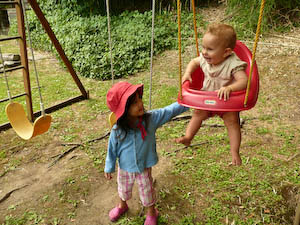 When you’re 9 months old, a 2-year-old cousin is all grown up. 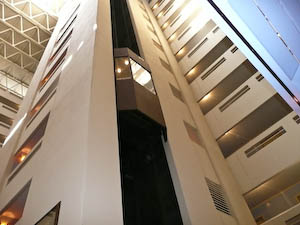 Who needs Disneyland when you can ride the elevator up to the 11th floor and back down again? This was the only redeeming factor of the hotel where we unhappily spent an extra night (due to thunderstorms in Denver we missed our flight.) 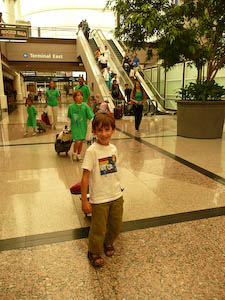 Homeward bound! my 6-year-old son pulls the luggage through the Denver airport after BlogHer 2010.

« The Woman in White by Wilkie Collins
Bankruptcy lawyers cash in: my new article in Oregon Business Magazine »