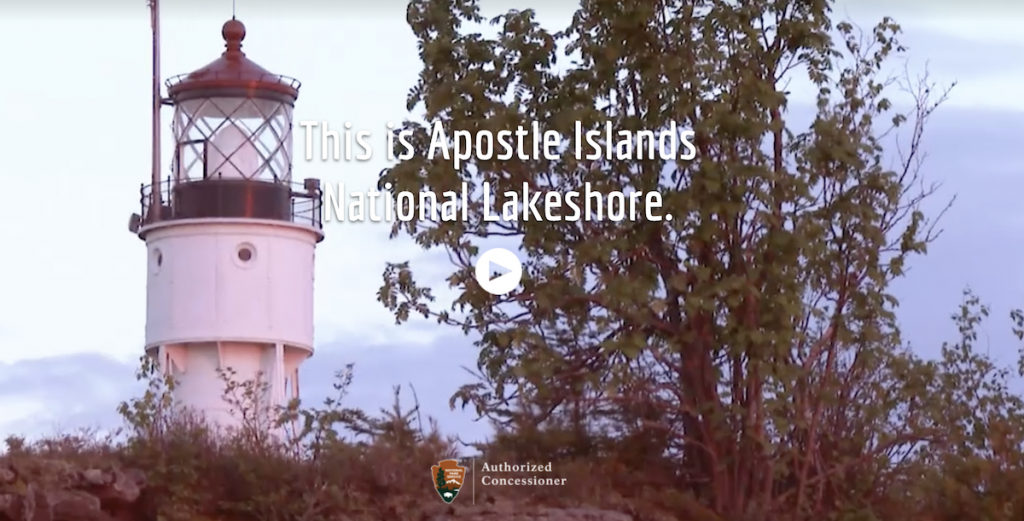 Raspberry Island, which is one of 22 islands in Lake Superior off the northernmost tip of Wisconsin, is a fascinating and wonderful place.

When an editor first asked me if I wanted to go to the Apostle Islands, I asked, “Are you sending me to Greece?”

I didn’t know there were islands in Lake Superior.

Of all the family travel destinations I visited this past summer for work— including Cancun, Montreal, Salt Lake City, southern Utah, and the Oregon Coast—the Apostle Islands were my absolute hands-down favorite.

Bayfield, Wisconsin, a town of less than 700 inhabitants, has the best candy shop, the most breathtaking orchards lush with berries (and later apples in the fall), and the nicest folks around.

To get there from Medford, Oregon means two airplanes (first to Minneapolis and then to Duluth), a rental car, and a 2-hour drive north on an interstate marked south. I had to pull over and call my husband, asking him to Googlemap it and make sure we were going in the right direction. It was 1:00 a.m., the road was pitch black, and cell phone coverage was spotty. But sure enough, you go north on a road marked south.

You’re in a spot in America that is far from everywhere but it’s absolutely worth the trek.

“Welcome to Raspberry Island,” Ranger Jim Stowell cries as a group of some ten passengers debarks the Ashland Bay Express, a small diesel boat that brings visitors on the 45-minute ride through the choppy waters of Lake Superior from the tiny mainland town of Bayfield, Wisconsin.

“Your cell phones won’t work out here, there’s no Internet. Look around, you won’t even find a trashcan. Let go of your mainland worries right here and right now and enjoy yourselves, folks. You’re on island time.”

Island time. A fresh breeze blows off the water, the sky shimmers sapphire blue, and the sun plays hide-and-seek with billowy white clouds. The air is redolent of flowers blossoming and wild berries ripening, and the sounds of wildness—from the caw caw of gulls to the scamper of insects—add to the sense you have the moment you step off the boat that you have arrived somewhere special, where nature, not human, is king.

Raspberry Island is one of Apostle Islands, the 22 islands in Lake Superior, off the northernmost tip of Wisconsin. Like the other 20 islands that comprise the Apostle Islands National Lakeshore, Raspberry Island is protected by the National Park Service and uninhabited by humans. Only Madeline Island (which at 14 miles long and 3 miles wide is the biggest of these islands) is inhabited year round—the some 200 year-round inhabitants grows tenfold as more than 2,000 visitors and seasonal homeowners come to Madeline Island in the summertime.

Like other islands in this heartbreakingly gorgeous wind-swept archipelago, Raspberry Island is reachable only by boat from mid May through October. After that the harsh winters make these islands virtually inaccessible to humans, though animals adapted to survive in the bitter cold and snow—including snowshoe hares, foxes, and coyotes—frequently trek across the ice from other islands and the mainland.

The first thing you see when you dock is a steep set of stairs with a rusty old tramway beside it, built in 1902 to roll supplies up the high bank that leads from the water to the island. At the top of the rocky steps is the island itself, with a 19th century lighthouse on one side, a lawn and vegetable garden in front of it (to simulate what it looked like when a light keeper and his family lived there) and myriad paths that lead into the old growth forests. Although some trees were cleared to build the lighthouse itself, Raspberry Island is the only Apostle Island that was never commercially logged. Its forests are full of sugar maples, red maples, paper birch, white cedar, balsam fir trees, aspen, and some white pines and red pines down by the sandy soil of the beach.

From 1863 until the mid 1950s the lighthouse on Raspberry Island was in operation and part of a visit to the island includes touring the light keeper’s stately house (it was completely renovated in 2006) on the bluff at the southwest tip of the island. Ranger Stowell will even sing “The Lighthouse Keeper’s Blues” in a hearty, sorrowful baritone to illustrate the loss felt by some when lighthouses became automated in the 1920s.

The house itself is decorated with period furniture and full of interesting artifacts but for the nature lover it’s the view from above that trumps all. From the top of two sets of wooden stairs and a steep ladder, you can see islands all around: Bear Island, Otter Island, Manitou Island, Oak Island. Bald eagles that nest undisturbed on York Island fish in the waters around Raspberry Island and we see three soaring overhead, recognizable not so much by their white head feathers and dark brown wing feathers but by the unhurried, almost slow, flapping of their broad wings against the bright blue sky.

There are trails through the old growth forests that lead to the sandy beaches on the other side of the island. When you walk down to the water along the 1.5 mile rolling trail the air is even sweeter here with the smell of flora: the thick underbrush is lush with thimbleberries, wild blackberries, and flowering blue-bead lilies. You’ll hear the rustle of the wind through the trees as you walk, and the lap lap lap of the water in this, the largest of the five Great Lakes in North America.

You’ll also hear the calls of songbirds. The Apostle Islands, one of the most heavily traveled flyways for migratory birds in the Great Lakes region, see birds stopping through during the spring, summer, and fall months. In the spring, migratory birds rest on the islands prior to crossing the lake and going north to Canada and Alaska. In the fall, the islands are the first land the birds come to during the long trek south. Migratory songbirds, including warblers, sparrows, juncos, and horn larks fill the air with their song. On Raspberry Island the thick, dense underbrush of shrubs like Canadian Yew, as well as the dozens of trees make the island an ideal place for nesting birds as well. According to Neil Howk, assistant chief of interpretation, there are over a dozen species of warblers that nest on the island, as well as thrush and ovenbirds. These birds nest right on the ground, and the dense shrub gives them perfect protection.

The Canadian Yew that shelters the birds is eaten to the ground on other islands by the wild deer that roam in this area. Howk tells me when I talk to him on the phone after the trip that no one has ever spotted a deer on the 300 acres that comprise Raspberry Island, and no one knows definitively why. (One theory is that deer prefer the islands that had been clear cut and now have young forests growing on them.) Black bears swim over from time to time but don’t stay long. In 2008 clear evidence of bears—in the form of droppings—were found near the lighthouse. And sometimes, in the light of a summer evening, you might spy as many as a dozen snowshoe hares on the lawn nibbling on the vegetables in the model light keeper’s garden.

When you burst from the forest path onto a completely deserted beach, the lake water looks clear and sparkling and cold. The sun has emerged victorious from the clouds and the cold water beckons. There are no boats in sight, just the jutting land of other islands in the distance.

The Ojibwe once inhabited these islands, using birch wood for canoes and gathering berries in the summertime. Later white settlers tried to make a living on the islands quarrying brownstone, logging, and pioneer farming. But now this area has reverted back to the animals and plants that survive here so well without disruption from human co-inhabitants. Too soon it will be time for us, too, to go back to the mainland and leave island time behind.

Unless you’re interested in ice hiking, snowshoeing, and dog sled races, the best time to visit the Apostle Islands is in July and August when the weather is warm and the water welcoming.

If you don’t have your own boat, the Apostle Islands Cruise Service (www.apostleisland.com; 1-800-323-7619) is authorized by the National Park Service to bring visitors to Raspberry Island. They offer a Raspberry Island Keeper’s Tour from mid-June to September 1st, which leaves daily from the dock in Bayfield, WI, depending on the weather and the number of passengers signed up (tickets cost $40 for adults and $24 for children, and there is an additional Park Service Interpretive fee of $3 for individuals, $8 for families if you choose to tour the lighthouse). Call ahead and reserve a space. Passengers hoping to visit the island in early fall to go bird watching may find passage available though inclement weather and choppy water sometimes keeps the boats from running.

Lodging is available on Madeline Island and in Bayfield, on the mainland. On Madeline Island, try the no frills Island Inn (852 Main Street, La Point, WI; 715-747-2000), located next door to the Madeline Island Historic Museum, less than a block from the ferry. In Bayfield, get into the lighthouse spirit by staying in the guest suite above the Bayfield Coffee House (39 South Broad Street, Bayfield; 715-779-9900; http://www.bayfieldcountycoffee.com/lodging-new.html), which is decorated in a lighthouse motif.

« Back From Klamath Falls, Oregon
Ski and Snowshoe at Crater Lake, Oregon »