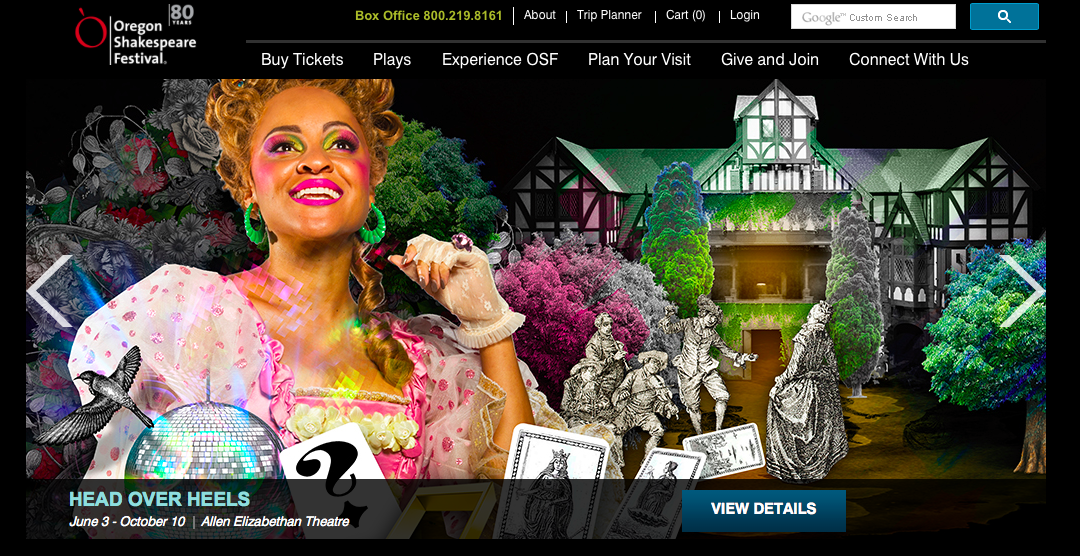 Screenshot of the official website of the Oregon Shakespeare Festival

Isn’t that why every tourist comes to Ashland, Oregon?

A white-haired man was walking his dog around town a few days ago as my 5-year-old and her friend were sprinting down the sidewalk, hanging upside down from bike parking racks and walking on every wall.

I recognized the man. “We almost ran you over earlier,” I confessed. “Sorry about that.” My 16-year-old had driven us downtown and forgot to brake at the crosswalk.

“I didn’t notice,” he laughed. “I’m from Southern California,” he said. “There aren’t even crosswalks where I live.”

“Just passing through,” he said a bit sheepishly. “But next year I’m going to a play for sure.”

We’ve lived in Ashland for eleven years and two days. Moving from Massachusetts to this small city of 20,000 was one of the best life decisions I’ve ever made. If you’re reading this you probably already know that there is so much here: mountain paths for hiking, a 20-mile bike route, rafting on the Rogue River, boutique shopping, fine dining, an excellent public high school, and one of the best food cooperatives in the country, to mention just a few.

And then there’s our world-class theater.

The Oregon Shakespeare Festival is much loved and appreciated by Ashland locals. Many of our friends work for the Festival. Dozens of high school students and Ashland residents get involved, both as volunteers and professionals.

That said, for someone who has never been to it, the Oregon Shakespeare Festival (also known as “OSF”) is a little hard to explain.

It’s not really a “festival,” because the season lasts for nine months.

It’s not really “Shakespeare” because it runs lots of contemporary plays, original plays, and Elizabeth plays written by playwrights other than Will.

(And, besides, one of my colleagues, Mark Anderson, argues the “Shakespeare” plays were not actually written by William Shakespeare.)

At any given time, nearly a dozen plays are running in three different theaters in Ashland, one of which is a gorgeous outdoor venue with an Elizabethan façade.

But, as any local play buff will tell you (if she’s being honest), OSF can be a little hit or miss.

I’ve seen plays to rival those running on Broadway, including the 2005 By the Waters of Babylon, which was absolutely brilliant.

And I’ve seen some bombs.

But this 2015 OSF season is outstanding and not to be missed.

We’ve seen Guys and Dolls twice already and I would like to see it again. The choreography is breathtaking, the cast fantastic and energetic, the clever use of miniatures in the set both startling and delightful.

Despite the unfortunately cheesy ending, Head Over Heels is brilliant, irreverent, and fun, combining music from the Go-Gos with a 16th century pastoral romance by Sir Philip Sidney. The gender-bending in the play may be the best part. The whole production is campy and hilarious.

Though no one in the cast knows how to do a working class Pennsylvania accent correctly (which made this East Coast native cringe), Sweat is a painful and provocative look at what happens in a factory town when the economy starts to tank.

My 11-year-old son and I also loved The Count of Monte Christo.

Other plays that are running until the end of October include:

Much Ado About Nothing

Pericles (which I’ve been told is excellent, though I haven’t seen it yet.)

Antony and Cleopatra (ends on October 9) 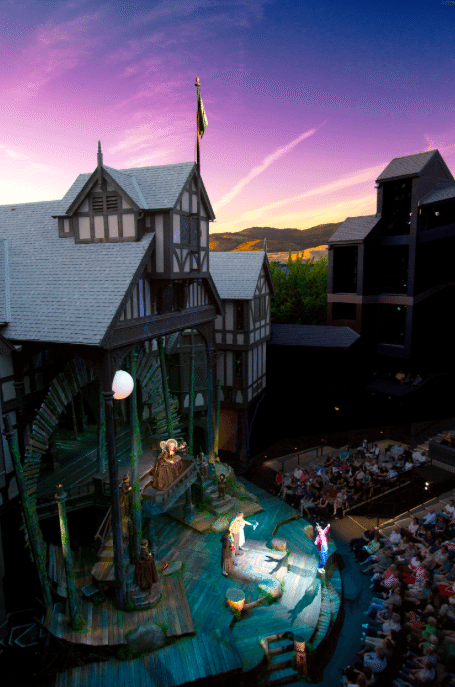 In all the years we’ve been seeing plays, we’ve walked out of two. That might be as much about my husband and me as about the plays. (An 8 p.m. start time is late for parents with young children and as a local I cringe when I see an actor playing in several plays but not changing his accent, gestures, or personality to fit the role). In the interest of full disclosure I have to confess that one play my husband and I walked out of is from season. Just don’t go to that one (no, I’m not saying which one it is. Hint: It’s not included on the above list.)

But if you aren’t a well-heeled tourist of a certain age, how do you afford tickets to see OSF plays?

If you make a tax-deductible donation and become a member of OSF, you can buy a Flex Pass for the season.

You can get same day rush seats at half price or even less for students and younger theatergoers.

There are often $30 tickets available in the handicapped sections of the theaters—not the best seats in the house by a long shot but a great deal.

And if you volunteer enough hours for the Festival or perform at the Green Show you can also get free seats.

Plus there are the family days, when tickets cost $25. Yes, it’s still more expensive than the movies, but seeing live theater with your children is an experience not to be missed.

If you’re in town and strapped for cash and dying to see a play, there’s still hope. Go to the free outdoor Green Show and look for the teachers leading student groups. Ask if they have an extra ticket to give away. Take $10 out of your pocket and hand it to them, if that’s all you can afford. Chances are they’ll take your greenback and give you the ticket.

What else is there to do in and around Ashland?

Eat a gourmet lunch at one of these tasty new restaurants

Take a weekend trip to the Oregon Coast

Disclosure: I do not benefit financially if you click these links or see a play at OSF. Though I paid to see most of the plays mentioned above, I was also given comps by friends who work at OSF for my birthday this year. I have also received reduced media rates to some performances in previous seasons.