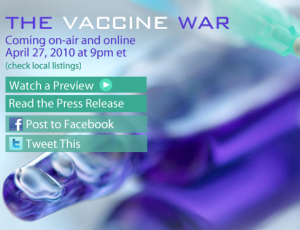 I am featured in the PBS FRONTLINE documentary, “The Vaccine War,” which airs tomorrow night, April 27th, 2010 at 9 p.m. in most places.

Tomorrow (since I’m writing this at 9:30 p.m. after having spent all day on airplanes returning from New York City where I was at the American Society of Journalists and Authors meeting) the PBS show “Frontline” will air a full-hour investigative piece on the vaccine debate.

A producer and a cameraman came to Ashland, Oregon when Leone was just a few weeks old and spent hours interviewing me, following us around town, and taking B-roll of the kids.

The PBS press release makes it sound like, instead of seeking to understand the problems with our current vaccination system, they are setting up a false dichotomy of “us” versus “them.” That dichotomy does little to advance children’s health but a lot to line the pockets of the pharmaceutical industry.

They’ve decided to call the show “The Vaccine War” and I wonder if–as a parent who choses to vaccinate my children on the most evidence-based and scientific schedule (which is not the CDC’s)–I will be portrayed in the episode as selfish, thoughtless, and unconcerned about the greater good.

The opposite is true: Parents who research vaccines and the medical doctors who support them are usually the ones who make careful choices about vaccination and care most about the greater good.

You can watch the trailer:

We don’t have a television at our house. I plan to watch it at my friend Shannon’s. (But I forgot that James will be out of town and I haven’t arranged for a babysitter. Oy.)

ETA: The documentary is now available in its entirety on YouTube.

Will you be tuning into PBS? “The Vaccine Wars” airs tomorrow night at 9 p.m. ET and then will be available for viewing on the internet.

« Traveling to Chicago, NY, and LA
Gold Beach is Rich with a Jet Boat Load of Natural Treasures »