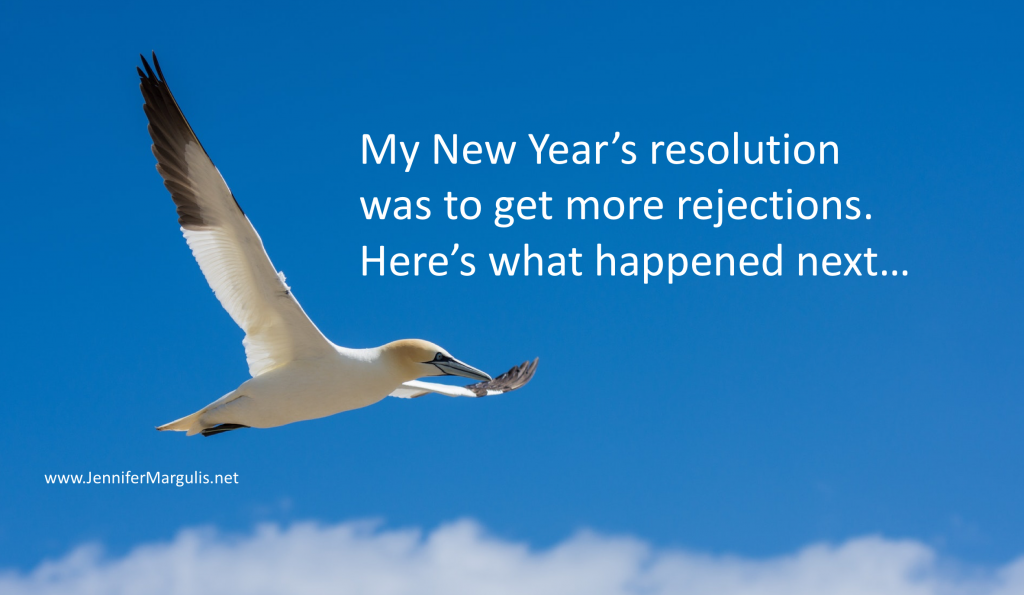 I resolved to get more rejections.

I need to write that again in case you’re reading quickly. I resolved last year to get more rejections and I’m resolving to do the same this year.

Why would anyone want to get more rejections?

I hate to be rejected.

It hurts when someone says no to something, for whatever reason.

In Psych 101 at Cornell University, where I went to college, we learned about two kinds of personalities: the people who believe bad things are just “situational,” temporary glitches in an otherwise sound world; and the people who take bad things as “dispositional” and attribute their failures to a lack on their own part—to their own unworthiness or incompetence.

The personality test assigned me to the latter category, an even better reason to eschew failure no matter what.

But if you’re scared of failure and rejection, guess what? You can’t succeed.

No one can reject you if you don’t apply, but no one can accept you either. I remember hearing about the manager of a wildly successful computer company who came storming into the office one day saying, “this is just not acceptable!” His employees were utterly perplexed.

Their ideas had been working well, the company was at maximum profits, and here was their boss angry with them.

“You are not failing enough!” the boss insisted. “If you don’t fail, you’re not pushing the envelope. I want real innovation here. And real innovation means failed attempts. Now start making some mistakes!”

That’s what I set out to do last January—start making mistakes and get more rejections. I realized I was too complacent in my writing life and I wasn’t trying hard enough. I also realized that the only way to learn that rejection is not about me or who I am was to get more rejections.

The more I got rejected, I figured, the more I would be comfortable getting rejected.

Instead of wallowing in self pity, wondering why an editor vetoed my idea, I could send it out again and get more rejections, thus fulfilling my New Year’s resolution and learning to be a situational instead of a dispositional thinker.

I got scores of rejections.

But I also got something else: acceptances.

I broke into two writing markets I’ve been wanting to crack:

I also applied for an overseas fellowship, contacted editors at travel magazines, and wrote articles for the likes of Parents and Sunset magazines.

Since I needed to get rejections I couldn’t stay comfortable where I was, I had to look for new opportunities.

And the dozens of rejections I got—I can wallpaper our entire house with them—started to sting less.

But it’s not easy to keep a constant flow of rejections coming in and for awhile there was a lull.

The inevitable let down happened and I walked into my husband’s office (he also works from home) with a long face.

“So and so rejected my idea,” I sighed. “I thought this one would work. I can’t do this. I feel so bad.”

My husband gave me a hug. “There’s another way to look at it,” he said.

We both laughed and I went back to work.

In my in-box was a message from an editor wanting to assign me an article she needed written. This same editor had previously rejected no fewer than ten of my other ideas (but in an encouraging way, inviting me to send more). Persistence pays off.

I did a little happy dance.

That’s the thing about looking for rejection … along the way you may find what we all really want: acceptance.

Author’s note: This post was originally published as a column in the Ashland Daily Tidings. I also wrote about rejection when I was Literary Mama’s Creative Nonfiction Editor.

Related content:
Don’t Read This Sitting Down
When You’re a Writer Who Feels Like a Fake
On Professional Editing and Why I Charge my Friends for Advice

« How To Be a Better Person in the New Year
Why Doctors, Nurses, and Other Medical Professionals Are Choosing to Birth at Home »