Brett Paesel contributed one of my favorite stories to an anthology I co-wrote and edited, called Toddler: Real-Life Stories of Those Fickle, Irrational, Urgent, Tiny People We Love.

Like her new novel, Everything is Just Fine, her story in Toddler is laugh-out-loud funny.

In real life she’s charming and kind and also hilarious.

I’m thrilled that she’s written a novel now, after acting in and producing the Emmy and Golden Globe award-winning show Transparent and developing and writing shows for HBO, ABC, FOX, and Comedy Central.

The novel is about a group of Beverly Hills Junior Soccer League parents whose lives are turned upside down by the secrets they keep.

And so Los Angeles.

And you’ll love it.

Full disclosure: I didn’t sit down with Brett Paesel for the interview she granted me, because we live in different states, she had a nasty cold, and I wanted to get this up. So we’ve been communicating by email.

I’m saying this upfront because one of the issues this novel explores is how disconnected from face-to-face real-life contact we have all become 😬 .

Still, I’m thrilled to share this sneak peek into Brett’s writing process and her thoughts about fiction writing, and I think you will be too. 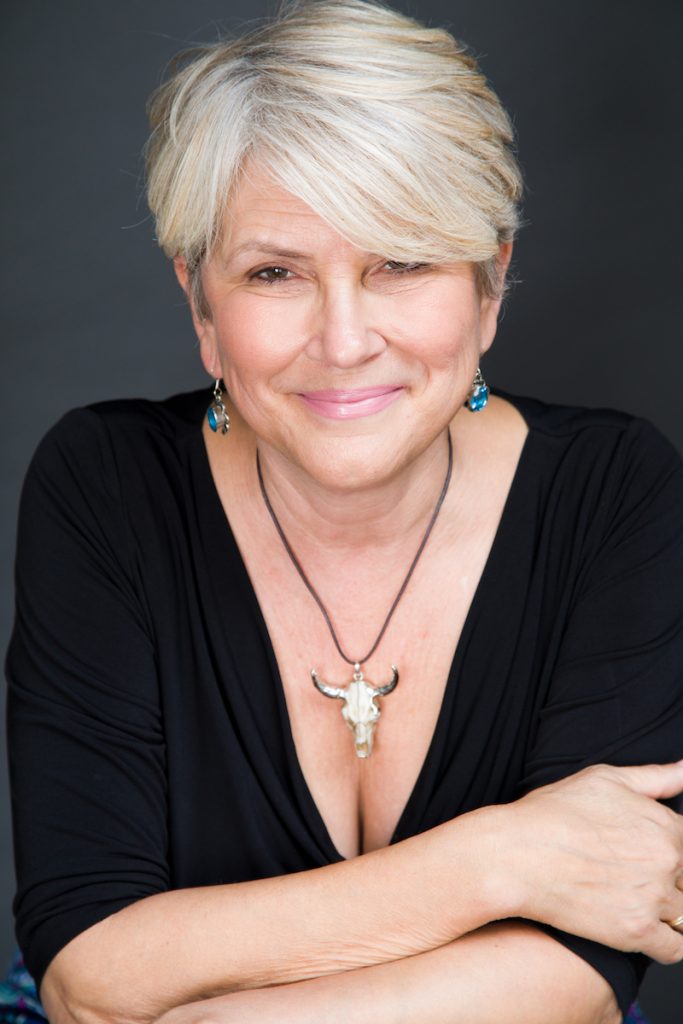 Jennifer Margulis: I’ve been a huge fan of your writing for a long time. But I’ve always thought of you as a non-fiction writer. When and how did you decide to write a novel?

Brett Paesel: I was inspired to do a short story inspired by the e-mails I was reading from the coach and parents on my son’s soccer team for ten-year-olds.

Initially, it was a simple parody.

But I found myself being drawn to the characters, not necessarily because they were outwardly sympathetic, but because I’m a parent too—and I know what it’s like to feel protective, and competitive, and to take everything personally on behalf of my child.

We’re in the soup together and I wanted to explore that.

I’d also begun to feel that non-fiction was limiting.

I didn’t want to write about myself all the time.

When I’m writing fiction, I become other people and it was freeing to write from the persona of a gorgeous 23-year-old male soccer coach, for example.

He was having a whole lot more fun than I was!

When I started writing the novel, I didn’t have a lot of faith in my own imagination.

I discovered that “making stuff up” was as much a function of practice as anything else.

Jennifer Margulis: What was your writing process like? Did you always work, say, in the mornings, or did you make sure you got a certain word count done every day?

Brett Paesel: I tend to be a fairly disciplined writer. I love this question, by the way, because I adore process and am endlessly curious about how other writers get their work done.

I have a morning routine that involves either meditation or exercise—during that time, my mind settles on a writing task for the day. It might be a rewrite or a transition or a new scene.

I have to sit down to write pretty soon after this, or the day gets hijacked by THINGS TO DO!!! (I wish I had a scary font for that).

So after I meditate or exercise, I go to a writers’ lounge and plug in my laptop. I turn off my phone and set it upside down on top of a piece of scrap paper that I use for a thought dump. If I think, ‘I have to pick up cauliflower, I write it down so I can stop thinking about it. Then, I spend about fifteen minutes reading something—it’s usually a book by an author I admire, or it’s a book that takes place in a similar arena as mine, or it’s a book that manages to accomplish something that I still find challenging.

After about fifteen minutes, I put the book aside, put on headphones that are playing unchallenging background music (atonal, Celtic, or classical) and I try to write a thousand words.

Sometimes, if the writing’s super challenging, I’ll settle for 500 words. I don’t kill myself if I don’t make the quota. That would simply make me tense.

JM: Writing teachers often tell aspiring novelists to “write what you know.” Did you follow that advice or is that a crock?

Brett Paesel: I think we tend to write what we know, anyway—otherwise how could we write it?

But do you have to have lived it?

Sometimes this adage has to do with writing about an arena you know something about—I don’t think that it’s difficult to research and build a world one has never been to.

It can be challenging, but not that hard, ultimately.

I do think, however, that it’s a lot harder to write about emotional and philosophical complexities that you have never experienced.

My nineteen-year-old son is a lovely writer and he writes about his friends and being in love and traveling.

My guess is that he would be less convincing writing from the point of view of a fifty-eight-year-old me. There are simply ways that I look at the world that he hasn’t experienced yet. 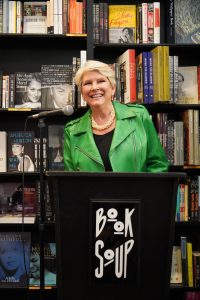 JM: What was the most rewarding thing about working on this novel?

I loved getting to know the characters.

I truly fell in love with them and was sorry when the process ended, because they had become part of my life.

I’d think about them during the day.

I would think about what their houses looked like or what they would order off a menu in a restaurant.

It was endlessly fun hanging out with them.

JM: What are you hoping readers get out of your book?

Brett Paesel: To me—even though it’s a comedy—the novel is about connection.

All the characters crave connection (as do all human beings, I believe).

But the characters in my novel mistake a lot of things for connection, only to find they’re hollow.

They think that sex or money or creating a public image, will deepen their feelings of connectedness. But they haven’t done the work of embracing who they authentically are—and so none of those things satisfy.

I want people to read the novel and get that in order to connect with other humans we simply have to show up.

Physically hold someone’s hand or cook them a meal.

It’s one of the simplest truths in the world, but we forget it all the time.

That’s why I use e-mails in the book.

One of the characters starts to think that one of his e-mail correspondents is the closest friend he has at the moment, and yet he rarely speaks to her in person.

I don’t mean to devalue the intimacy that the written word can certainly engender, but I would argue that e-mail, specifically, can create an illusion of intimacy that might be mistaken for the real thing.

JM: What’s one thing you wished you had known about the process before you started?

Brett Paesel: I wish I had outlined more.

It was my first novel so I went off on tangents that ended up being cut.

I would have saved time if I had plotted things out.

That said, I think outlines are meant to be guides and not rigid maps. 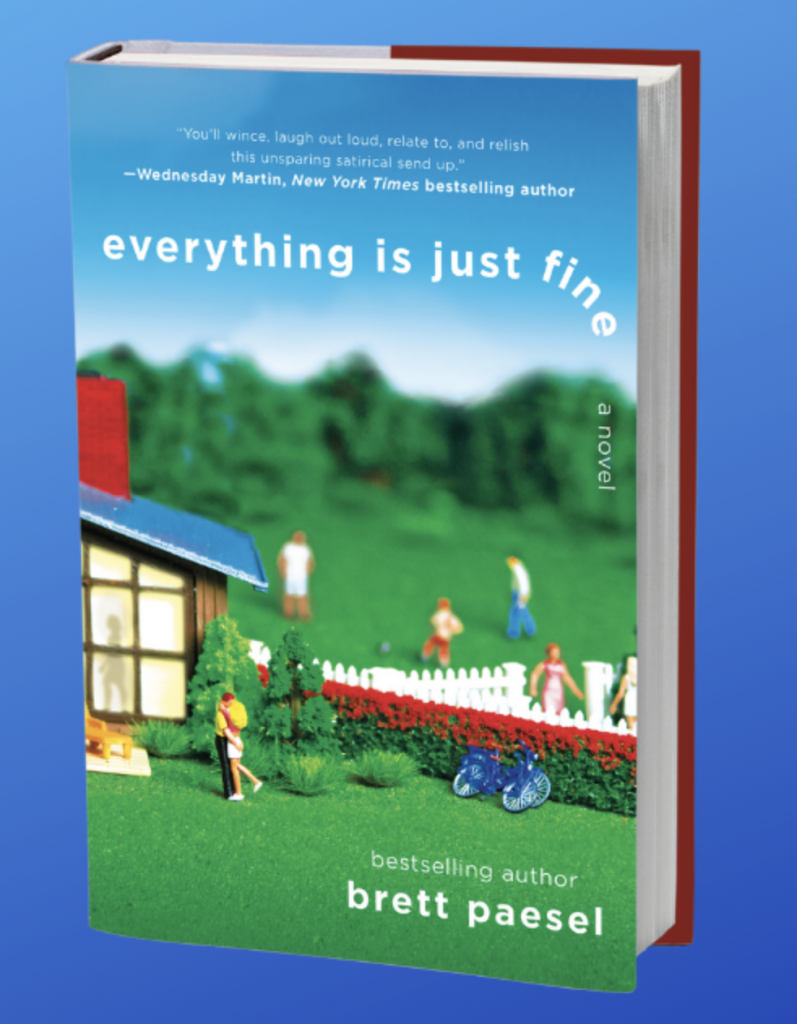 JM: What do you think of the cover? Did you get any say in its design?

I was hugely lucky.

They presented me with the art and parts I had input on had to do with fonts and word placements.

I had a couple of notes, which they incorporated, but none of them were important.

JM: The unfair last question (which you don’t have to answer): What are you working on now?!

BP: I’m working on another novel about family secrets and how, once discovered, they affect how we see our pasts differently.

About Brett Paesel: Brett Paesel is the author of the Los Angeles Times bestseller, Mommies Who Drink: Sex, Drugs, and Other Distant Memories of an Ordinary Mom (Warner Books, 2006) and the novel, “Everything is Just Fine” (Grand Central, 2019). Her work has been published in numerous collections and national publications including The New York Times, the Los Angeles Times, and on Salon.com. In Hollywood, Brett Paesel has been a consulting producer on Amazon’s television series, “Transparent” and “I Love Dick.” She has developed and written shows for HBO, ABC, Fox, Comedy Central, WB, Lifetime and Nick at Nite. As an actor, she was a cast member of “Transparent” (she played Rita) and HBO’s, “Mr. Show with Bob and David.” She lives in Los Angeles, with her husband and two sons. Learn more about her at www.BrettPaesel.com.

« Don’t Read This Sitting Down, Or, Why I’m Buying a Standing/Walking Desk
Autism Is My Problem: Report From AutismOne »