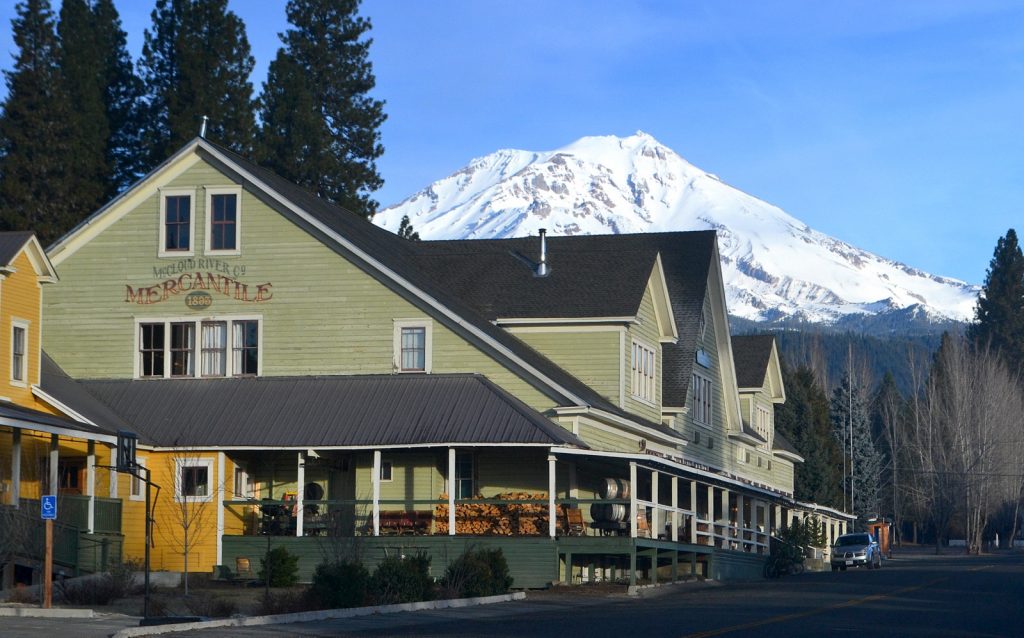 McCloud is a small town with a big heart in Northern California.

“McCloud: A Tiny Town on the Cusp” is the name of my article in The Jefferson Monthly about McCloud, California, which I’ve been working on for awhile. The full article is available to subscribers of Jefferson Public Radio.

One cloudless night three years ago Rhonda Hiebert, 49, and her sister said goodbye to some friends at the American Legion and were walking down Main Street in McCloud, heading back to their house. They walked on for a few minutes in silence when suddenly Hiebert had an eerie feeling that someone was following them. She and her sister turned around and saw a big black bear walking down the middle of the street.

“He wasn’t hungry,” Hiebert laughs as she sits outside the McCloud Mercantile taking a break from her job as a clerk in The Sugar Pine Candy Shoppe to enjoy the unseasonably warm fall weather. “He wasn’t interested in eating us.” She and her sister raised their arms above their heads to make themselves look as big as possible, and the black bear lumbered amiably by.

Rhonda Hiebert had just moved to McCloud from Fresno, California and she counts the black bear among those who welcomed her to this unique northern California town. Just a ten-minute drive east of Mt. Shasta and only 85 miles from southern Oregon, McCloud is a tiny town in the middle of a vast forest of white fir, red fir, sugar pine, Douglas fir, incense cedar, lodgepole pine, and other towering trees. It is reported to have a population of 1,343 year-round residents (according to the 2000 U.S. Census), though some locals think that’s an exaggeration.

My 7-year-old daughter and I have come to spend the weekend here in McCloud, to discover the town and learn about its history, and to finally ride the Shasta Sunset Dinner Train after years of seeing the larger-than-life billboard advertisements while driving down I-5. We start late from Ashland, drive down the winding highway through huge elevation changes, past golden yellow shrub grass and hills as big as mountains.

We pull into town after dusk on a Friday night in early fall and head for one of the only open restaurants, the River Grill and Bar. The quick clonck of pool balls hitting each other and the boisterous sound of people drinking at the bar greet us as we walk into this dimly lit, rustic place. It’s hot inside and most of the people at the bar are in their shirtsleeves.

A couple in their 60s from the Netherlands having dinner at the next table tell us they’ve stopped in McCloud on a tour of northern California because they read in their Dutch guidebook that it’s a special place. My chicken salad is served on a bed of perky iceberg lettuce with pepperoncini, onions, and a few tired tomatoes.

My daughter Athena gobbles down her chicken nuggets and minestrone soup and writes in her journal (she’s taking notes too) that the restaurant is “verry verry fancy.”

We stay past bedtime so she can sketch the fascinatingly tacky lamp on our table, which has a plastic log house for a base, complete with a model-railroad evergreen tree out front.

It’s so overheated in the restaurant that while Athena is drawing I pull off my sweater, only to realize I’m only wearing a tank top. “No worries, hun,” the waitress who wears her hair in a long blonde ponytail, says. “You’re in McCloud now! Anything goes here.”

It’s true. You might find anything in this tiny town, which strikes me as a place full of contrasts and contradictions seeking an identity. Quaint art galleries coexist alongside teenagers gunning their dragsters down the town’s unusually wide streets, built to accommodate the lumber trucks that drove right through town to and from the mill.

McCloud is a work in progress; a quiet town that has seen some fat times and some lean times and that may be on the cusp of a renaissance, but then again, may not.