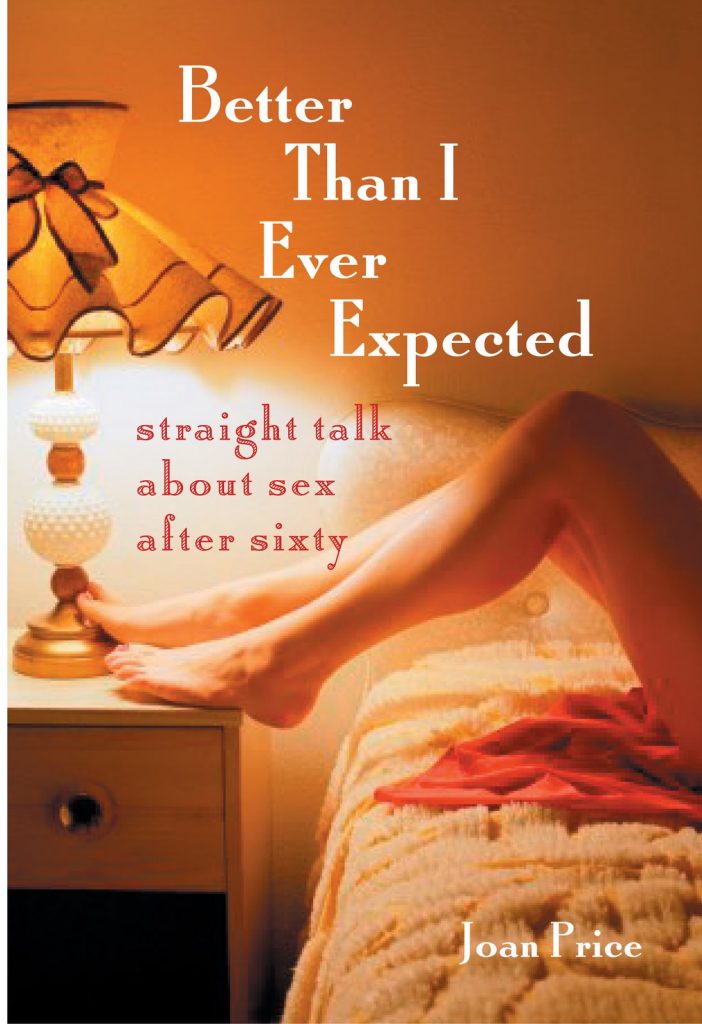 There are so many good reasons to enjoy mutually consensual sexual intimacy at any age.

If you need some inspiration, there’s Joan Price’s lusty book Better Than I Ever Expected: Straight Talk About Sex After Sixty.

She’s spokesperson for the sex life of aging Baby Boomers.

Her advocacy comes in many forms.

One is a 269-page book, published by Seal Press, called “Better Than I Ever Expected: Straight Talk About Sex After Sixty.”

The book is divided into 15 chapters—everything from “Plug In, Turn On: The Quick Version of Everything You Need to Know about Sex Toys” to “When You or Your Partner Can’t.”

The book is a celebration of sex after sixty by a woman who writes frankly about her own sexual awakening over the years and whose past history reveals that she’s a true child of the 60s.

(The way she describes it, she had several very successful open relationships, including an open marriage, as well as many times in her life with multiple lovers and friends with benefits).

“Juicy is an attitude,” Price writes in a chapter entitled, “It Ain’t Easy After Menopause,” “… based not on the flow of our vaginal secretions but on physical well-being, emotional state, mental attitude, and love of sex.

The idea for the book came out of the relationship she was having with an understanding lover, a more conservative man named Robert who took his time before getting involved with her and who, unlike Price (who’s never had children), had spent most of his life in one long committed relationship.

Price wrote the book four years into their relationship.

“I was 61 and in an amazing and intensely sexual relationship with Robert, age 68 … I was, indeed, having the best sex of my life,” Price explains.

“There’s nothing hotter than sex between people who know their own bodies, are crazy about each other, relish taking lots of time, and honor sex as extremely spiritual and physical.”

Interested in enhancing their lovemaking even further, Price sought out good books about sex over 60 to read.

She didn’t find any she liked.

“I went looking for good sex books, both fiction and nonfiction, specifically aimed at my age group. I was surprised—and turned off!—by how few of these books existed, and how dry and unsexy most of them were,” she says.

“Some were much too academic to bring into the bedroom, many were outdated, and some were supposed to be titillating but weren’t—at least to us.”

So Price decided to write the book she wanted to read.

Robert, a much more private person, supported her project but with some reservations.

Writing About Sex After Sixty

In the beginning of the book Joan Price details how Robert would interrupt her writing for an afternoon in bed.

“Isn’t this better than writing about sex?” he’d ask as they snuggled together afterwards.

The lure to the bedroom wasn’t enough to deter Price, though.

And her book—which is full of exclamation points and positive affirmations about sex after sixty—reads like it was written by a woman on a mission.

Price’s mission is to celebrate, enhance, and affirm the sex lives of women (and men) over sixty.

She’s talking about a subject that’s not addressed much in the mainstream (where “older” woman is usually equated with 40-year-olds).

“On TV and movies, with very rare exceptions, people over sixty are portrayed as either asexual or pathetic and icky if they are sexually active,” Price says.

Debunking the myths and creating a sexual space for 60-year olds (that is, writing the book) took Price about nine months.

“The whole process was the most joy I’ve ever had writing a book,” she says.

“I loved recapturing old memories and getting a new perspective on those past experiences.

“I especially loved finding the right words for describing the interactions, attitudes, sensations, and emotions connected with my relationship,” Price continues. “Often I found myself squirming as I wrote and looking forward to [our] next date.”

An Honest Look at a Taboo Topic

Although responses to her book have been varied (one reporter wrote “Now that Boomers have discovered there’s sex after sixty, could they please stop writing about it!”), Price has received a lot of positive feedback for giving an honest look at an almost taboo topic.

“Most of the responses have been overwhelmingly positive and downright grateful that this topic is finally out in the open,” says Price.

Of course, sex after sixty isn’t always easy, as Price is the first to admit.

In “Better Than I Ever Expected” Price includes a chapter about when one partner or the other is not able to be sexually intimate.

She also talks honestly about the changes wrought on women by menopause and on men by aging, gravity, and prostate dysfunction. 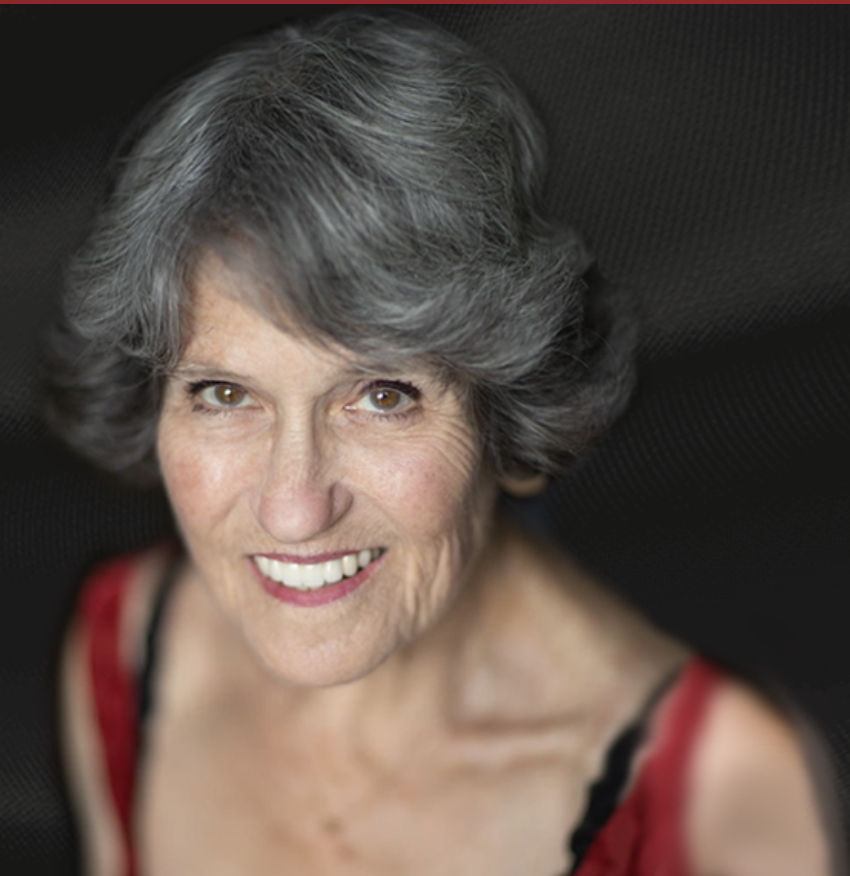 “The hormonal changes of menopause cause all kinds of comfort/libido/pleasure changes, such as decreased natural lubrication and thinning vaginal tissues, which can make intercourse less comfortable,” Price admits.

“It can take much longer to get aroused and much longer still to reach orgasm,” she continues. “Yes, all of this affected me.”

In the book Price writes about the first time she had sex post menopause (after a lull of several years in her previously active sex life) and how she had some bleeding in her vagina from tears.

“Our bodies are slower to respond, and we may have more trouble reaching orgasm.”

Price’s Solutions to Your Body’s Changes for Great Sex After Sixty. Make Liberal Use of:

“Sexual response is in our brains more than our genitals,” Price insists. “My lover and I are as turned on by each other as a couple of teenagers, but with the juicy addition of decades of life experience, self-knowledge, communication skills, and a sense of humor.”

She says sex over 60 has made her both adventurous and accepting.

“We’re willing to experiment and stretch our boundaries. Men will be relieved to learn how accepting most women are about men’s changes and how to have great sex even when some parts aren’t cooperating.”

Throughout the book Price includes quotes from women who took her survey—women in their 60s who are having great sex.

It’s a pre-selected group, which Price herself points out.

When she sent out a call for interviewees she stated she was looking for “sassy, sexy women, age 60+ to share feelings and experiences openly and anonymously” so any women who didn’t fit that description would not have responded.

Still, while it’s interesting to learn so many of the intimate secrets of these women (who are all identified by a faux first name only), one can’t help wondering if some of them—and Price herself—are protesting too much.

Price, who has a history of failed relationships, was still in the honeymoon stage of her relationship when she began writing “Better Than I Ever Expected.”

She’s right, of course, that “juicy is an attitude,” but with the relentless desexualization of older people (especially women), combined with the lack of respect shown to the aging, it’s hard not to wonder if as many people have the attitude (and if Price is really as juicy) as the book seems to suggest.

If you’re looking for great sex over 60 but not yet having it, this book might make you feel rather alienated and depressed (wow, all those folks out there getting their groove on, where’s mine?).

After all, it’s never too late to find your libido and start having sex over sixty.

Joan Price’s Tips for Getting Back in the Dating Game After the Death of a Spouse:

« Go Ahead, Touch My Belly! 3 Reasons Why Pregnant Women Should Stop Complaining About Belly Touchers
43 Things I Know Now That I Am 43 »