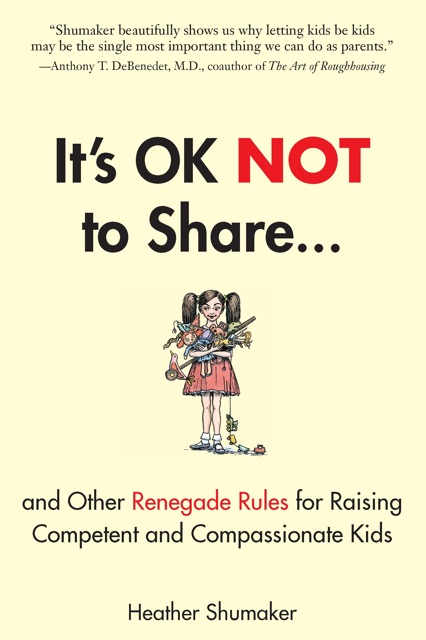 When my son was in preschool his teacher took me aside. He had mentioned to a friend that he had a toy gun. The teacher disapproved, aghast that any forward-thinking parent would allow a child to play with a toy weapon. But a new book by Heather Shumaker, a writer and mom of two who is guesting on this blog today, actually shows that it’s okay for kids to play with guns and swords. Guess what? Social science research confirms what many a seasoned parent already knows: that playing with a toy gun won’t make your child into an axe murderer! And if your three-year-old refuses to share his toys, he’s not going to become a stingy adult! (Think about it, would you really let someone you just met drive your car?).

Heather’s new book, It’s OK Not to Share, which I can’t wait to read, turns conventional parenting advice on its head, arguing that it’s okay for kids to roughhouse, not to say sorry, and engage in all sorts of other behaviors usually thought of as “bad.” Read on to hear about how Heather turned her idea for the book into reality and how to win a copy!

I first met Jennifer at an ASJA conference in New York in 2010 when I drew her name as my mentor. We were both far from home, both with little kids left in someone else’s care.

“You’ve got a great idea for a book here,” she said. “But…” she picked up her pen and started striking out sentences. “This query letter definitely needs some work.”

Well, I worked on it. By the next time ASJA rolled around, I had an agent who was passionate about my book. At the time, it was called Boxing at Preschool, but now that it’s being published, the book’s title is It’s OK Not to Share … And Other Renegade Rules for Raising Competent and Compassionate Kids (Tarcher/ Penguin 2012).

I wrote the book while raising two young kids, working part-time about 20 hours a week. The path from book idea to book was slow (I did my first interview when my oldest child was an infant; he’s now 7), but the book writing itself was incredibly fast. The contract gave me 8 months to turn in a manuscript, but part way along, my editor called and asked if I could finish it 2 months early. So now I know it’s possible to write a book in 6 months.

I’ve been helped by many ASJA authors and other writers along the way. Some I met just briefly – in the airport coming home, chatting on a coffee break – but still those ties linger over the years and they all saw potential in the book. One introduced me to her agent, another wrote a blurb for the book’s cover. The camaraderie of writers helping writers has been marvelous.

So here’s what everyone has helped me to produce: an unorthodox parenting book that flips most old standards upside down. It may be the only parenting book that advises parents to let their kids swear, hog their toys and hit other kids (advice all based in good science and child development, of course). The table of contents looks like this: 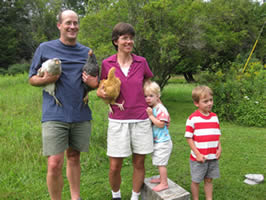 Heather Shumaker, who says it’s OK not to share, makes her home in northern Michigan, with her husband, three chickens and two children. Photo courtesy of Heather Shumaker.

Kids don’t have to say ‘sorry’

‘I hate you’ is nothing personal

Despite what you might think reading these chapter titles, the book is all about human rights and respect. For kids have rights adults often ignore – simple things, like the right to move their bodies (“stop that and sit down!”) the right to choose their own play ideas (“that’s not a gun, that’s a magic wand”) and the right to keep using a toy they are busy playing with (“be nice and share!”).

The book’s message seems to be hitting a nerve in our culture, a culture that currently allows toys to grow dusty in kindergarten classrooms and gives kids homework as young as three. In America today there seems to be a general distrust of childhood, including a child’s right to have time to play, to be outdoors, to choose their own playmates and play ideas.

In the rush to academics we’re skipping over the two main jobs of preschoolers: learning how to resolve conflicts and coping with their intense emotions appropriately. Mastering these complex skills are what being a civilized human is all about. It takes practice. And free, unstructured play gives the best opportunities for practice.

I’m glad a mother like Jennifer was one of the first people to see potential in It’s OK Not to Share, and despite its title, I’m glad to share it with you. ~Heather Shumaker

« 7 Tips to Make Family Travel (With or Without Children) Easier
Lessons From the Colorado Killings: How Do You Keep Your Wits About You in an Emergency? »