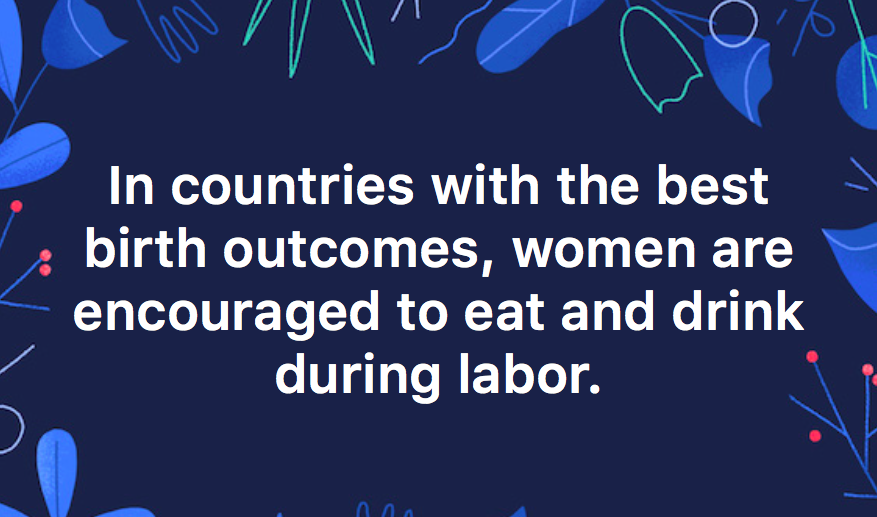 Were you told it was too dangerous to eat or drink during labor? If so, your doctor was spouting outdated nonsense. Doctors tell pregnant women eating and drinking during labor is “not allowed.” But this advice is simply wrong.

Would you run a marathon without water or food?

Would you climb a mountain?

Would you have a baby?

Yet many hospitals in America continue to restrict what a laboring woman can eat or drink, telling women that eating and drinking during labor is forbidden.

“It’s against hospital policy,” a laboring woman is told.

The idea that eating and drinking during labor is dangerous is a holdover from the late 1940s when Dr. Curtis Mendelson, a New York obstetrician, posited that food could be vomited and then aspirated into the lungs if a patient was under general anesthesia.

Today the relevance of Mendelson’s findings, mostly done on experiments with rabbits, is disputed.

And the fact is that the vast majority of pregnant women, even those who end up delivering via Cesarean section, will not be under general anesthesia.

A systematic review of the scientific literature, published by the Cochrane Institute in 2009, found no benefit to restricting eating and drinking during labor.

Cochrane, a nonprofit independent network of researchers, professionals, caregivers, and patients, gathers and summarizes the best existing scientific evidence to help patients make informed, educated choices. Their reviews are often considered the gold standard of what we know and what we don’t about best practices in medicine.

ACOG has it wrong

But despite the Cochrane findings that there is no benefit to restricting eating and drinking during labor, the American College of Obstetricians and Gynecologists (ACOG), continues to recommend restricting food.

“Allowing laboring women more than a plastic cup of ice is going to be welcome news for many,” William H. Barth, Jr, MD, of Massachusetts General Hospital in Boston and chair of ACOG’s Committee on Obstetric Practice, is reported as saying in a press release about ACOG’s updated guidelines. “As for the continued restriction on food, the reality is that eating is the last thing most women are going to want to do since nausea and vomiting during labor is quite common.”

Eating is the last thing a pregnant woman is going to want to do?

Ah, Dr. Barth, one sees that you have never been in labor or given birth to a baby.

But they also feel hungry.

I was hungry during my labors. Especially when a labor lasts a long time, women need to eat and drink.

A woman’s body knows what it needs. The laboring women should be the judge of whether eating and drinking during labor is right for her. Not an ACOG guideline.

Having a baby in Norway

If you have a baby in a hospital in Norway, the doctors won’t restrict your food intake.

At the Ullevål Delivery Department at the Oslo University Hospital in Norway, which I visited twice this September, the obstetricians or the midwives (midwives oversee 70 percent of the births in Norway) may even send you downstairs to the cafeteria to get something nourishing to eat.

If you don’t have the energy to walk that far, they have snacks on hand.

In a window-lined room for laboring women and their families in the ABC (Alternative Birth Center) at Ullevål, which has a kitchen, table and chairs, toaster, and microwave, there’s a nice big refrigerator.

Tubs of liver paste, tubes of caviar, butter, fruit juice, and frozen whole grain bread are available to anyone — the laboring woman, the eager spouse, or the hungry journalist. 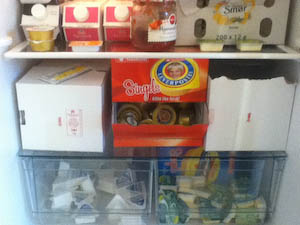 Food for laboring women is not discouraged at the hospital in Norway, it is actually provided 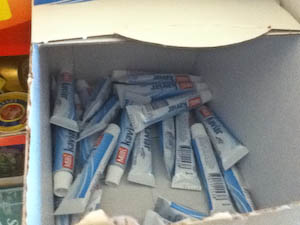 Caviar is a popular food in Norway, available for free on the labor ward to anyone’s who’s hungry

It strikes me as ironic that in countries that have the best birth practices (and the best maternal and fetal outcomes), their evidence-based practices often come from studies done partially or entirely in the United States.

In Iceland a baby is not washed after birth, because science has shown that this does more harm than good and that the fluids on a baby’s body are actually good for her skin.

Continuous fetal monitoring is not used during low-risk pregnancies, because studies have shown that this kind of monitoring only leads to more unnecessary C-section and other intervention, not to better outcomes.

And laboring women are allowed to eat and drink what they want when they want it. Eating and drinking during labor is the woman’s choice.

Maybe it’s naive. Or maybe it’s clairvoyant. But I like to imagine that one day our birth system will be more like Scandinavia’s.

I look forward to the day when American doctors will start paying attention to the science and best evidence.

So a woman can be empowered to have her best birth, treated with dignity, and given as much or as little as she wants to drink.

It’s hard work to give birth to a baby. Laboring moms deserve to be treated with kindness and respect.

If the hospital where you want to give birth does not “allow” you to eat and drink during labor, find a different hospital.

Or, better yet, have your baby at home.

« It’s GOOD That Your Kids Are Bad. Or Is It?
Living With a Toddler is Like Living With Someone With a Multiple Personality Disorder »