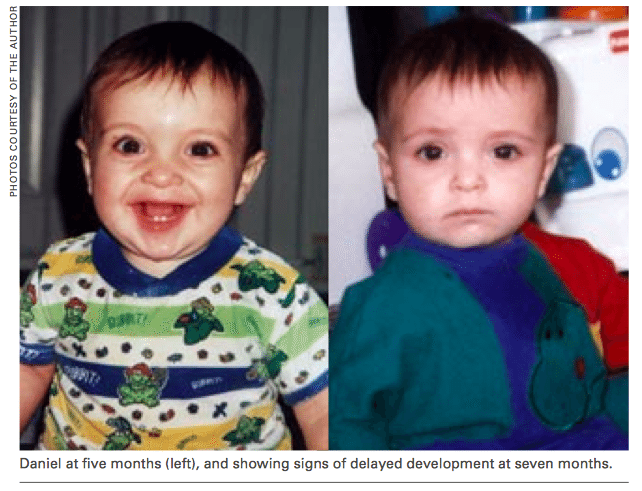 When Mary Romaniec’s son Daniel was seven months old he was developmentally delayed: Daniel could not lift his head. He did not roll over.

The doctor recommended a pediatric physical therapist who started coming to their home.

The physical therapist worked wonders with Daniel, who started catching up and hitting milestones. 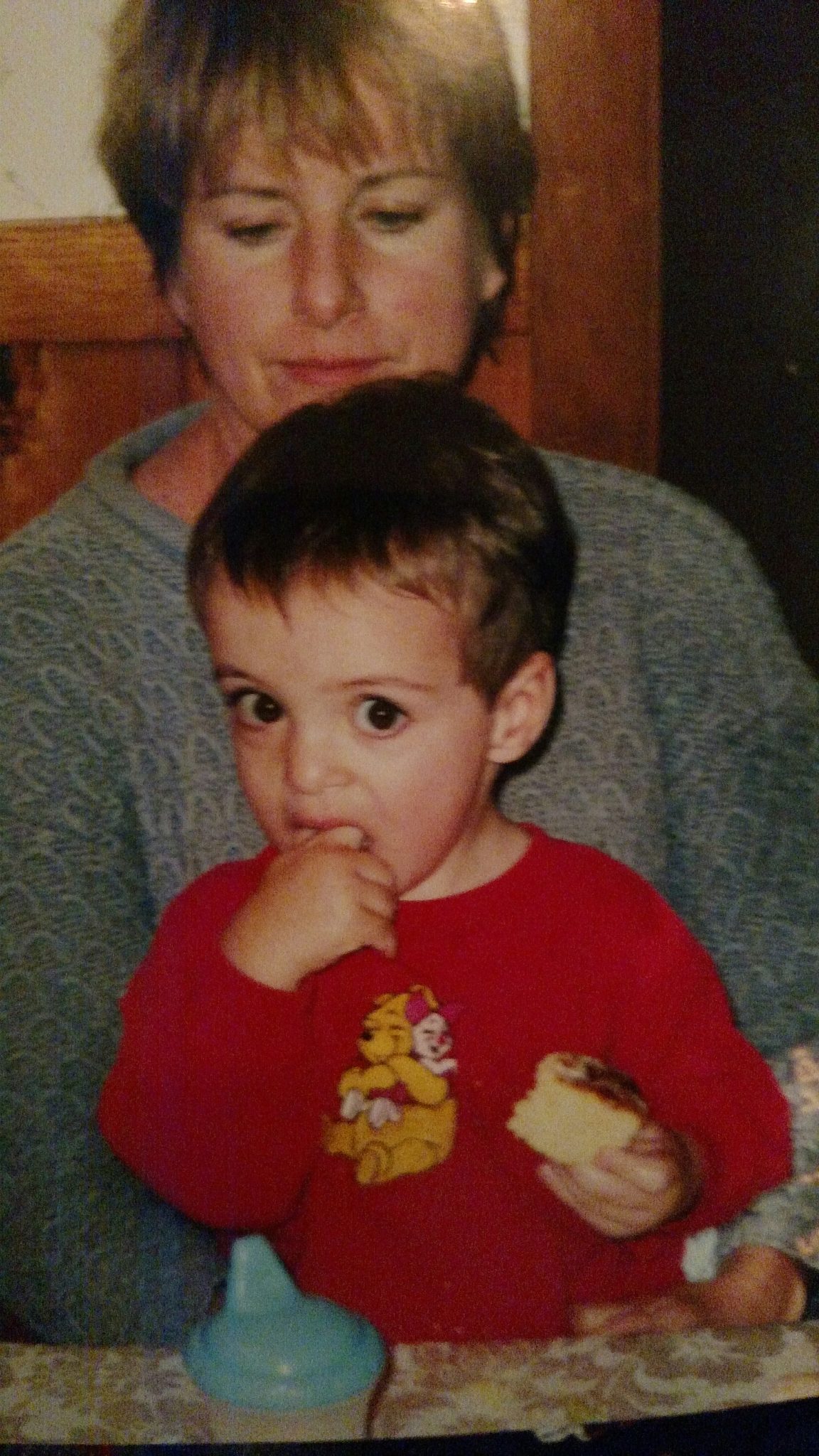 By the time he was 18 months old, Daniel was in so much pain he would scream when he awoke from naps

Then, when he was 12 months old, his health took a nosedive.

As Mary Romaniec, a journalist who lives in Grafton, Massachusetts, describes in a 2004 article in Mothering magazine, Daniel had all the recommended vaccines at his one-year visit, including the combined vaccine against measles, mumps, and rubella (MMR).

After the doctor’s visit, he got very sick.

He had such terrible green stinky diarrhea that Romaniec called the doctor.

When Daniel spiked a fever of 105, she called the doctor again.

And then he started regressing.

He lost the desire to walk.

He was no longer able to play peek-a-boo.

He no longer understood when his mother spoke to him.

As Romaniec describes in her new book, Victory Over Autism, Daniel was in visible pain as a toddler.

He screamed when he woke from napping.

He banged his head against the floor.

He was sick and miserable, as was the whole family.

Doctors, who are now handing out autism diagnoses to more than 1 in every 45 American children, often advise parents to get their finances in order and start investigating group homes for when their child with autism gets to be too much to handle or ages out of publicly funded aid.

But Mary Romaniec did not listen to the doctors’ dire predictions about her son’s condition.

Her reaction wasn’t “this is hopeless, my son’s life is over.”

Her reaction was “let’s fix this.” Let’s try everything we can to help Daniel recover from autism.

Mary wasn’t interested in hearing why nothing would work, why autism was irreversible, or why any given doctor’s suggested treatment was quackery.

She was interested in treating the illnesses that had started just after Daniel’s 12-month vaccines, healing her sick son, and trying everything—no matter how experimental or outside the mainstream—she could to help Daniel get well.

Thanks to a Herculean effort that included multiple interventions, Daniel’s tummy stopped hurting. He started regaining his speech. And he was able to start kindergarten at the same time as his peers with little more than extra speech therapy. 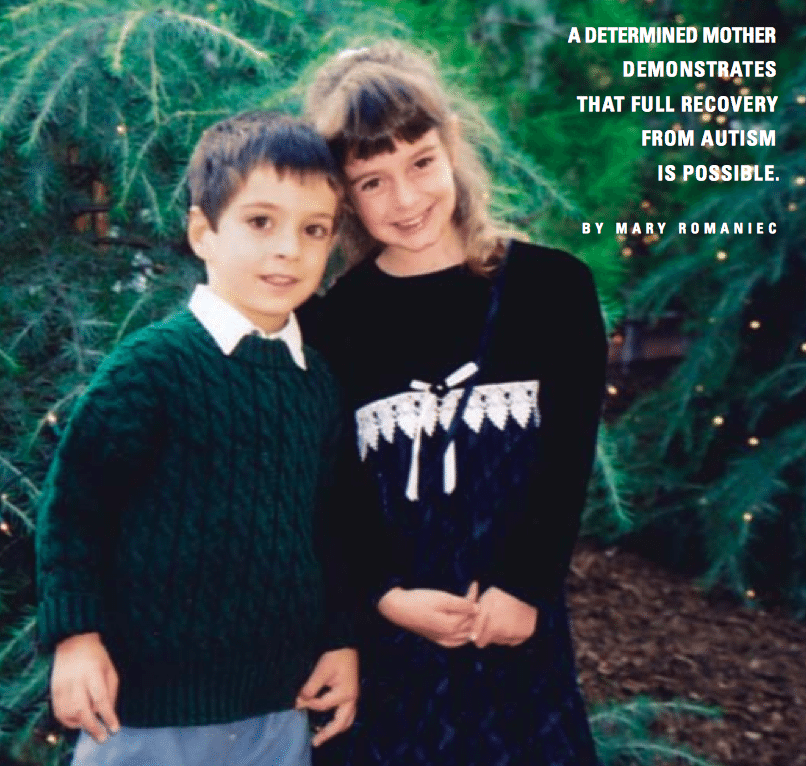 Something we are told is “impossible.”

I have a friend whose son was diagnosed with autism by five different doctors, including two specialists. She took him to that many different doctors because she was desperately trying to find one to tell her there was nothing wrong with him! But the doctors insisted he had autism. Like Mary Romaniec, my friend started researching. She also stopped sleeping. She connected with other moms, sought out alternative health care practitioners, and did everything she could—everything—at the same time carefully documenting how her son responded to each treatment.

She made massive changes to the way she fed her family.

She took sugar, gluten, and all packaged foods out of their diet.

At one point she had a hyperbaric oxygen chamber in her home.

Before autism this friend was the opposite of a crunchy mama. She wasn’t the tiniest bit alternative or weird.

Before autism she was so glad to be part of the mainstream medical establishment that she did everything the doctors ordered—including every vaccine—and asked for more.

My friend’s son, too, conquered autism. He’s now in an elite private school getting good grades.

Did the doctors who diagnosed him with autism ask my friends what interventions she tried and which ones worked?

Have they suggested doing a case study of her son?

Every mainstream doctor she talks to now dismisses the fact that her son has been able to recover from autism as “impossible,” telling her that “he must not have had autism in the first place” and that their colleagues, all five of them, must have been wrong!

Romaniec and hundreds of thousands of other parents have had to deal with doctors, nurses, educators, and family members who believe that once a child is diagnosed with autism the label never goes away.

At the same time, the number of children overcoming autism is increasing; parents are fighting harder for their children’s health and becoming more aware that recovery from autism is possible.

Do you see the CDC sending out experts to do case studies of children who recover from autism? Or contacting the medical doctors (like this one, this one, this one, and this one) who are using alternative health protocols and reporting much less autism and much better outcomes among their patients?

Do you see conventional doctors looking critically at their own practices–recommending a bloated and dangerous vaccine schedule, overprescribing antibiotics, promoting infant formula and hawking pharmaceuticals to new moms–to find out how they themselves are harming our children’s brains?

Mainstream doctors would rather throw five colleagues under the train than stop and think.

They would rather tell parents that sudden onset autism with co-existing health conditions like devastating diarrhea or constipation is genetic (a lie which no one is stupid enough to believe anymore. Keep repeating it, doctors. Shout it from the rooftops, CDC. You can say it over and over again. But that won’t make it true.)

They would rather tell you that all vaccines for all children are safe and effective than examine their own harmful practices.

They refuse to open their minds enough to pay attention to what we know about how to stop autism from happening in the first place.

And they seem to care more about their own egos, as they blindly adhere to their medical profession, than they do about helping children diagnosed with brain and immunological dysfunction.

Victory Over Autism is a road map.

It’s a practical guide for parents of children diagnosed with autism.

It teaches you how to fight.

It teaches you how your child can recover from autism.

You find your tribe.

And, as Romaniec tells the reader both with practical advice and dozens of real life examples, you never take “no” or “it won’t work” or “it can’t happen” or “the school doesn’t have the funding” for an answer.

And she wants you to be too. 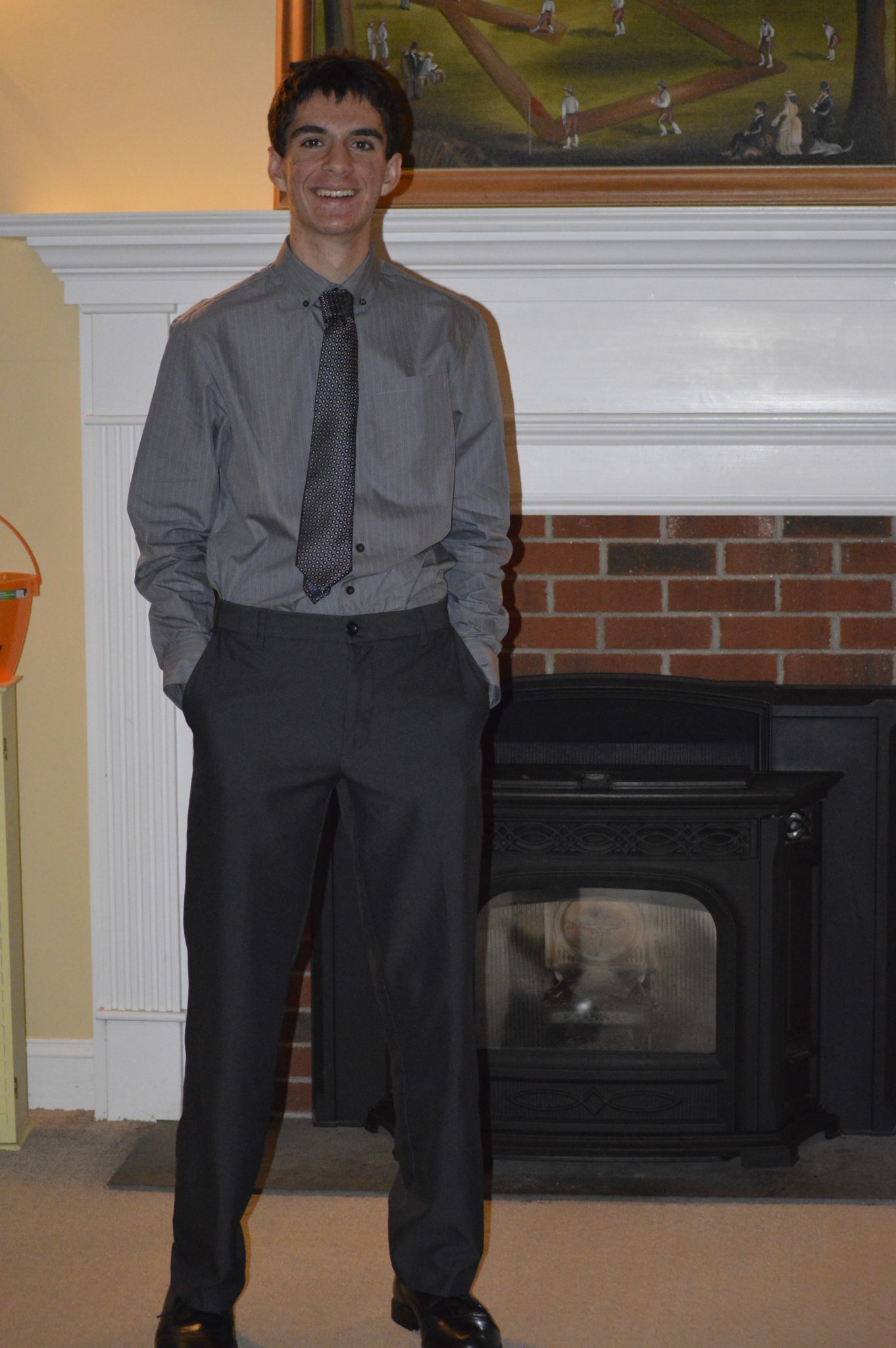 One of my favorite things about this book is Romaniec’s suggestion that women have more sex with their husbands. As a way to reconnect. As a way to communicate. As a way to open channels of better understanding. As mad as you might be because he’s not doing as much as you are as you both fight for your child, Romaniec recommends getting horizontal together, giving him a night he will always remember, and then talking to him the next morning about how he can do more. 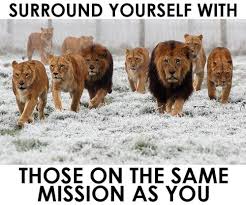 This book is a must-read for any parent with a child on the autism spectrum.

Not every child with autism will respond to treatments.

Many parents feel they don’t have the time, the money, or the privilege to try expensive interventions that may or may not make a difference.

My nephew is a schoolteacher in the inner city. There’s an African-American child in his class with severe autism. This child’s working class single parent family cannot afford to buy whole foods or eat organic, let alone find the time to take the gluten and the casein out of their child’s diet. The school knows that the family does not have the wherewithal to ask for an aide in the classroom or make sure the school is doing their part to get the child special help. The mom is being told by the doctors that their child’s health condition has “nothing to do with vaccines.” And she, sadly, still trusts the doctors, and still trusts the system that is failing her family so badly.

There are different kinds of autism.

I respect the neurodiversity movement and understand that some forms of autism are cause for celebration.

But the toxin-induced autism—whether it’s being caused by acetaminophen (the main ingredient in Tylenol) given at the time of vaccines, the ingredients in the vaccines themselves, other toxic environmental exposures, or over-exposure to ultrasounds—that manifests as severe brain and immune damage is devastating and must be stopped.

That our medical community is silently watching this happen, discouraging parents with the lie that “autism isn’t curable,” and doing nothing to prevent it from happening in the first place is nothing short of criminal. 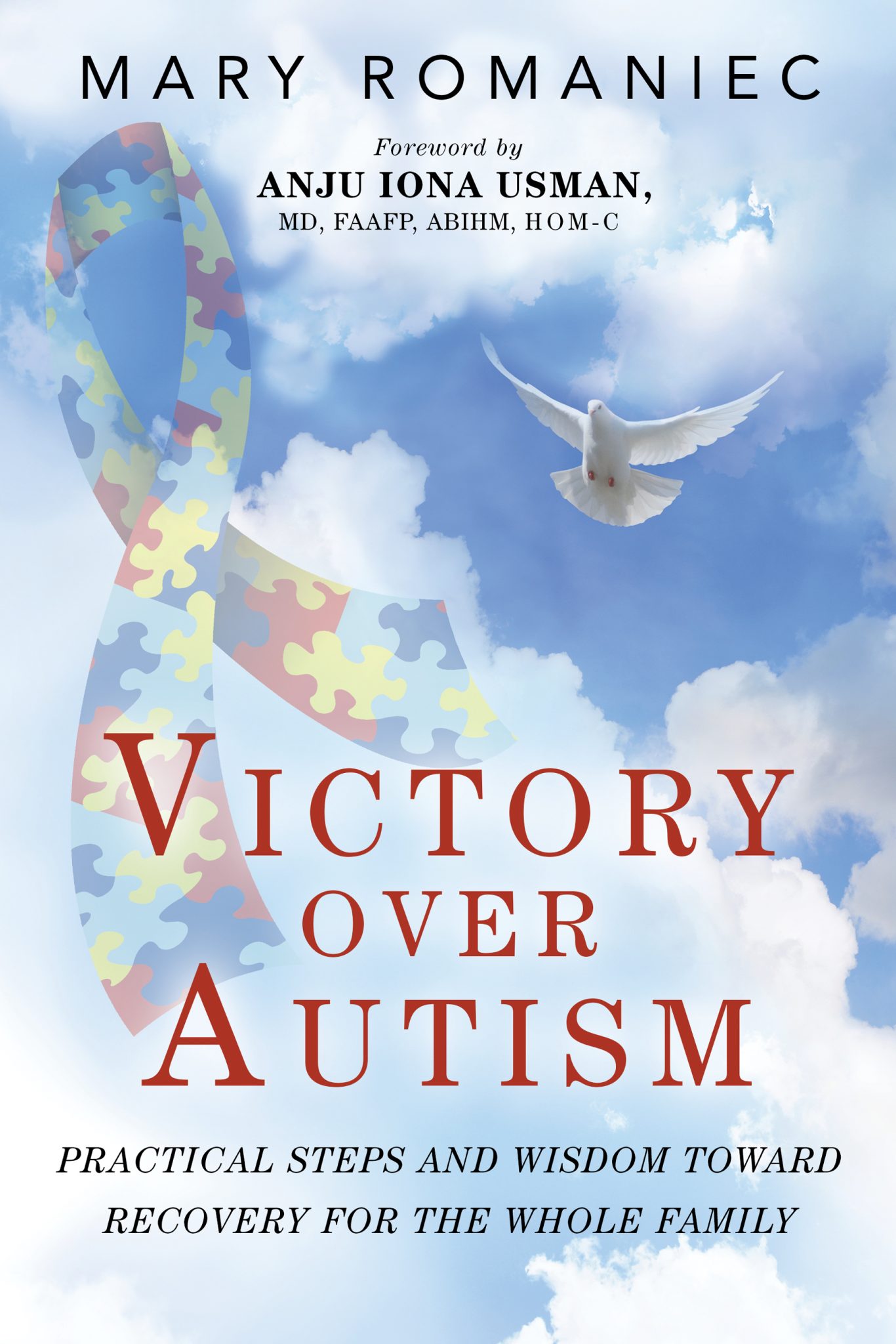 And while you’re at it, read A Real Boy: A True Story of Autism, Early Intervention, and Recovery, by Christina Adams, a writer and parent advocate who also recovered her son.

And An Unfortunate Coincidence, another memoir about a child–a girl this time–who recovered from autism.

And then buy a copy of each book for every doctor you know.

Children can recover from autism. We can STOP autism before it starts by STOPPING the medical practices that are causing it.

The truth is out there. It’s time for doctors, the CDC, and every parent in America to face it. 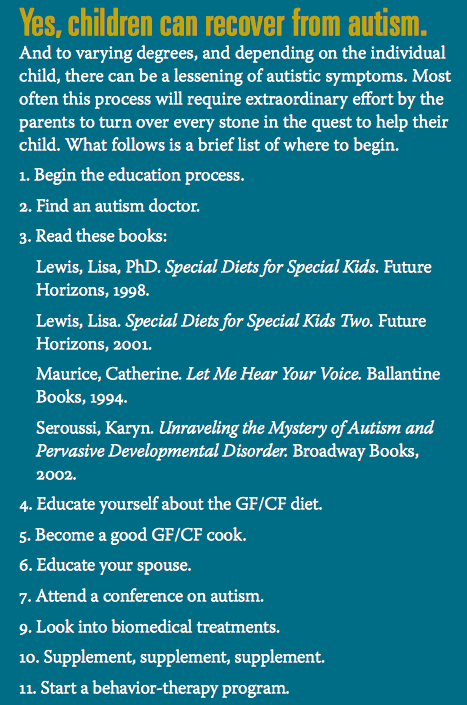 From Mothering magazine: Yes, children CAN recover from autism

« Can You Help Someone Who Doesn’t Want Your Help?
What Happens to One Woman Matters for all Women »