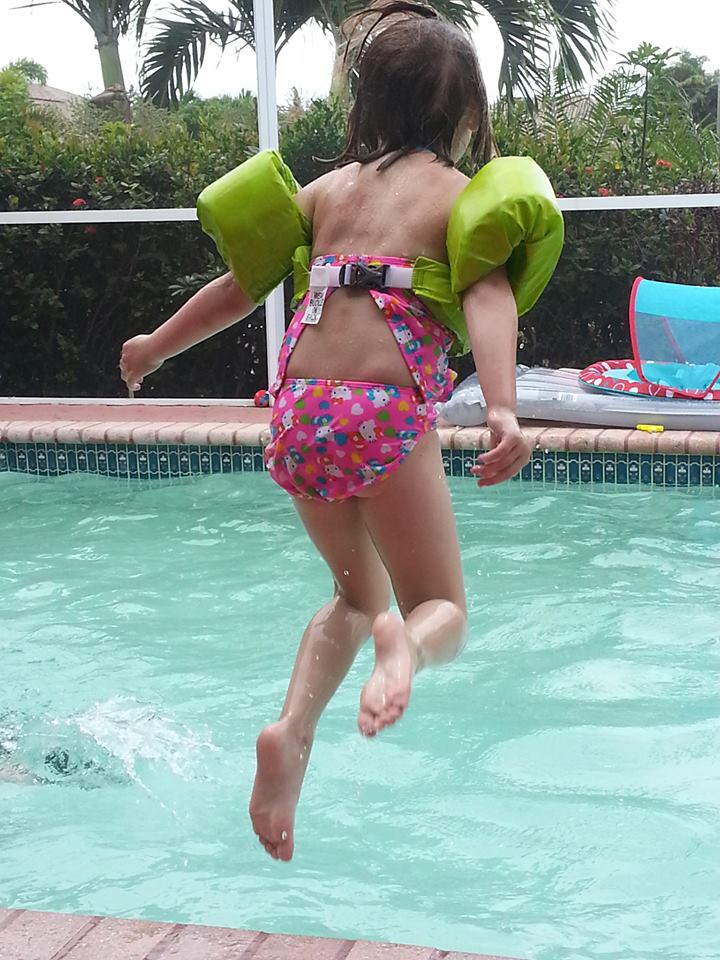 Secondary drowning is something every parent needs to know about. Photo courtesy of Jenna Catherine Deuel

My husband was excited about renting a house with a pool. I was terrified with fears of finding a child drowned.

Even though we were spending the year with three small children in a country where it can get as hot as 130 degrees in the shade, I did not want to have a pool.

Thirteen years before, when I had lived in Niger for the first time, I had a colleague at the American Embassy whose son drowned.

He was a toddler.

His nanny was napping when he fell into the water. When the nanny woke up she found my colleague’s little blond haired boy face down in the pool. He was dead.

But my husband and I had spent over a month looking for a house to rent, and we were desperate to get settled. All five of us were sleeping in one bedroom at a missionary guest house.

Besides, my husband liked the idea of having a pool. So we signed a lease and hired workers to fix the rusty 7-foot metal railing even before we moved in.

We made sure the pool was always locked. We talked to our kids about water safety.

My son was inside the railing one day watching Pierre clean the pool while I was at work at the university and my husband was in the home office. My son dropped a change purse into the water. Pierre had gone to adjust the filter system. My son had reached out with a stick to try to retrieve the fallen purse.

He reached too far.

He fell into the water.

He was three years old.

He didn’t know how to swim.

If Pierre had not heard the splash my son could have drowned.

That was seven years ago. I’ve written about the incident before. These days my son is a pretty strong swimmer and I don’t worry as much about drowning. But I found myself thinking about my son’s near drowning today as I read about another way that kids can also drown that I have never heard of before: secondary drowning.

As we all gear up for summer and the weather gets warmer, child safety advocates are warning parents about secondary drowning.

Secondary drowning “occurs when a small amount of inhaled fluid acts as an irritant, causing inflammation and leakage of liquid into the lung,” Michael Roizen, MD, chief wellness officer at the Cleveland Clinic, is quoted as saying in this story in youbeauty.com. “In some cases, the body may respond by pushing even more liquid into the lungs (this is called pulmonary edema) over the following hours, reducing the ability to breathe and leading a person to drown in their own body fluids.”

That’s what happened to Cassandra Jackson’s 10-year-old son Johnny, according to according to the Redwoods Group. He was splashing around in the water and having a good time. Though Johnny swallowed some water and then started coughing, his mom did not notice anything out of the ordinary.

He died that night. The cause of death was reported as asphyxiation due to drowning.

Some of the post-swimming symptoms of secondary drowning include sluggishness, slurred speech and coughing leading to nearly unresponsive lethargy. Doctors stress this can be an emergency situation and that if your child shows any of these symptoms, he requires immediate care.

The reaction can take place up to 72 hours after a near drowning incident.

Though the Centers for Disease Control does not keep statistics on secondary drowning, the CDC reports that from 2005-2009, there were 3,533 fatal unintentional drownings (non-boating related) every year in the United States.

Children ages 1 to 4 have the highest rates of drowning:

“In 2009, among children 1 to 4 years old who died from an unintentional injury, more than 30% died from drowning. Among children ages 1 to 4, most drownings occur in home swimming pools. Drowning is responsible for more deaths among children 1-4 than any other cause except congenital anomalies (birth defects).”

Fatal drowning remains the second-leading cause of accidental death behind motor vehicle crashes for children ages 1-14.

See why I was worried about having a pool?

Last week another mom’s toddler almost died from secondary drowning. As Delighted Momma details in this blog post, her son spent maybe 20 seconds submerged in the water, cried, and coughed but seemed totally fine afterwards. Then things took a turn for the worse:

This time was different. [The pediatrician] was stern and said I needed to take Ronin to the ER NOW because he could be experiencing scary after effects of his near drowning incident (secondary drowning).  You can read more about what that is here and here. I hung up and we all rushed to the ER.  The nurses immediately brought us back.  Within moments the Dr was in.  He got my story again and in a scolding tone asked me why I didn’t bring him in sooner.  I told him that right after it happened he seemed totally fine.  I told him he was breathing normal and gave no signs that he was in distress.  He did not like my answer and knowing what I do know now, I don’t blame him.  They took Ronin’s temp and it was 101.  So weird since he was definitely not sick that day.

The doctor ordered an immediate chest x-ray along with a whole list of blood tests.  At this point in the evening Ronin was acting limp and almost unresponsive.  Once the results were in the doctor came in with the update.  His facial expression did not look like it was going to give good news.  He said Ronin’s blood work came back normal (that’s good I thought!) but….the chest x-rays were not good.  He said his lungs aspirated.

Consequences of this range from no injury at all, to chemical pnuemonitis (from the chemicals in the spa), to death within minutes from asphyxiation.  He said at this point it was very serious and he needed to be ambulanced immediately down to Children’s Hospital in San Diego to see a Pediatric Specialist.  He said all the arrangements were already made and the doctors and team of nurses were waiting for him.  My heart crushed into a million little pieces at that moment.  I felt like it was literally getting ripped out of my chest.  This was my fault no matter how many times people were telling me it was an accident and it could have happened to anyone.

On the ambulance ride down to Children’s Hospital Ronin’s oxygen levels started dropping.  I watched as the little screen in front of him went from 98% to 92% to 89% to 74%.  The team on board scrambled to attach an oxygen mask over his little face.  I panicked!  They tried to keep me calm and told me he was okay but I have never felt so helpless in my life.  When we arrived at Children’s hospital a pediatric specialist along with 4 nurses were waiting for us.  They brought us to our room where there was a x-ray technician waiting.  They did another chest x-ray and more blood work.  They told me at “this point” we just had to monitor Ronin and wait.  Wait for what?! They hooked him up to all kinds of machines and we waited…all night long while Ian and I watched him sleep.  On Sunday the sweetest doctor came in and talked to us.  She told me that this freak accident caused by the aftermath of a near drowning incident happens more than I might think.  She said we did the right thing of bringing Ronin in and that many times it goes terribly wrong (such as parents putting their kids down to sleep and then they never wake up again) because parents think that there kids are fine if they start breathing normally again after a near drowning event.  She also told us that there were 2 other little boys on the same floor as Ronin who were also there for the same exact thing!

She said she was very pleased because the latest x-ray had shown that the water trapped in his lungs was beginning to clear significantly.  The not so good news was that he had chemical pneumonitis due to the chemicals from the spa getting trapped in his lungs.  His lungs were irritated and inflamed but she told us that things were looking better despite the diagnosis.  At this point she said the staff will monitor him a little longer making sure a fever or other lung complications do not arise.

Ronin woke up around 10am on Sunday.  What I mean is for the first time since the incident he woke up beyond pissed off that he had all these little tubes on him, an IV in his arm and a heart beat monitor wrapped tightly around his big toe.  I have never in my life been more happy to see such a grouchy little man!  He was back and acting like his normal Ronin self.  The nurses came in because they heard him making such a commotion.  This was a great sign.

Later that day we got the news that Ronin was officially in the clear and was able to get discharged and go home. Praise God.

I am forever changed since this happened.  I will not let this define me but you can guarantee that I will be doing things much differently from here on out.  It was a huge wakeup call.  And it really taught me that yes…in just a few seconds your life can change forever.  I got a too close taste of what that really can be like.

Before Saturday I had never heard of secondary drowning.  If I had heard of it before I would have done things differently.  I would have brought him in the moment I noticed a change in his behavior even if it was just me being over paranoid or thinking he was just exhausted from the days activities.

To prevent this potential emergency, the Redwoods Group suggests basic awareness and attention.  If something happens to your child in the water leading him to struggle or be submerged, pay attention to the symptoms and seek immediate care if any problems arise.

Here is a screen shot of the CDC’s tips for being safe in the water: 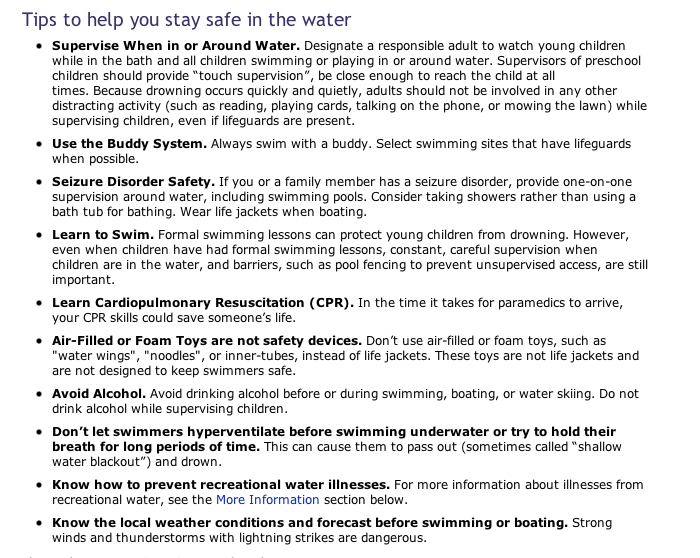 There’s nothing more refreshing on a hot afternoon than a dunk at the Reservoir in Lithia Park or some playtime in our community pool.

Summer and swimming are awesome.

As long as we all stay safe. 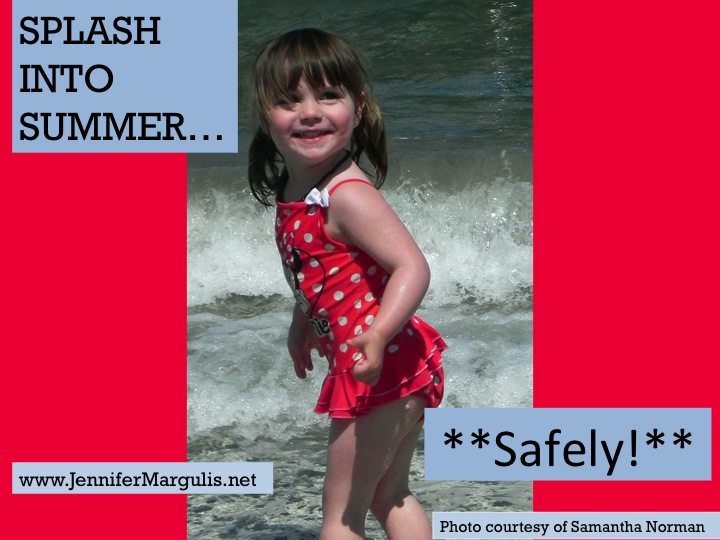 « This Mom’s Littlest Grew Up, and She Had No Idea What to Do Next
At an Author Reading Last Night Only Six People Showed Up (9 Tips On How to Get a Good Turn-Out at an Author Event) »