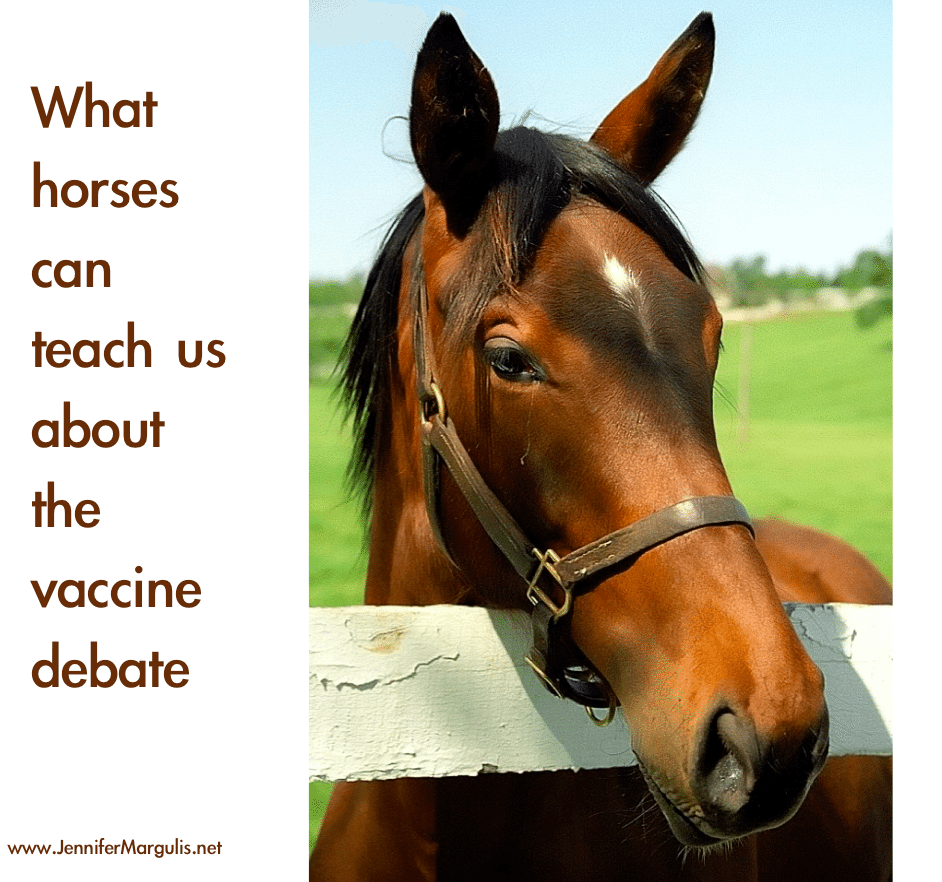 What horses can teach us about the measles vaccine debate. Vets understand we are over-vaccinating animals, medical doctors should too.

I don’t know if the measles mania is a smoke screen to hide a lawsuit against Merck, as this post suggests, a profound misunderstanding about parents with vaccine-injured children, as this post insists, or just our society’s untiring delight at vilifying parents and creating a polar measles vaccine debate where none exists.

In any case, today’s thoughts about the measles vaccine debate come from Lynn Barton. Lynn Barton lives in Southern Oregon and she and I have met in person, talked on the phone several times, and been connected on Facebook for several years now. A homeschooling mom of two, Lynn has a daughter who is 17 and a son who is 20.

Though Lynn and I don’t agree on some things, I always appreciate hearing Lynn’s opinions on current issues. She is thoughtful, well read, and smart. She was also the only mom I could find, after talking to dozens, who was willing to share her opinions on Anderson Cooper 360 (I’ve been drafting my response to the hack job they did to the topic but it’s not ready yet. Stay tuned.) last week.

Christians and Conservatives, What Happened to You? A Christian Weighs In On the Measles Vaccine Debate
by Lynn Barton

Have they asked anyone of these so-called anti-vaxxers why they believe what they do?

Have they looked into the complexity of the issue?

Do they know that most people are not anti-vaccine on principle but have issues with certain vaccines, with America’s current CDC schedule, and the fact that every new vaccine recommended by the CDC is then immediately made mandatory by the states?

Do they know that the U.S. requires more vaccines than any other industrialized country, and that we also have more children who are chronically ill?

Have they looked at the evidence presented by those who are concerned?

Do they know that for years authorities denied that the whole-cell Diphtheria Pertussis Tetanus (DPT) was harming children, before they finally changed it to make it safer? Why did they make it safer? It was perfectly safe all along, they said.

Do they know that the CDC has continued to deny Thimerosal was a problem and the FDA never recalled consumer products containing Thimerosal even though vaccine manufacturers voluntarily stopped using it? Thimerosal has been taken out of most childhood vaccines. Why? That baffling question is impossible to answer because the CDC continues to maintain that this mercury-derived preservative was perfectly safe.

Can the Christian and so-called conservative leaders who are so intent on criticizing parents for delaying or forgoing some vaccines please explain to me why we are told to vaccinate American newborns for hepatitis B, a sexually transmitted disease for which any immunity would have worn off before this child would ever be at risk?

Do they know that there is now a whistleblower from inside the CDC itself who has publicly admitted that CDC scientists manipulated data to make it look like the MMR vaccine was safer than it is, a lawsuit against Merck on the part of two senior Merck scientists, and other repeated evidence of suppression of data that indicates cover up and fraud at both the CDC and at Merck on the safety of the MMR vaccine?

Have these leaders ever considered the fact that some vaccines are made with tissue cultured from aborted babies? Do they have any moral issues with that?

Did it ever occur to them that it is possible to believe vaccines save lives but that the current schedule has too many and too early in life? (49 doses for 14 diseases by age 6, plus a flu vaccine every year.) 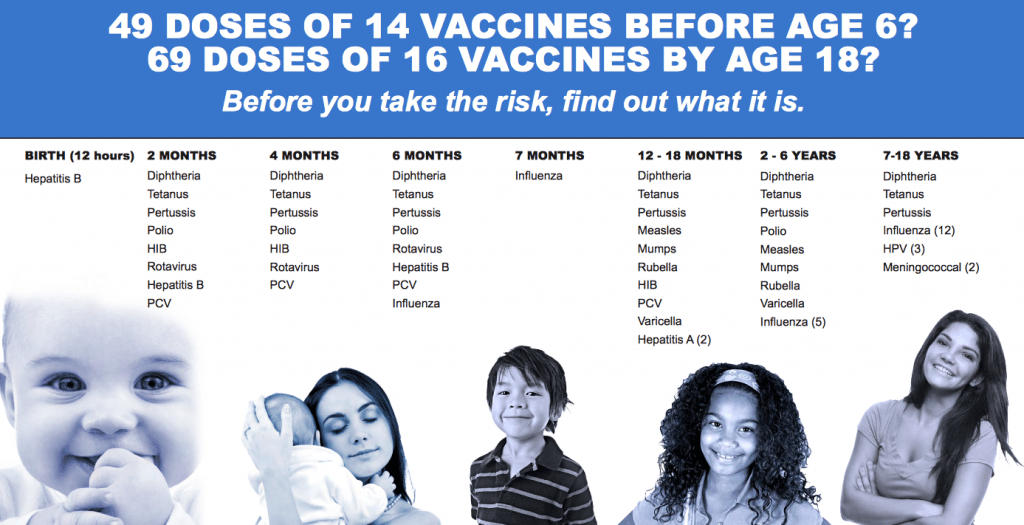 A screenshot from the National Vaccine Information Center (NVIC), used with permission. Unfortunately, there are even MORE vaccines on the CDC recommended schedule now…

Have they ever stopped to think that it is both unethical and immoral for the mainstream media to mock, hate, and lie about people with legitimate and scientifically proven concerns about our current childhood vaccine schedule?

What possible motive could people with vaccine-injured children have to stick their necks out, alienate their friends and family, and see themselves ridiculed? What would make people do something like that? The media is portraying these parents as overwrought housewives with too much time on their hands reading Internet articles they are not equipped to evaluate or backward fundamentalists who are suspicious of all science.

But maybe, just maybe, they have good reasons not to vaccinate their children. Nobody is asking. Instead the media and the mainstream medical culture are insisting that every parent in America just shut up and take your damn vaccines. Every. Last. One of them. And it if hurts your kid, well, that’s unfortunate collateral damage as you perform your moral duty to protect the herd.

Measles vaccine debate: our children are not cattle

But children are not cattle.

The Bible tells us that, “…in the image of God he made them.”

Children come from God, and they are individuals of infinite worth. Their parents have the duty to treat each child as is most appropriate to that individual, to the best of their knowledge and ability.

Parents do not have an obligation to put their own child’s health at risk for the sake of the herd, to put them out on the roulette wheel. (The risk is very small they say, so spin the wheel and suck it up. But if it happens to you, the risk was 100%.)

The person who makes decisions about a child’s health ought to be his or her parents, not the government.
I believe in vaccines. I chose to vaccinate my children. I also ended up bringing my daughter to the Emergency Room after she had a severe vaccine reaction.

MMR is one of our most reactive vaccines and, for whatever reason, it has increasingly become a problem.

The sheer number of vaccines and age at which they are given is also a very real and very worrisome problem, one that has not been properly researched.

The leaders ridiculing and shaming “anti-vaxxers” should be calling for proper scientific research into the health and well being of children who are fully vaccinated compared to children who have received no vaccines.

I spoke with someone yesterday, an adult, who was recently pressured to get an MMR shot when he went to the hospital for a different issue.

This man had measles as a child, meaning he has lifetime immunity and the vaccine was not necessary, but the hospital staff did not bother to ask him about his health history before giving him the vaccine.

This man’s grandchild regressed and became totally disabled soon after his first MMR vaccine. He is four years old now but he cannot talk, walk, or feed himself. The doctors insist that it is a total coincidence. At the same time they have no explanation for why a normally developing 18-month-old boy is now severely disabled.

Anyone interested in understanding why so many parents are alarmed about the massive push to make all vaccines mandatory needs to start listening to parents.

They also need to pay attention to the health of American children.

Or they could talk to veterinary doctors.

In the veterinary community, dogs and cats were vaccinated annually, and every new vaccine was added to the protocol.

Before I became a mother, I faithfully brought in our dogs and cat each year for their vaccines.

It was not until a vet confirmed that my cat developed a vaccine-induced sarcoma, which she died from, that I began reconsidering annual vaccines for my pets.

My horse also developed a mysterious growth. The first thing the vet told me was to stop vaccinating him.

In 2003 the veterinary protocols for cats and dogs were changed to recommend vaccination only every 3 years. This is because pets were being over-vaccinated and it was causing many problems, such as sarcoma, a vaccine injury that, unlike so many possible consequences, was easily determined.

Veterinarians recommend individualizing vaccines to the particular pet and limiting the number of vaccines to just the dangerous diseases. Some recommend vaccinating pets against only one disease at a time so that if a dog or cat has a vaccine reaction they will be able to determine which vaccine caused it.

If everyone is able to freely admit and document how dogs and cats can be damaged by over-vaccination, why are the parents of sick children who are asking the same questions being completely ignored and dismissed? Why do we consider them stupid, anti-science, and selfish?

Are we to believe that children can never be over-vaccinated? Newborns, 2-month-old infants, and small human babies who are receiving far more vaccines than my pets ever did?

If protocols are individualized to animals, why must we be forced into a one size fits all protocol for our children?

About the Author: Lynn Barton is a homeschooling mom of two.

Related content and food for thought:
An M.D. deconstructs what she calls the vaccine safety myth
A Christian mom argues that God does not support vaccines
Why This Yales Scientist has Concerns About Vaccine Timing
13 Reasons Why the CDC is Right and You Should Vaccinate
7 of my Vaccinated Kids Have the Measles Right Now

« The Future of Education in Oregon
Why Every Oregonian Should Oppose SB-442: My Testimony to the Senate Committee on Health Care »