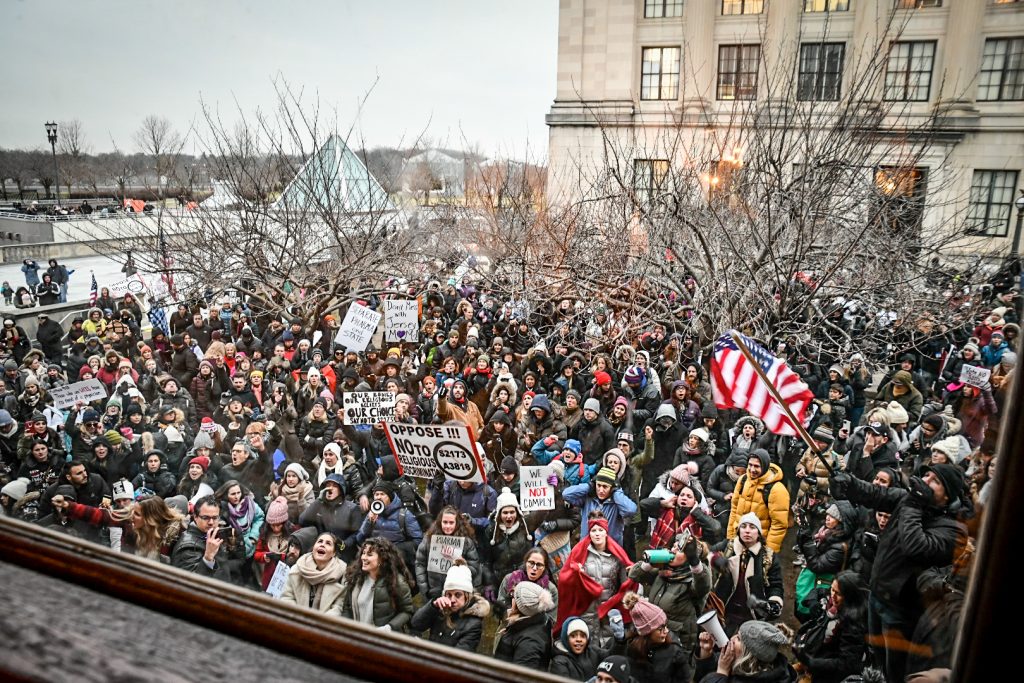 Thousands rallied in Trenton, New Jersey on December 16, 2019 to fight for medical freedom and against school exclusion. Photo courtesy of Susie Olson-Corgan.

The Fight For Medical Freedom in New Jersey

On Thursday, December 12th, 2019, well over a thousand New Jersey citizens and supporters from the Tri-state area descended on Trenton for the Senate Health Committee hearing for S2173, a bill that sought to remove the religious exemption for vaccination requirements pertaining to students from preschool through college. They came to fight for medical freedom, religious tolerance, and school inclusion. If the proposed bill passed, it would exclude children from public and private school if they were missing just one vaccine. You can read the full text of the bill here.

If a bill does not have enough support, it will usually “die” in a committee, instead of being voted on by the entire state senate. That is what should have happened to S2173. But prior to New Jersey’s Senate Health Committee hearing, three New Jersey legislators thought to be “No” votes were replaced by the Committee Chair with legislators who supported the bill. Although this sounds like dirty politics, I’ve been told that it is very much within the scope of the chair of committees to replace legislators.

Instead of dying in committee as S2173 should have, the bill passed with a 6-4 vote and moved to the Senate floor for a full vote. At the same time, the Assembly version of the bill, A3818, was scheduled for a full Assembly floor vote, which led to thousands of people coming back to Trenton on December 16 to protest.

While different states have different ways of introducing bills, it is common to introduce legislation in one house with an identical companion bill in the second house. This is especially likely when sessions are short or the legislation is controversial. If you’d like to understand how a bill becomes a law in New Jersey, click here for a detailed explanation.

With both bills about to go to their respective floors, and very possibly be passed, New Jersey’s governor, Phil Murphy, would have had the option to sign the bill into law that very same day. The new law would go into effect 180 days later, effectively kicking 40,000 students out of school, many of whom were just missing one or two vaccines.

Knowing we were short on time and resources, several calls to action went out: social media blasts and live videos asking people from all over the country to show up in Trenton, New Jersey for the votes on Monday.

Monday morning arrived. There were weather alerts for a snowstorm. Temperatures were dropping. Unsure of road conditions, we were holding our breath that people would brave the weather.

And did they ever!

Thousands of people filled the hallways, the Senate and Assembly galleries, the overflow rooms and the perimeter of the Capitol.

I came from Washington State to join New Jersey’s fight for medical and religious freedom. Others came from California, Texas, Pennsylvania, New York, and Connecticut to stand in solidarity with New Jersey children’s health advocates and champions of medical freedom. Our chants could be heard from the Senate floor as the legislators rushed to try to secure the votes to pass S2173.

Activists opposing the bill spoke to their legislators about why it is unnecessary: There is a nearly 95% vaccination rate in New Jersey, so there is no reason to propose a bill that curtails the religious exemption and excludes children and young adults from attending school. In addition, laws that promote school exclusion are unfair and unjust; these laws disproportionately affect low-income families; and, these laws tend to backfire. Instead of increasing vaccination rates, there is ample evidence that shows that mandating vaccines actually lowers vaccination rates, a subject which is addressed in this new book.

Several hours into the senate floor session, we realized that the Senators were delaying bringing the bill to the floor because they didn’t have the votes needed to pass it. The hope in us grew and the power of the people reemerged. The crowd outside continued to grow.

During a recess, Michael Sarnoff, a chiropractor from South Jersey, joined Del Bigtree and Ali Hamideh outside. Del Bigtree is the former Emmy-award winning producer of the television show The Doctors who now hosts The Highwire, a popular weekly television show which airs every Thursday at 11 a.m. pacific time on Facebook and YouTube. Ali Hamideh is an activist father from New York State who just fought and won his case against New York after his medically fragile child was kicked out of school. Sarnoff, Bigtree, and Hamideh rallied the crowd!

We had champions on our side! We knew we could beat back this exclusionary bill. Texts were going back and forth between myself inside the Senate gallery and Ali Hamideh who was outside rallying the crowd. “We will not comply!” They chanted. “We do not consent!”

We saw Senate President Stephen M. Sweeney and Senate Health Committee Chair Joseph F. Vitale, both Democrats, whispering back and forth. We watched as they, among several other Senators, continued to approach Senator Joseph A. Lagana, another Democrat. Whispers began. We all found ourselves wondering: Was Lagana the swing vote they needed to flip?! 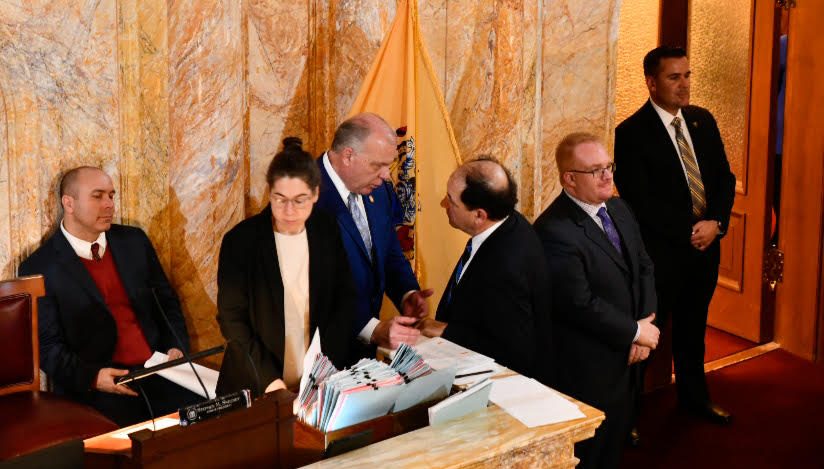 A call to action for a Twitter storm on Lagana ensued. He started receiving hundreds of tweets: “Senator Lagana, we need you! Our kids need you! Please stand with us!” “Stand strong. We stand with you!”And “Please protect families and keep Jersey free!” The twitter storm continued. Senator Lagana kept looking down at his phone. We pushed harder, the chants became louder. “La-ga-na, La-ga-na!”

And then it happened… The bill was pulled. With the pound of the gavel, the session closed.

We did it! Our children could remain in school! Our rights were preserved!

A hard-won victory in the fight for medical freedom

It was a hard-won victory and a cause for celebration.

But the fight for medical freedom isn’t over. We have to prepare for what is to come. The New Jersey Senate goes back into session on January 9th, and closes just five days later on Jan 14th, 2020.

Senate President Sweeney said he will pass S2173. He seems determined to take medical and religious freedoms away from New Jersey and exclude children and young adults from school. So it’s critically important that we double down our efforts. We don’t know if it was the protesters, the meetings with legislators, the sheer numbers that showed up, the emails, or phone calls. We don’t know what stopped this vote, so we must stay vigilant and continue to do it all.

Please get involved in the fight for medical freedom in your state.

Sign up for updates with Innovative Parenting NJ by texting NJSHF to 313131 and be ready to show up in Trenton as soon as you see the Call to Action go out.

Every child in America deserves the right to an education. We all want the same thing: For America’s children to survive and thrive.

Correction: An earlier version of this article incorrectly identified newly elected Senator Mike Testa, an unapologetic conservative Republican from South Jersey, as the person who joined Del Bigtree and Ali Hamideh outside. Senator Testa was very supportive and mingling with children’s health advocates in the senate chambers throughout the day but it was Michael Sarnoff who was outside rallying the crowd. 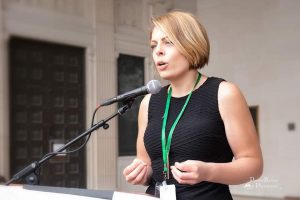 About the author: Susie Olson-Corgan is a health freedom activist, speaker, photographer, and mother of a vaccine-injured child. She travels the country to meet with legislators, doctors, scientists, and parents to discuss all aspects of health and how to reduce the environmental assaults on our children. Susie believes that each person has their own unique ability to create change and works with individuals to identify their skill set to empower them to take action in their community.


Related Content:
Attorney: Oregon’s School Exclusion Bill Makes Medical Exemptions MORE Difficult to Obtain
Why this Oregon Doctor Opposes Medical Mandates
How to Write a Letter to Your Lawmaker to Oppose a Bad Bill
13 Reasons Why the CDC is Right and You Should Vaccinate Your Kids
7 Reasons Why Child Vaccines are the Best Parenting Choice

« My Mom Died Almost a Year and a Half Ago and I’m Still Sad: The Death of a Parent is Hard
23 Reasons to Breastfeed Your Baby »