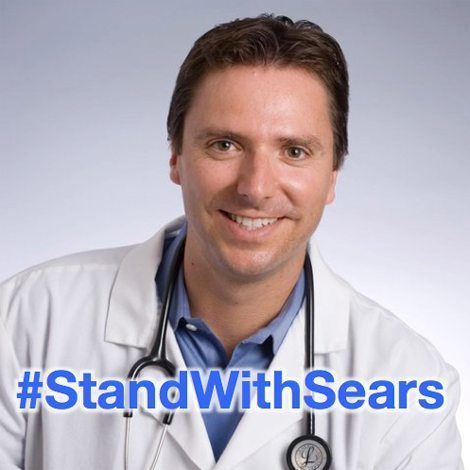 Dr. Bob Sears, M.D., is under fire for granting a medical exemption to a child who had multiple adverse vaccine reactions

Dr. Bob Sears, M.D., is under fire for granting a medical exemption to a child who had multiple adverse vaccine reactions

Dr. Bob Sears, M.D., is a pediatrician in private practice in Southern California. He’s also the author of The Vaccine Book, the co-author of the classic, The Baby Book, and the son of Dr. William Sears. His brother, James Sears, is also a medical doctor.

The Sears are perhaps the most highly respected family of doctors in the United States. They work tirelessly on behalf of children’s health and wellbeing.

I heard Dr. Sears lecture about vaccines to a group of about a hundred parents, mostly moms with small children, in Portland, Oregon, and I’ve interviewed him—both in person and on the phone—several times.

He is well spoken, articulate, scientific-minded, and very fair and balanced.

He describes himself as a pro-vaccine doctor and he administers vaccines in his office every day.

As well respected as Sears is among so many parents, readers, integrative pediatricians, and other colleagues in various health professions, there are some who find his balanced and informative approach to educating the public about vaccines threatening. Especially some California doctors.

An anonymous source told me that several of this source’s colleagues have repeatedly urged their colleagues in the American Academy of Pediatrics to find a way to take away Dr. Sears’s license. In 2015 this source described Dr. Sears as “the second most hated pediatrician in California.” The first being, Dr. Jay Gordon, M.D., an outspoken breastfeeding advocate and a medical doctor who also speaks openly about vaccine safety issues.

The doctors who criticize Sears are not ill meaning. They truly believe one-size-fits-all when it comes to vaccines and that the safety of the public is compromised if even one parent chooses not to vaccinate a child. They do not do independent research for themselves. They follow the recommendations of the Centers for Disease Control and Prevention because they believe the people at the CDC are smarter and better informed than they are. They also believe that parents have no business researching vaccines for themselves. And they feel grave concern that parents are “too selfish” and simply “not smart enough” to make the right medical decisions when it comes to vaccines.

Now Dr. Sears is under scrutiny by the state agency that grants and regulates doctor’s licenses and faces disciplinary action by the board.

He has been accused of “gross negligence” by Kimberly Kirschmeyer, Executive Director, Medical Board of California because he granted a medical exemption to a toddler who had had two serious and separate adverse reaction events to infant vaccines.

The public can read the full complaint here. 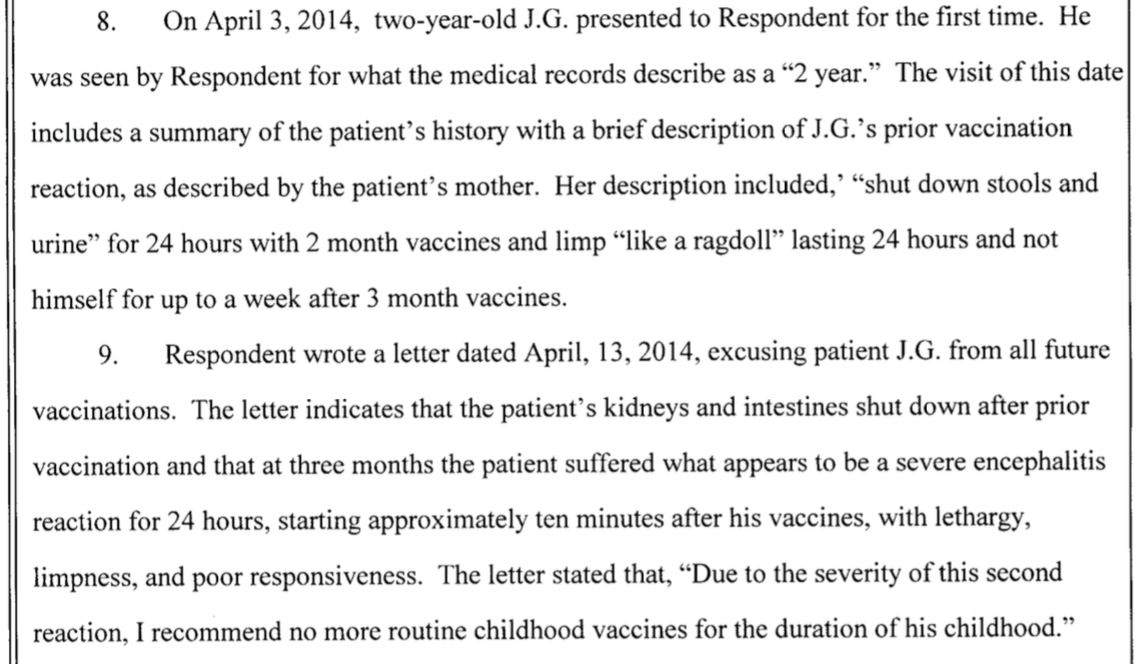 The toddler’s medical records note that the mother said the baby’s bladder and bowels shut down after his 2-month shots and that he went “limp as a rag doll” for 24 hours after his 3-month shots.

I don’t know about you, but that sounds very concerning to me, both as a mom of four children and a science journalist.

Vaccines are administered to otherwise healthy children and must be held up to the highest safety standards, as Dr. Cindy Schneider, M.D., in Phoenix, Arizona, has pointed out. If a child has a concerning vaccine reaction, doctors must take this seriously.

In this case, the mother went ahead with the baby’s 3-month shots and saw more concerning adverse reactions. In reality, to have continued to vaccinate this child may have constituted gross medical negligence.

“Dr. Sears, by granting a medical exemption, may very well have saved a young child’s life while causing no harm to the public,” said Dr. Paul Thomas, M.D., a pediatrician who has over 13,000 children in his private practice in Portland, Oregon, Committee Chair of Oregonians for Medical Freedom, co-author of the Amazon best-seller, The Vaccine-Friendly Plan (full disclosure: I am the co-author of this book) in a press release. “As many remember during the SB 277 proceedings, Californians were publicly and repeatedly reassured by Senator Richard Pan, M.D. that doctors would not be under inappropriate scrutiny for providing medical exemptions from vaccines for at-risk patients. How much more at-risk can a child be than one who has suffered multiple adverse vaccine reactions?”

I also stand with every family who was dismissed from their pediatrician’s office because they wanted to follow a slower, gentler, more evidence-based European-style vaccination schedule, and with every family whose doctor refused to listen to their concerns and whose children subsequently suffered serious health problems not of their own making.

I ask all of California’s doctors to honor informed consent, pay attention to individual risk factors and medical history, listen to families’ vaccine concerns, and respect the sanctity of the doctor-patient relationship. 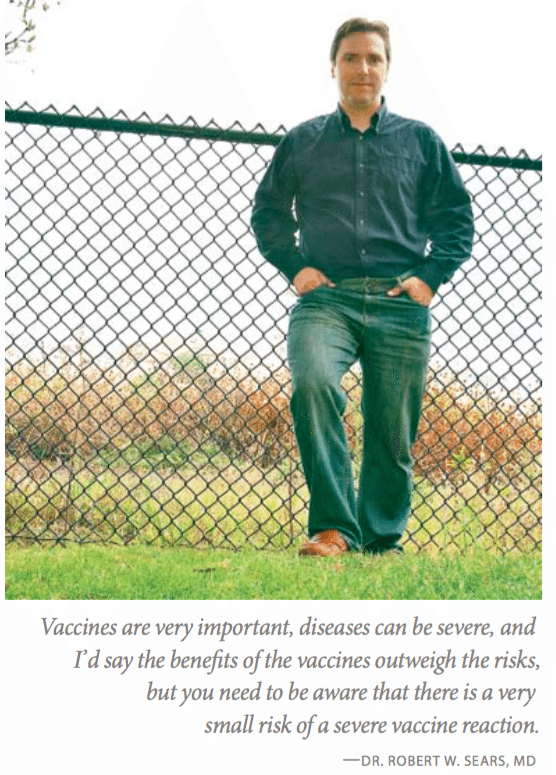 Screenshot of Dr. Bob Sears, M.D., from the article, “The Vaccine Debate,” published in Mothering Magazine