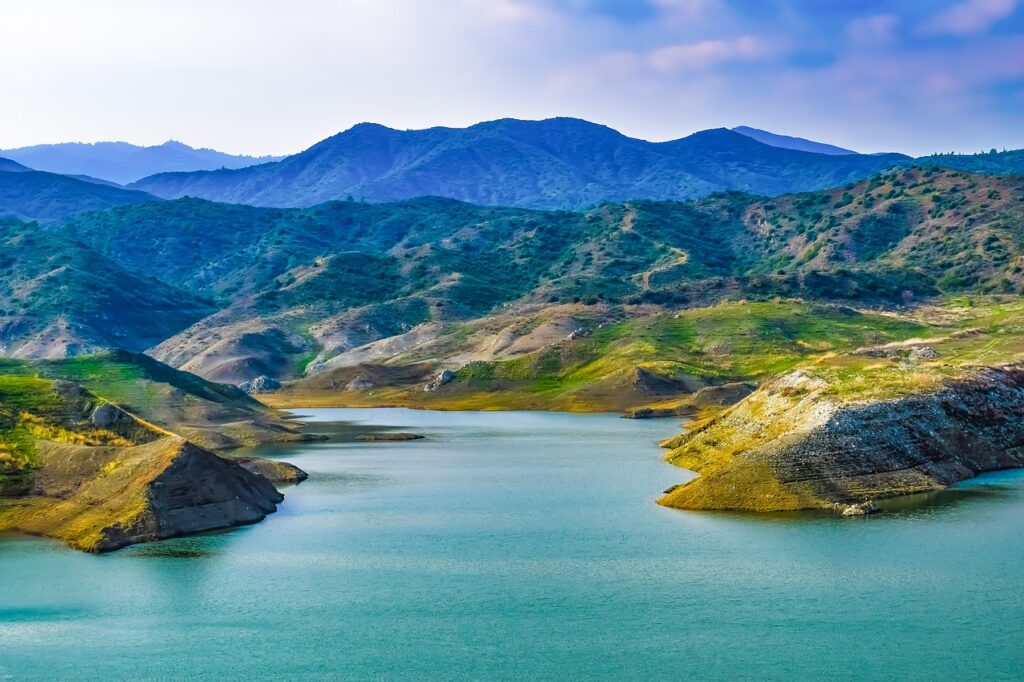 Coronavirus in Cyprus. People living in this island nation in the eastern Mediterranean are reporting that the situation in the Republic of Cyprus is critical. But not because of coronavirus itself. Because of the response.

Jeopardizing the health and freedom of the citizens of Cyprus

We received a plea from a reader who lives in Cyprus. This reader would like the world to know about how the government’s response to coronavirus in Cyprus is harming Cypriots. The information that follows comes from them. However, fearful of backlash, they have chosen to remain anonymous.

The Cypriot government has instituted draconian lockdowns, criminalized human activities like dancing, and insisted on vaccines as a prerequisite to participating in public life. This response to coronavirus in Cyprus is jeopardizing the health and freedom of the citizens of Cyprus.

Of the nearly 50,000 people who have tested positive for Covid-19, only 268 people have died from coronavirus in Cyprus. The population of the island is approximately 1,215,000 people. While other island nations, like Haiti (that has never enforced decrees on even masking or social distancing) and Anguilla are opening up, Cyprus is doubling down.

At the same time, the economy is suffering, people’s liberty is under fire, and the government’s draconian decrees are harming people’s health and well-being.

An economy in ruins

Cypriots report that their economy is in trouble. Many businesses, only fully open for six out of the last 16 months, have shut permanently. Others, no longer financially viable, may be closing soon. While government and bank employees are doing fine, most Cypriots have seen their incomes decline.

Forced to mask at all times

Mask decrees have been in effect in Cyprus since September 2020. Anyone over 12 years old must wear a mask in all indoor and outdoor spaces. If you are caught without a mask, the government will fine you. These fines cost €300 ($360) per person, per violation. A steep price to pay for people who are out of work or have had their income vastly reduced.

“We’ve lost track of how many months we’ve been living under a 9 p.m. to 5 a.m. curfew,” my reader tells me. For a few days last month the curfew was extended to 11 p.m. in Cyprus. But then there was a third lockdown and Cypriots were forced to be inside their homes by 9 p.m. Currently the curfew is back to 11 p.m. Anyone caught out past the curfew is subject to a €300 ($360) fine.

In order to go to work in person, nasopharyngeal swab testing is obligatory. Frequency of testing depends on the number of employees in each company. Most companies in Cyprus are small to medium in size. People have had to stand in line and get tested weekly.

Nasopharyngeal swab testing can cause injuries, which is what happened to this woman in her 40s, and this 67-year-old.

But this form of testing was the only kind the government deemed acceptable for three months. Now the government is allowing nasal swab tests that are not as intrusive as nasopharyngeal. Employees may not opt out. Those who do not want to be subjected to weekly testing report being verbally threatened by their employers. Mandatory testing has been in effect since February 1.

Even children 12 years of age and above must submit to weekly testing. If they don’t, they’re not allowed to attend school in person.

“We probably have the harshest measures enforced in any country in Europe,” my reader says. “Cyprus is the only country in the world to mandate nasopharyngeal tests on its students and employees.”

While selling tests to the government has made some people rich, the safety and accuracy of these tests have been called into question. In fact, even the World Health Organization does not consider these tests to be the gold standard anymore.

To compound the problem, in Cyprus they are still performing tests at high cycle thresholds, which yields false positives. It’s likely that the number of cases of coronavirus in Cyprus are artificially inflated.

Forced to stay inside

In November 2020, the government drastically limited Cypriots’ freedom of movement. Every citizen was allowed to leave their homes only twice per day, and these outings had to be pre-approved via SMS.

Only employees from certain sectors of the economy who could provide documentation from their employers were allowed to leave their homes more often. Police were issuing fines to anyone caught out of their homes who didn’t have an “approval SMS.” This fine was also €300 ($360).

Up until April 26, restaurants and bars in Cyprus were not allowed to play music that encouraged dancing. Dancing was prohibited, considered a fineable offense. And the government issued fines to people caught breaking this mandate. Then, during the lockdown that lasted until four days ago (May 9), bars and restaurants were shuttered. The new decrees have not specified whether dancing will still be illegal. It is unknown whether people who may enter establishments will be allowed to dance.

The third harsh lockdown lasted from April 26 to May 9. After the Cypriot government has instituted a new state of affairs. The SMS exit-permission system has now changed to what was first called CoronaPass and has now been renamed SafePass (due to its name conflict with Microsoft’s App.)

You may receive a SafePass if you:

By July, the government is expected to introduce the digital APP version of the SafePass. Antibody tests or T-cell tests are not accepted for issuance of a SafePass.

In order to leave your home in Cyprus…

The SafePass is required for anyone over 12 years old. You must have it to enter a bar, café, mall, department store, place of worship, hotel, martial arts schools, gym, outdoor or indoor cinema, or theater. It’s also required to attend weddings, funerals, and christenings.

Initially the Health Minister said SafePass would be a temporary measure. But now government officials are suggesting it will be “long term.” The Deputy Government spokesman blatantly said that the “road to freedom” is by the “public proving they are not infected.” So every citizen of Cyprus is sick until proven healthy.

You can vote, without presenting a negative Covid test.

Many Cypriots believe this situation is absurd.

“In our upcoming Parliamentary Elections on May 30,” the reader who contacted me explains, “everyone is allowed to physically vote. No one need present a negative Covid test. And in-person voting is the only way to vote in Cyprus.”

Both uniformed and plain-clothed police, as well as inspectors from almost all government ministries, departments, and municipalities will enforce this new system. Private security companies are also being contracted to help enforce the decrees.

In March the government of Cyprus devised a novel way to solve the unemployment crisis they brought about with the economy-crushing measures they’ve adopted for a year now. They hired hundreds of people, enticing them with a €1000 ($1,202) salary to act as so-called ‘Covid Cops.’ These people roam the country snitching on their fellow citizens. Their job is to enforce the decrees.

Some local lawyers, including the president of the Cyprus Bar Association, have bravely criticized the government overreach and decrees. They argue that the response to coronavirus in Cyprus is illegal and unconstitutional, a blatant violation of human rights. Government critics say that these decrees are legally void as none of them has been submitted to parliament for ratification, which national law requires.

With the new decree announced on May 9 about the creation of SafePass, lawyers are now preparing to proceed with lawsuits.

Indeed, a lawsuit was filed on Friday April 23. There are 67 parents in the suit representing 88 children. These parents are suing the government, the health minister, and the minister of education. The suit protests making children’s physical access to schools contingent on weekly Covid testing. A hearing is set for Monday, May 17.

Some Cypriots skeptical about the safety, efficacy of vaccines

Despite the fines for masking non-compliance, extreme limitations of daily movement, a nightly curfew, and mandated weekly Covid testing for access to employment and education, vaccine compliance was still low.

However, following the announcement of the third lockdown, which happened three weeks ago, that changed.

After the government insisted the lockdown would only be lifted contingent on the introduction of a SafePass, 35% of Cypriots received their first Covid-19 vaccine. Now 11.4% are fully vaccinated.

At the same time, the government has announced that they will no longer include vaccine status when announcing Covid deaths.

My reader in Cyprus believes the government’s SafePass is a methodical move to force people to comply with the Covid-19 vaccine program. Concerns about vaccine safety are being completely ignored.

Asking the non-vaccinated to stand in lines for two to three hours in the baking sun in order to submit to tests every 72 hours is a case in point. Even worse, the Minister of Health has hinted that the government will likely not provide these tests for free to the public for much longer. The monthly cost of paying for testing for a family of four is roughly €320 ($384), an unaffordable amount when most households are struggling financially. 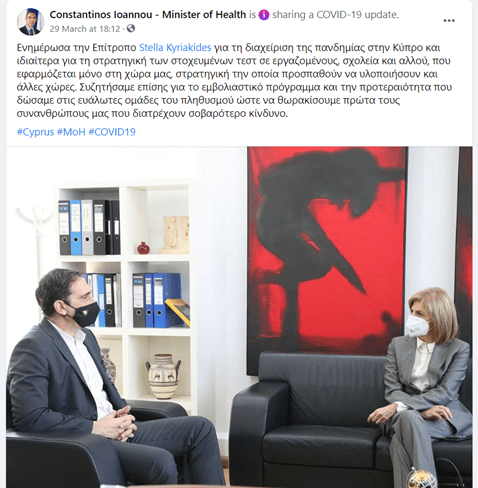 March 29, 2021 post from the Cyprus Minister of Health, Mr. Constantinos Ioannou. He explains that Cyprus is the only country in the world enforcing weekly testing. Pictured here speaking to the Brussels-based European Commissioner of Health. Ms. Stella Kyriakides negotiated the deals on behalf of the European Union with four vaccine companies (AstraZeneca, Moderna, Pfizer, J&J). Ms Kyriakides is Cypriot.

A plea for help

My reader tells me that people in Cyprus are facing restriction after restriction. The result is extreme economic hardship and mental health challenges because of this response to coronavirus in Cyprus.

While there have been some public demonstrations, government police have responded with violence, breaking up the demonstrations using brute force. Freedom-minded protestors speaking out against government corruption and coercion are being continuously dragged to court. They’re facing numerous charges that carry fines of up to €50,000 ($60,000) and up to 1 year in jail.

“The only reason why our government is so emboldened and has brashly acted this way is because no one from abroad has called them out for what they are doing to us,” my reader says.

“No other country in Europe has enforced the kind of fineable decrees and SMS-linked limits on daily outings that we’ve endured for months. Or forced weekly nasopharyngeal and nasal swab tests.

“Moreover, no other country has imposed via finable decrees that in order to access areas of society we should either be vaccinated or test negative for Covid or have tested positive Covid in the last six months.”

“This is a plea for help,” my reader says. “We want the whole world to know of what’s happening to us here with the response to coronavirus in Cyprus.”

What can the world do to help?

Contact public officials in Cyprus, via email and social media. Tell them you don’t think their response to coronavirus in Cyprus is warranted. Let them know that destroying the economy and coercing vaccinations by limiting freedom of movement are not the way forward out of Covid and into good health.

Social Distancing is the Wrong Strategy
Vaccine Opposition in Estonia
How Wearing a Mask Harms Your Health
Can You Still Get Covid After Vaccination?
13 Reasons Why the CDC is Right and You Should Vaccinate Your Kids

« Amount of Aluminum in Vaccines Akin to “Playing the Lottery,” Research Scientist Says
TMS Therapy For Depression: My Story  »