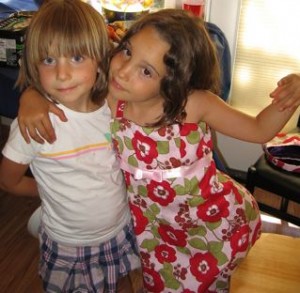 Sisters! They are 19 months apart. Their births were very different.

My second baby is seven years old now. She and I spent the day together and she decided this afternoon that she wanted a Web page. So we built her one in Dreamweaver. It seems a fitting time to post this column, a version of which was originally published in the Ashland Daily Tidings as part of my “Tales From the Crib” series, about the day my second baby was born.

I assumed my second baby would be exactly like my first. This idea was so implicit in my understanding of the world, and of myself as a mother, that I believed that our second born would weigh the same, look the same, have the same temperament, and come two weeks early, exactly like its sister.

I didn’t go into labor with my second baby until three days after my due date. It started during the African dance section of toddler music class when Hesperus, my willful 19-month-old, had insisted I carry her. My best friend Sue and my husband James pretended not to be self-conscious about parading around the room without a small child to dance with and I boogied to the African beat with as much enthusiasm my miserably pregnant self could muster.

On the way home in the car a contraction hit me full force. I leaned out the window and sucked in the February air. But I had had so many other contractions that I wasn’t sure this one counted. So I ignored it.

By the time we were back home, I was in full-fledged labor.

“Call me back if anything changes,” the midwife insisted. I lay down. For two weeks we had the bed ready, sleeping uncomfortably on two sets of sheets with a plastic covering wedged between.

The idea was you peel off the sheets that you labored on and the plastic covering protects the clean sheets underneath. But since I hadn’t gone into labor James and I had been sweating on our sheets for fourteen days. I was too miserable about Sue being in town and no baby being born and being hugely pregnant to even consider removing the plastic.

I lay down on my side and another contraction hit me, strong enough to get me out of bed.

“James,” I called quietly. Our toddler was napping peacefully in her crib. Every day she and I practiced our noises, making ooos and ahhhs and grunting like constipated swine, so that she wouldn’t be surprised when the baby was born. I had two people on standby to come be with her in the house. But all of a sudden I knew I wouldn’t call anyone.

James came upstairs. Sue trailed him, looking at me tentatively. The contractions were coming steadily now.

“Should we call the midwives?” James asked.

“It doesn’t hurt enough yet.” I was adamant.

I decided to take a bath and I stood under the hot water in the dark bathroom oohing and ahhing and letting the tub fill up with water. Between contractions I rested in the water. During the contractions I heaved my naked self up and hung from James, giving him all my weight as the pain intensified. Sue held my hand, her face green with concern. Hesperus woke up as I was getting out of the bathtub and Sue took her downstairs to play.

Then the phone rang.

It was my father.

“Jennifer’s in labor,” James said, gesturing with his hand and pacing the room.

A contraction hit me like a hurricane. “JAMES,” I knew I was screaming but I couldn’t help it. “GET OFF THE FUCKING PHONE!” In the thirty-one years that I had known him, I had never once sworn in front of my father.

“CALL THE FUCKING MIDWIVES!” The contractions with this second baby were coming close together now, plowing into my body furiously.

Twenty minutes after the midwives arrived our daughter was born.

Two days later, James held our fair newborn by the window in the flat, white winter light reflected from the snow. The baby’s eyes were not blue like most newborn’s, but grey—pure, dove grey.

“You have grey eyes, baby,” James told her. “Athena glaukopos” he said in Greek, reciting from the Odyssey he had read in college. “Grey-eyed Athena.”

Her gray eyes made him think of the goddess of wisdom and war, the Greek patron of the arts who sprung from Zeus’s head and guided Odysseus in clever misadventures on his journey home.

We had never even considered Athena yet I knew that was the only name this baby could have.

Related posts:
You Know You’re a Crunchy Mom When (Take the Test)
Welcome to the World, Precious Baby
Learning to Love Pink

« My Son’s Sensory Processing Disorder Was Caused By the Hib Vaccine
Aluminum Toxicity in Infants and Small Children, a Cause For Concern? »