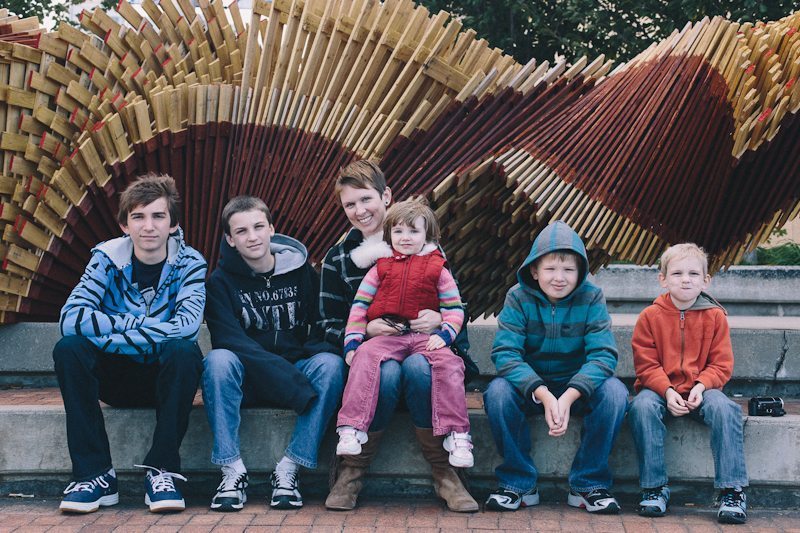 Meagan Francis, author of Beyond Baby, with her children: four boys and one girl.

I’ve always admired Meagan Francis. She’s a big ideas person, she makes things happen, and she has an incredible amount of energy.

Nine years ago, when I was the creative nonfiction editor of Literary Mama: Reading for the Maternally Inclined, we published a heartbreaking, beautiful story Meagan wrote about her mom, who passed away when Meagan’s son was only six weeks old. I still think about that story.

Meagan and I have shared hotel rooms together at writing conferences (she hogged the pillows), been out for beers when I was visiting Chicago (I still liked beer then. Now I prefer wine. Is that weird?), and spent hours talking writerly bloggerly shop.

At one point, not long after my family moved from Greenfield, Massachusetts, to Ashland, Oregon, Meagan and I both had three kids and we were both lamenting feeling exhausted and nauseous. Then Meagan sent me an email with one symbol in it: “+” … and I got my period (hallelujah).

Meagan Francis is an amazing “authorpreneur.” When she told me she has a new e-book launching this week, Beyond Baby, I jumped on the opportunity to ask her about it.

JM: What gave you the idea to write Beyond Baby?

MF: A couple of years ago, when my youngest daughter was around two and a half years old, I realized I was in a totally unique place in my life. Not only was I no longer nursing or carrying around a baby on my hip, but I wasn’t pregnant and had no plans to get pregnant EVER again. It was literally the first time since becoming a mom that I had one child moving out of the baby stage, without another “baby” to take his place.

I was surprised by how conflicted my emotions were about the whole thing!

I didn’t actually want more children, but I’d defined myself as a mother of little ones for so long that it felt simultaneously freeing and a little melancholy.

Over the next year or so I worked through a lot of those issues and began finding ways to put the focus back on myself in some important ways, tapping into dreams that had been on the back burner for a very long time, and in general, crafting a life I could love for the long haul—as my kids get older and I move further away from the “baby stage.”

Back in September I launched an email course helping other mothers navigate the transition from “mom of babies” to “mom of bigger kids,” and it was so well-received that I decided to expand the material into a book.

JM: You became a mom when you were really young and you have a whole bunch of kids. Do you think moms need something more than being moms?

MF: I really do. I think there is definitely a time in our lives when that singularity of focus is normal, natural, and even to some degree, necessary. But it doesn’t last forever.

Babyhood lasts such a relatively short time in the grand scheme of our lives, but it’s easy to get so wrapped up in being needed, in sacrificing, and putting small helpless people first that it becomes a habit.

Beyond Baby encourages moms to put the focus back on themselves again, in small, incremental ways.

JM: What’s one thing you wished you knew as a new mom during those first intense years when you feel like you’re never going to sleep again?

MF: That it’s over so fast.

It’s so cliché, and nobody wants to hear “oh, it flies by!” when they’re in the thick of exhaustion and frustration. But in some ways it can be both encouraging to know it won’t last forever, and a reminder to just pay attention while it’s happening. 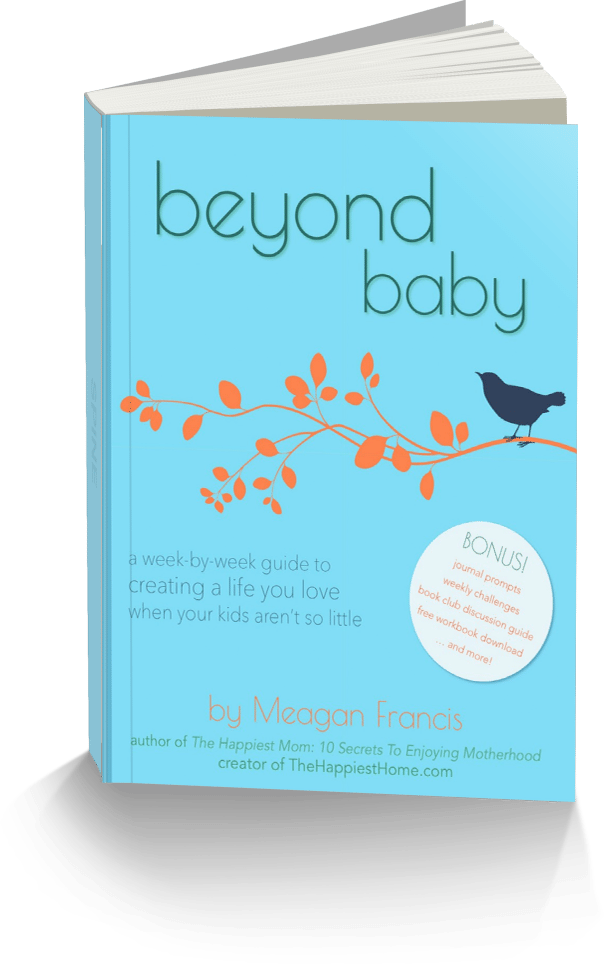 Meagan Francis’s new book, Beyond Baby, helps moms figure out what they want to do with their lives once their children grow up.

JM: What’s your favorite story from Beyond Baby?

MF: Oh, there are so many! Most of the chapters begin with an anecdote and lesson learned from my own life. One in particular that comes to mind was the story of finding out that I had early-stage cervical cancer last year. I’m fine now, but it was a really scary and emotional time for me. It also forced me to acknowledge that I had been really lax about my own health care. I’d basically relied on prenatal and postpartum care as the only times I got in front of a health care provider for over a decade, and while I was actively in the childbearing stage it was enough, because I was having full workups regularly over a period of nine months, repeated every couple of years. But then when there was no new pregnancy, I just lost track of time and about four years went by between Pap smears.

I think that’s probably a very common thing in moms who are in the active stage of mothering—we lose track of time, or just forget how much older we’re getting, because we’re so caught up in the day to day of parenting.

I wrote about that experience on my blog and heard from so many women who could relate, and vowed to make the appointment they’d been putting off—it was really inspiring.

JM: Where can people go to find out more about Beyond Baby and you?

MF: Two places! I’m the editor of the site thehappiesthome.com, dedicated to the art of sane and satisfying family life. It’s all about embracing the things that really matter to you and creating the kind of home that nurtures you and your family.

My personal blog is meaganfrancis.com, and that’s where you’ll find more information about me and my offerings like classes for mom writers and entrepreneurs, coaching, and speaking.

You can also watch the book trailer.

Is being a mom (or dad) the way you most define yourself? Do you feel like you’re going to have an identity crisis when your youngest grows up?

« My 4-year-old Has a Broken Heart
How my son nearly drowned, and what you need to know »