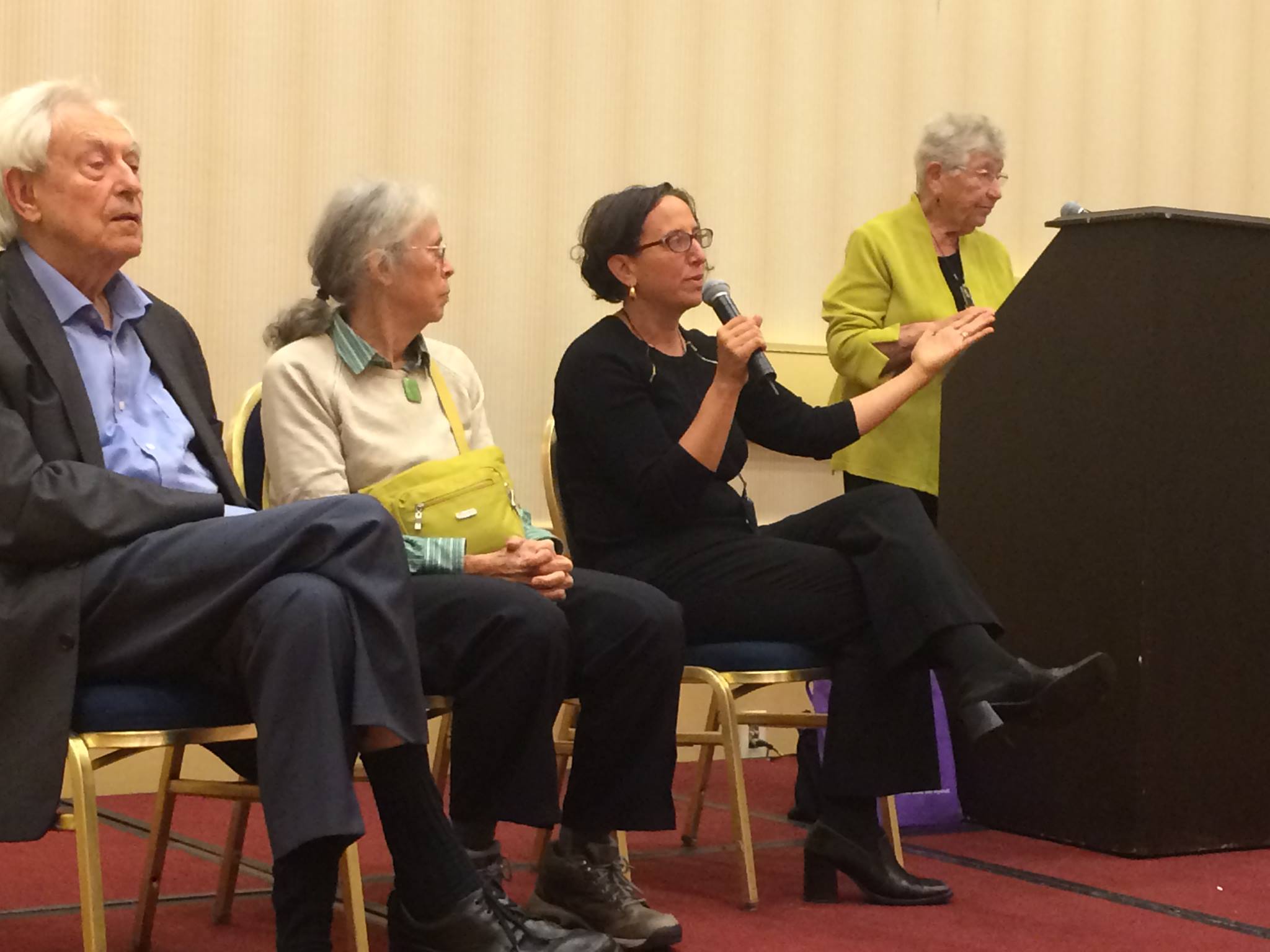 Joel Evans, M.D., an integrative ob-gyn and founder of The Center for Women’s Health.

Lori Feldman-Winter, M.D., pediatrician and Chair of the Policy Committee for the American Academy of Pediatrics Section on Breastfeeding.

Ina May Gaskin, the most famous midwife in America, author of Spiritual Midwifery and Ina May’s Guide to Childbirth.

Henci Goer, an award-winning medical writer and author of The Thinking Woman’s Guide to a Better Birth.

Jennifer Margulis, Ph.D. (aka me), award-winning science journalist, Fulbright grantee, author of Your Baby, Your Way and co-author of The Vaccine-Friendly Plan.

The name of the BirthWorks International conference explains its philosophy: BirthWorks.

Birth works. Which it does. Except when it doesn’t. 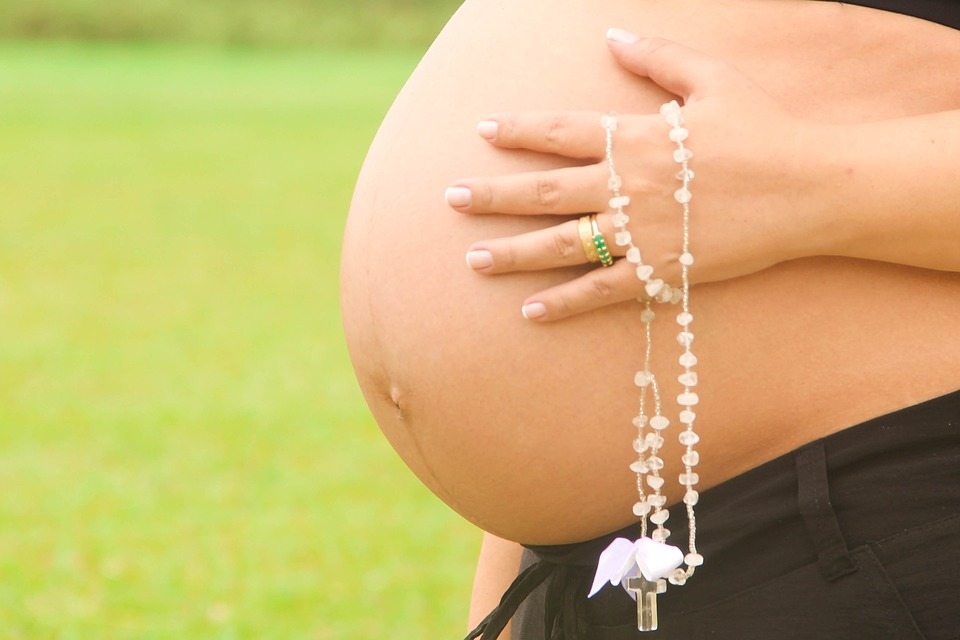 Pregnancy is a state of good health, not a disaster waiting to happen. Photo via Pixabay.

And in America, unfortunately, birth is not always working very well.

While other countries have been making substantive improvements in how they care for women during and just after labor, America’s maternal mortality rate has continued to rise.

We have the highest maternal mortality rate of any country in the industrialized world.

Our infant mortality rate, while it has been improving, is also ignominiously high.

We also have sub-par breastfeeding initiation rates in the United States, which results in many unnecessarily sick babies and costs our health care system over $13 billion a year.

Most of this is yesterday’s news. In the 15 years I’ve been researching and writing about women’s health, children’s health, and childbirth, the situation has sadly gotten worse. Our Cesarean rates have climbed and the rates of chronic disease among our children have skyrocketed. Today’s young people are so misinformed about and frightened of birth that it’s not uncommon to hear young women say things like, “I don’t want to give birth because I’m afraid my vagina will explode.”

Since ours is a for-profit system, anything that adds money to the system is a win for the hospitals, pharmaceutical giants, insurance companies, and doctors.

There are perverse economic incentives to keep people sick. 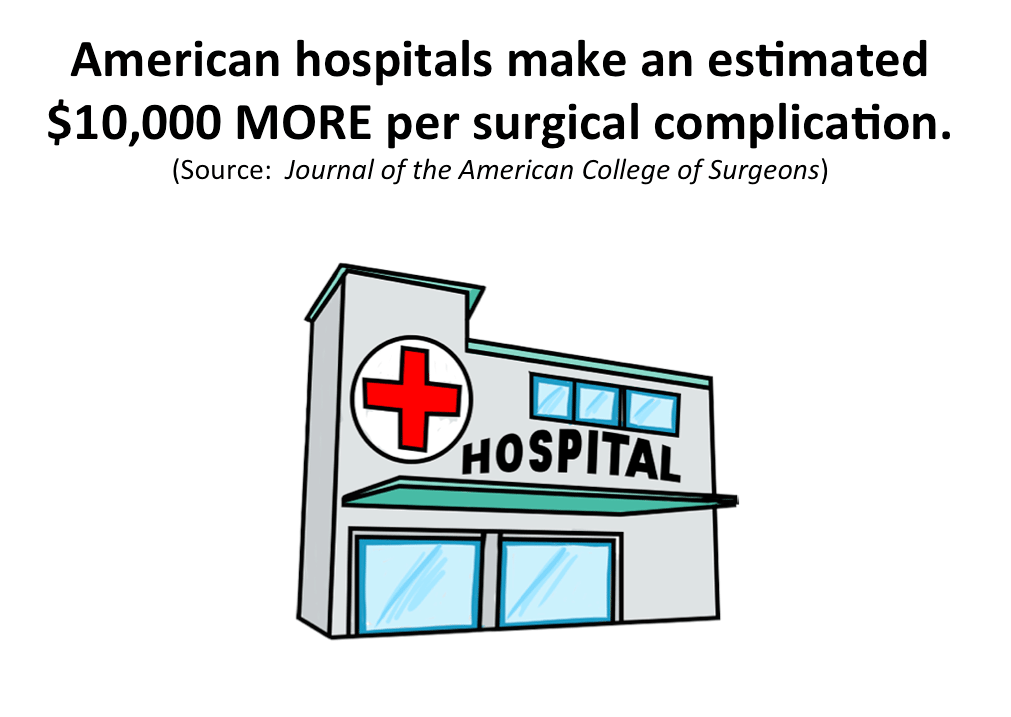 “That’s a conflict of interests, isn’t it?” A Canadian doctor who sat next to me on an airplane asked, incredulous.

Obstetricians advertise branded formula to pregnant women through “free” samples, coupons, and branded gifts; post-partum nurses get continuing education units from formula-sponsored “experts,” passing on their bogus “knowledge” to new moms by wrongly telling them that infant formula is similar to breast milk. Infant formula companies set up breastfeeding hotlines (with the sole goal of capturing new moms’ personal information so they can sell them formula and destroy their breastfeeding dreams.) Pediatricians are not adequately trained in breastfeeding support, and even lactation consultants sometimes undermine women’s ability to breastfeed.

A perfect storm of booby traps.

Breast milk is not just the perfect food for newborns, Dr. Feldman-Winter explained. It is a substance teeming with immune properties that protect the baby from disease. Artificially fed infants are more susceptible to infectious disease and even death. Formula-fed infants do not get the passive immunity from the antibodies found in mother’s milk. Even more troubling, infant formula promotes the growth of harmful gut bacteria whereas breast milk encourages optimal microbes to flourish. These microbes, in turn, help babies fight off disease. 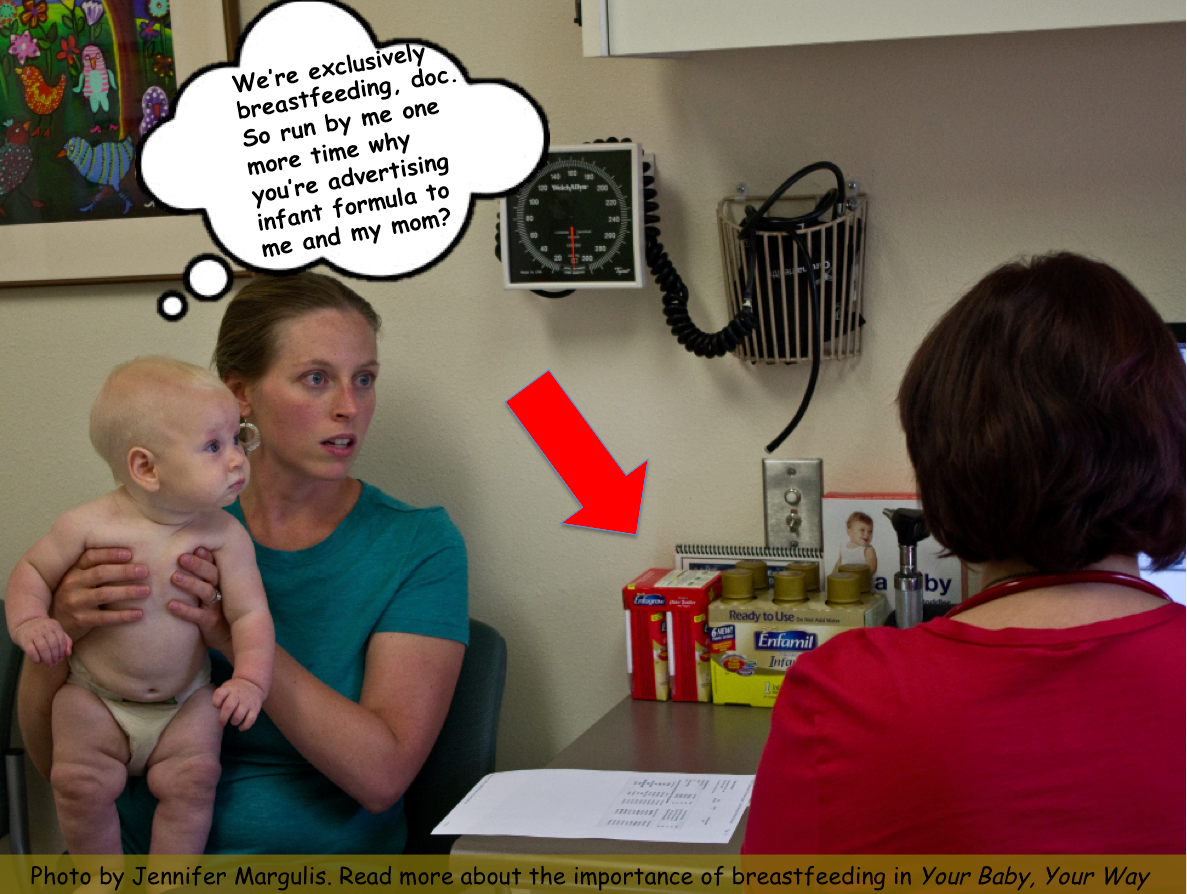 American doctors who say they support breastfeeding give “free” samples of branded infant formula to nursing moms. By advertising infant formula in their offices and institutions, American hospitals and doctors play a key role in promoting poor health.

There was a film screening Thursday night of In Utero, a documentary that explores the importance of an infant’s time in the womb, arguing that early in utero trauma, including stress and sub-standard nutrition, can affect a baby for a lifetime.

The documentary discusses how some of the effects experienced in utero can be passed down to a fetus’s grandchildren.

One situation in particular was explored in the film and also mentioned by other speakers at the conference: the Dutch famine of 1944-45. When Dutch mothers in World War II were on restricted rations, their fetuses adapted by epigenetic changes brought on by starvation.

These babies were followed into adulthood, and their offspring were also studied. It turns out if you mature in utero in starvation conditions but then have enough to eat as an adult, you are going to have lasting health effects. Offspring of Dutch women who were malnourished in the first trimester after conception were much more likely to become obese, have cardiovascular disease, diabetes, and even mental health problems. When epidemiologists followed these adult children’s children, they continued to see health effects. The conclusion drawn from studying this population is that it’s not just the mothers and babies affected by how much food they had during pregnancy. It is also their children. So while it is true that you are what you eat it also may be true that you are what your grandmother ate.

The philosophy of most of the speakers was that the most common reason for birth not working is interference. In her talk, Ina May Gaskin reminded the audience that cervical dilation is not controllable by the conscious mind.

“Try to sneeze,” she urged everyone listening. “Right now. Make yourself sneeze. Without pepper.”

Michel Odent, an obstetrician who is a champion of natural vaginal childbirth, explained that in order for birth to work a human mother has to turn off the neocortex, the thinking, less primitive part of the brain. The neocortex is involved in higher functions, including conscious thought, language, and spatial thinking. Neocortical inhibition is the key to a successful birth, Odent insisted, which is why the lights must be low for a woman giving birth, it is better to speak softly, or not speak at all, and a woman must feel safe, protected, and undisturbed.

Medical researcher Henci Goer and others explored how much of what is done to pregnant women in the hospital setting flies in the face of scientific evidence and best practices.

The science shows that electronic fetal monitoring does not improve fetal outcomes (but does make it more likely that a woman will have a surgical birth). A woman must be allowed freedom of movement during childbirth; continuous labor support from a loving helper (like a doula or a midwife) helps a woman have a shorter, more positive birth experience and avoid unnecessary interventions, including vacuum extractions and C-sections; lying flat on one’s back is the worst position for a woman to have a baby, and labor augmentation (in the form of synthetic oxytocin) should not be routine.

There’s no such thing as normal

In her talk on Saturday morning, midwife Ina May Gaskin showed a slide of a reindeer with her baby. The calf was nursing.

“Baby reindeer don’t have horns,” she said. “Which is a good thing.” 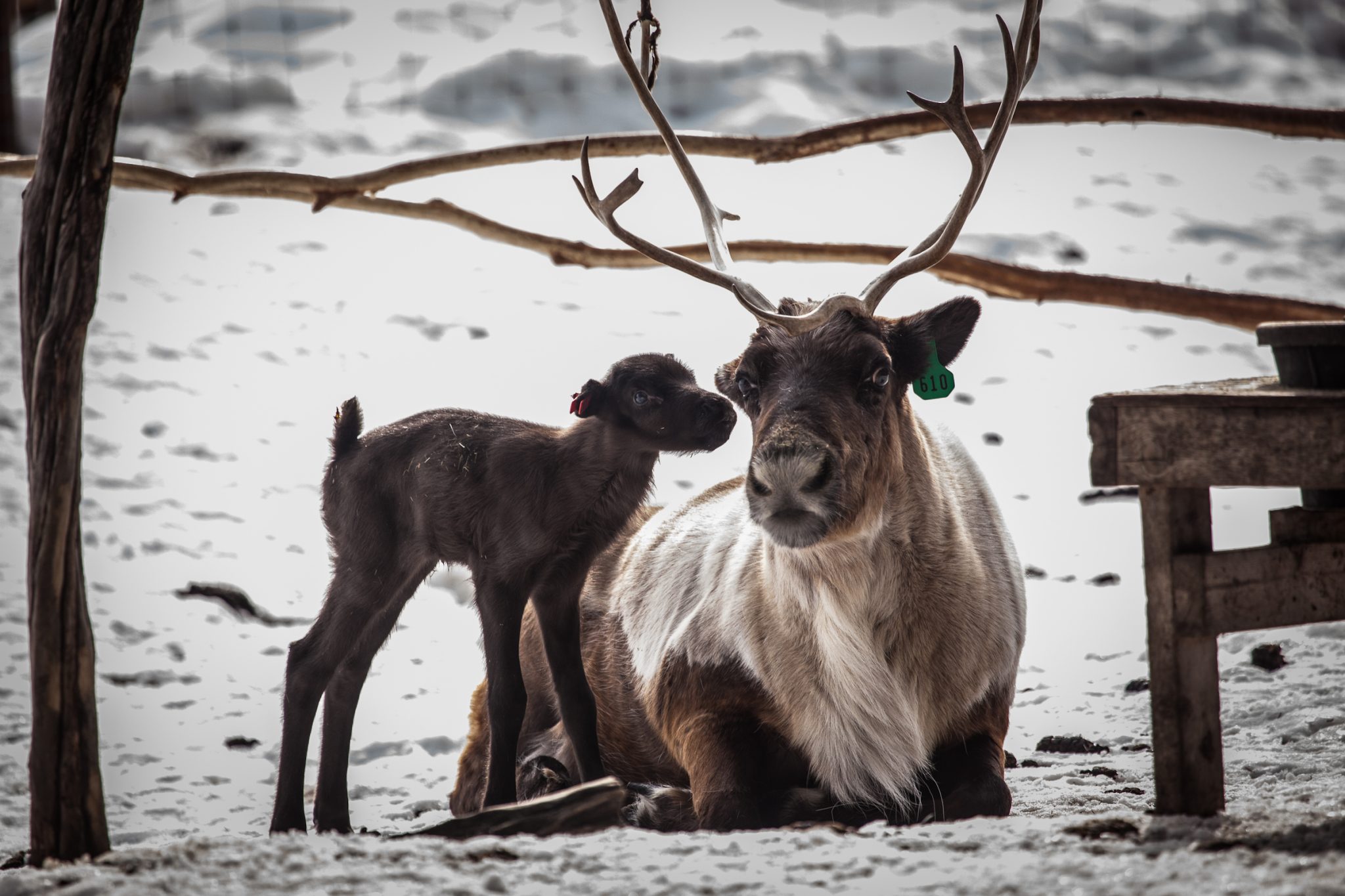 Lessons from Ina May Gaskin: Ina May points out that it’s a good thing newborn reindeer have no horns (which would make it hard to nurse). Her point? Nature’s designs work well, in animals AND in humans. Photo via University of Alaska Fairbanks.

Baby rhinos are born without a horn either. And baby porcupines don’t have quills.

“Wouldn’t be good for bonding if they did,” Gaskin quipped in her matter-of-fact way.

There’s no reason to believe, she went on, that humans are poorly designed, that we are so dysfunctional in our bodies as to be incapable of birthing vaginally, like bulldogs.

At the same time, she said, we must create conditions for optimal birth and understand that no birth is the same as any other. Ina May Gaskin shared that she has attended first-time moms who gave birth in twenty minutes and other moms whose labors lasted nearly two weeks. As long as the mom and baby are doing fine, there is no one rule, time limit, or pattern that labor has to follow.

Ina May Gaskin said it is normal to get to 10 centimeters dilated and have no urge to push. And when that happens often the best solution is for mom to take a nap. 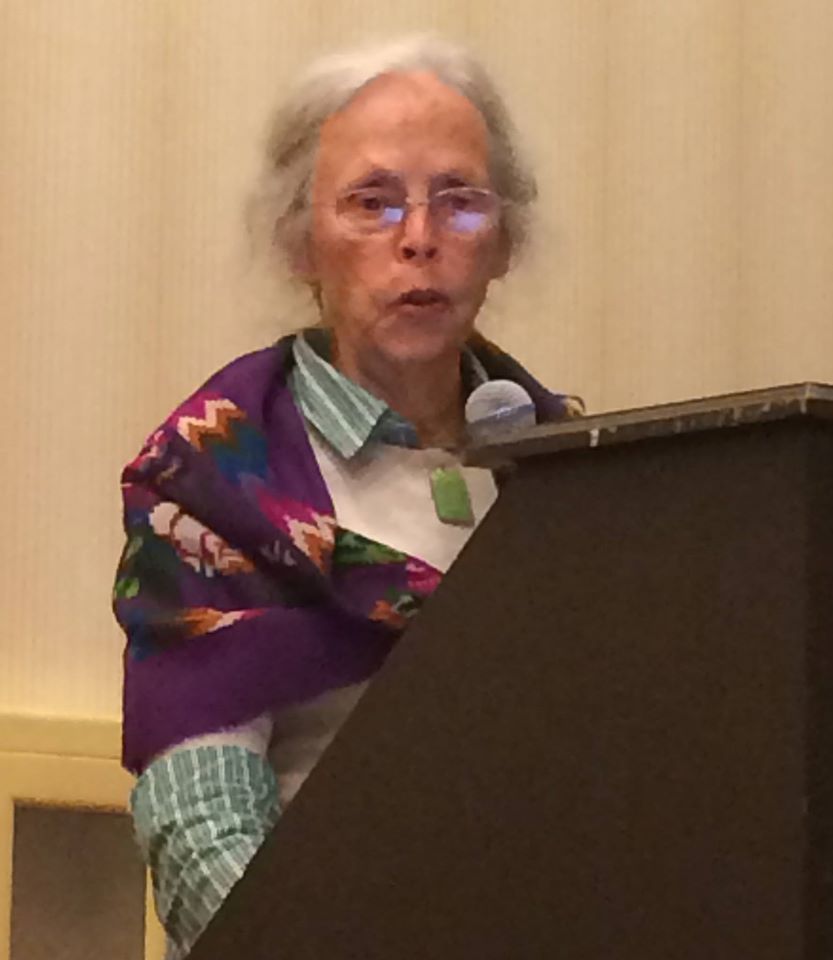 “Do you see anything wrong with napping?” Ina May Gaskin asked. “I don’t.” The audience laughed.

Ina May Gaskin also mentioned that most women need to eat and drink during labor and recalled several labors at The Farm where she fed women bits of soup and other nourishing food. Without that soup, she speculated, those women might have ended up with C-sections.

Yet protocol in most American hospitals is to deprive food and even water to women during labor.

The women who gave birth on The Farm were in good physical shape, Ina May Gaskin said. No one had a car. And no one had a bicycle. So they walked everywhere. Gaskin believes that one of the reasons they were able to have such outstanding birth statistics (no maternal deaths and a C-section rate of less than 2 percent) was because women were in good physical shape. Having a baby is a very physical activity. The women who live on The Farm now are not in as good physical shape and their births are not as easy. So encouraging pregnant women to move as much as they can throughout the day, and to exercise as well is very important.

Birth is a paradox, Ina May Gaskin concluded.

What else helps with birth?

I attended a workshop with Debra Pascali-Bonaro, the director of the movie Orgasmic Birth. A doula as well as a childbirth educator and international speaker, Pascali-Bonaro has many tools in her birthing toolbox.

She encourages birth affirmations, kissing, hugging, massaging, and lots of sensuality during labor. Privacy, intimacy, and the certainty of safety and protection, Pascali-Bonaro and other speakers pointed out, are what will help a woman have the best labor experience she can.

Pascali-Bonaro shared a video of an orgasmic birth that is not yet available to the public. A Dutch couple who had recently moved to Bali. At one point when labor started getting really intense the mom decided she needed an ambulance to go to the hospital. Her midwife was on her way but had not yet arrived. The midwife, Robin Lim, instructed the laboring mom’s husband to get into the Jacuzzi with her and start kissing her.

The kissing really worked and the mom started enjoying and relaxing through contractions. 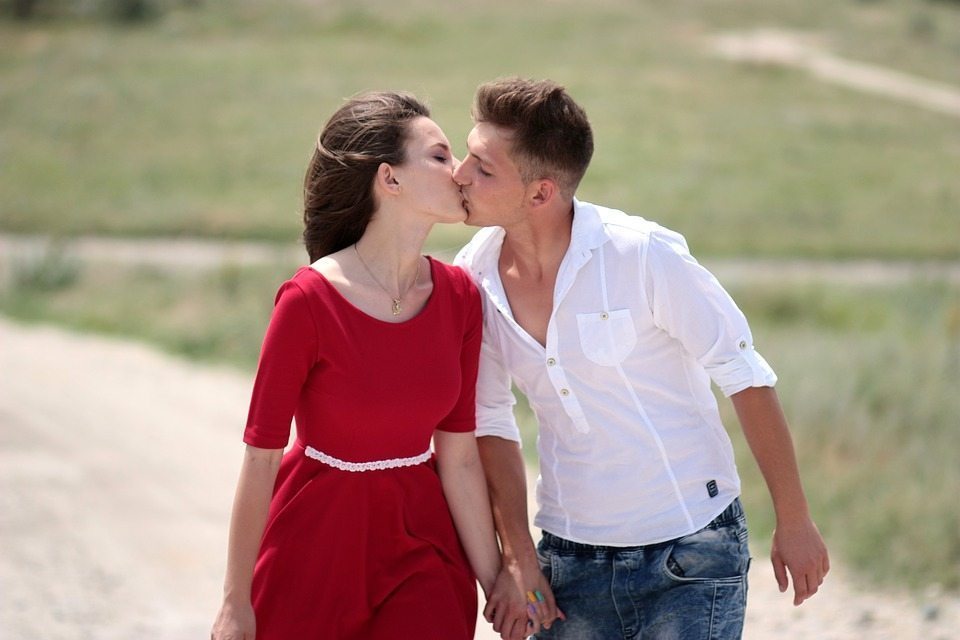 It takes love to get the baby in there in the first place, and love helps the baby come out, according to several speakers at the BirthWorks International conference. Photo via Pixabay.

Her baby was born effortlessly into her husband’s loving arms, while he cried “give it back to me, give it back to me.” They were both laughing and crying, in love with each other and their new baby. The midwife had no idea why the dad kept telling his wife to give it back to him. Later the happy couple, cradling their beautiful new baby, explained: They had made love in that same position nine months before (from behind). He had given his sperm to her and she had given him back a baby!

Imagine how much more peaceful and beautiful our world would be if every baby could be born into that much love and joy.

« Where You’ll Find Me: Eugene and Philadelphia
This Mom’s Pet Bird Was Dying, Until She Did This »