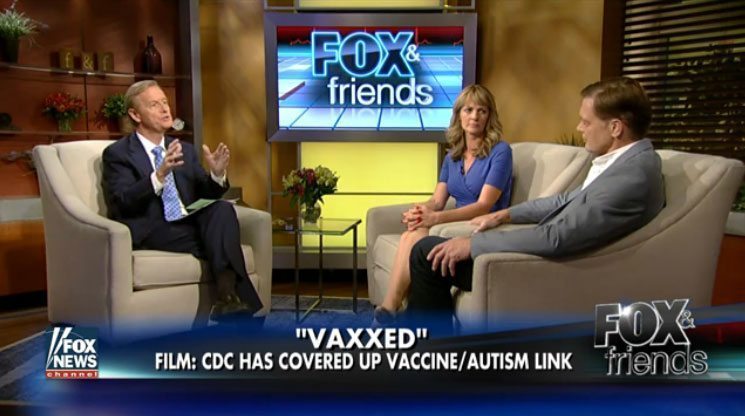 Editor’s note: All week Oregon has been discussing Vaxxed. This is the 3rd in a 3-part series about the documentary film made by Emmy-award winning television journalist Del Bigtree and British Gastroenterologist Andrew Wakefield (read their bios). Vaxxed is a film about a senior scientist, William Thompson, Ph.D., who has thousands of pages of documents in his possession that allegedly show that the CDC committed scientific fraud in a study about the relationship of the timing of the MMR vaccine and autism.

You can read part 1, a journalist’s reaction to the film and defense of free speech, here; and part 2, a summary of the film’s main points, here.

By Liz Schmidt, Special to JenniferMargulis.net

Oregon discusses Vaxxed. Approximately 90 Rogue Valley residents packed the Gresham Room at the Ashland Public Library on Wednesday evening, June 1, 2016, for a three-hour community panel and discussion of the issues and questions presented in the film Vaxxed: From Cover-up to Catastrophe, the documentary about vaccine-related government corruption that has been playing for the past two weeks at the Varsity Theatre.

The evening started with a description by each of the six panel members of what they know and believe about vaccines.

Cynthia Cournoyer, a Grants Pass mother and author of the book, What about Immunizations? Exposing the Vaccine Philosophy, took us on a brief journey through her 30+ year investigation of vaccines, starting when she and her husband were young parents.

Their decision to not vaccinate their children, based on Cynthia’s extensive research, was accepted by others as a personal parenting decision; unlike today when the mainstream media dishonestly portrays non-vaccinated children as pariahs spreading disease. The Cournoyers’ resolve has been strengthened over the years as their children have remained extraordinarily healthy. Throughout the evening, many parents shared observations of how their unvaccinated kids are extremely healthy compared to their vaccinated friends.

Katelyn Carey, R.N., an emergency room nurse at Ashland Community Hospital, argued that vaccines are an effective means of preventing disease. She expressed concerns about Andrew Wakefield’s credibility as a doctor and about the dangers of infectious disease, especially whooping cough. As an ER nurse, she treats children who are dangerously ill. Carey also expressed some ambivalence about the number recommended today by the CDC and limitations of conventional Western medicine, and appreciation for the many natural treatment modalities available in our area.

Kacie Flegal, D.C. presented a detailed explanation of how our immune system is designed to develop from birth into a robust health-promoting function within the first few years of life. She discussed cellular vs. humoral immunity, how vaccines shortcut important parts of the immune system, and how babies’ bodies cannot appropriately process and excrete the ingredients contained in vaccines. During the evening many audience members directed questions to Kacie and it was obvious that she has extensive knowledge of this development process.

Lisa Nichols, a community member and music teacher, talked about how she formed an appreciation for homeopathy through personal experience with health challenges over the years, and briefly touched on homeoprophylaxis as an effective alternative to pharmaceutical vaccines. Later in the evening Lisa talked about her 2015 meeting with Andrew Wakefield, describing him as one of the most sincere and caring doctors she has ever encountered and offered a passionate defense of his character and intentions.

Gerry Lehrberger, M.D., an emergency room physician at Ashland Community Hospital, gave us a brief history of how our medical system evolved into what we have today. Particularly interesting is how so many health disciplines were pushed into the shadows during the 20th century as pharmaceutical interests exerted tremendous power over the purveyors of effective natural alternatives.

Gregg Marchese, a local activist, presented further insights into the money and power structures that influence our health care system. He stated “No vaccines have ever been effective at preventing disease and all cause some degree of harm. The global vaccine programs are perhaps the most successful part of a eugenics and population control plan enacted by a cabal of oligarch banksters.”

Throughout the evening, the panel moderator, Matt Vogel, SOU staff member and instructor, added interesting insights from his research and experience. “There can be a subtle silencing of students who bring up critical questions about vaccines in many college classes and programs across America,” Vogel said. “I know students who have been shamed and labeled for expressing differing views.”

When the floor was opened to questions and comments many hands went up, and it quickly became obvious that the audience, as well as the panelists, were informed and passionate about vaccine-related medical issues. A poll revealed that almost all attendees had seen the film #VAXXED during its run at the Varsity, and the pursuing discussion was energetic and informative.

Several audience members of the older generation described how they and their childhood friends spent a few days home from school with chickenpox, measles, mumps and/or rubella, but were not afflicted with the chronic and serious health challenges that are so common among today’s children…asthma, eczema, food allergies, arthritis, seizures, bowel disorders, ADD, autism, diabetes, cancer, and so on.

One brave, highly-functioning student with autism from SOU gave a thoughtful, impassioned plea to be accepted as simply different, rather than defective. It was apparent from the audience’s response to her story that there was much compassion, understanding and appreciation for how those categorized as ASD (autism spectrum disorder) are unique and valuable persons, not just numbers on a graph.

An important issue that was raised several times throughout the evening, and the primary reason I started the campaign to bring the film VAXXED–described by many as a “game-changer”–to our valley, is the increasing threat of vaccine mandates.

Though my husband and I did a great deal of research on vaccines over ten years ago before arriving at the decision to stop vaccinating our daughter, we did not give it a lot more thought until early 2015, when SB442 was introduced in the Oregon Senate. This bill was written to eliminate all children’s vaccine exemptions except narrowly defined medical waivers, and this threat pushed us and many other parents into high gear. Fortunately there was not enough support to bring it to a vote last year, but the word among Oregon’s vaccine-cautious community is that Elizabeth Steiner Hayward, a physician-senator from Beaverton affiliated with powerful pharmaceutical interests, will make another attempt in the next legislative session to strip away our parental right to decide whether to allow drugs with serious side effects to be injected into our children in order to attend school. This push is part of a nationwide effort, orchestrated from the highest levels of the pharmaceutical industry, to mislead, coerce, and/or bribe our elected officials to tighten vaccine exemptions and to squash dissenting opinions by medical professionals, parents, students and citizens concerned about adverse effects.

It is my hope and prayer that the film Vaxxed will create a chink in the dam that has been holding back the truth of the ongoing fraud and corruption at the CDC which has allowed our children to be used as guinea pigs for pharmaceutical interests under the guise of public health. I could go on for hours explaining this statement, but I’ll close by encouraging all who were not able to see Vaxxed while it was in town to watch for it in other cities and/or see it when it comes out on video. A couple other vaccine-related films already available on DVD and online are “Bought” and “Trace Amounts.” Other titles will be coming out soon to further this important conversation.

The deceit has gone on far too long…our children need us to act on their behalf, before it’s too late.

“Never doubt that a small group of thoughtful, committed people can change the world. Indeed, it is the only thing that ever has.” ~Margaret Mead