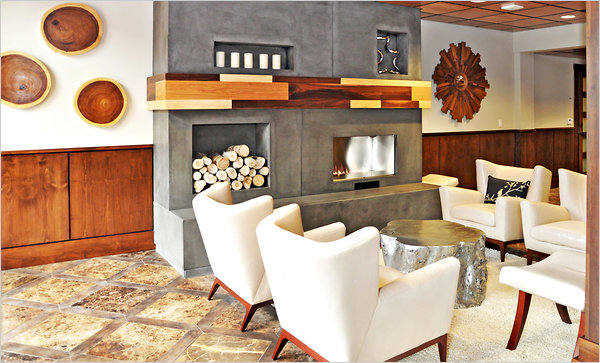 THE Oxford Hotel is just three blocks from Drake Park in Bend, Ore., a popular gathering spot where couples and families picnic and teenagers lazily hand-paddle down the Deschutes River on air mattresses. But it’s mattresses of another sort that are notable at the hotel. They are all-natural — no polyester or off-gassing here — and are purchased from a supplier less than three miles away.

The locally owned, 59-room Oxford Hotel (10 NW Minnesota Avenue; 877-440-8436; oxfordhotelbend.com; doubles from $239), which opened in January, also cleans its rooms with a nontoxic solution made from electrolyzed salt and water. The hotel is entirely powered by Columbia River Gorge wind farms and hydro dams through renewable energy credits provided by Pacific Power’s Blue Sky program. A rooftop garden is in the works, and is expected to yield herbs for the hotel’s kitchen by next summer.

It is not out of place among boutique hotels in the area. The Oxford is one of a growing number of establishments in the Pacific Northwest with a mission: to bring the combination of luxury and environmentally conscious lodging to a new level.

“What we’re doing is definitely pushing the envelope,” said Ben Perle, the hotel’s general manager. “I want to be a trendsetter and have more people be eco-conscious. But I’m careful how I phrase it. There’s so much greenwashing out there,” he said, using a term that indicates deceptive claims of environmental responsibility. “I never want to be labeled as that.”

The décor at the Oxford is rustic — antler lamps and metal side tables shaped like tree stumps — but the atmosphere at the Heathman Hotel (1001 Southwest Broadway; 800-551-0011; heathmanportland.com; doubles from $249) in Portland, Ore., is decidedly upscale. Fine art, including original Warhols, adorn the walls of the hotel, which originally opened in 1927. The doorman wears beefeater red stockings and a white ruffle collar, and afternoon tea is offered. What guests may not know is that the tea court’s teal rococo-pattern couches are made from rubber tree sap and soy-based foam — installed during a remodeling in 2010.

“In an earthquake we could eat the furniture,” joked Chris Erickson, the general manager, who also spearheaded a 99 percent landfill-free bathroom remodeling in June 2009, using sustainably grown teak, installing recycled tile over existing flooring and donating old fixtures to the ReBuilding Center, a Portland business that reclaims used building materials.

“It’s not just that we copy paper on both sides,” Mr. Erickson said. “We do much more than that.”

Next year, the Gaia Shasta Hotel in Anderson, Calif. (4125 Riverside Place; 877-778-3977; gaiashasta.com; doubles from $109), will pull out the drip irrigation on its nine-and-a-half-acre property, which has been landscaped with drought-resistant vegetation like incense cedar and western redbud. The 120-room hotel south of Redding opened in December 2008 and features solar collection tubes that bring natural sunlight into the building, a laundry system that uses an environmentally sound ozone sterilization machine for the water, and a filtration system that recaptures 80 percent of wash water for reuse.

“It’s in the nature of the people who live in the Pacific Northwest to be environmentally conscious,” said Yuan-Sing Chang, project manager at the Gaia Shasta. “We have great weather, we’re outdoors, we have water and mountains and a direct connection to the environment.”