From cycling in Europe on two panniers a day and other experiences, Anne McAlpin brings travel tricks and packing techniques such as threading a necklace through a straw. 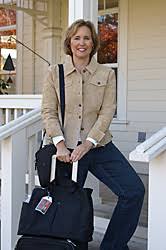 Packing techniques from a pro. Anne McAlpin is a packing expert and author of Pack It Up: Travel Smart Pack Light. Photo by Jennifer Margulis.

Ashland, Ore. There are titters, actual titters, from the audience when Anne McAlpin models one of her favorite packing techniques: Thread a necklace through a plastic drinking straw and pack it in a toothbrush holder to avoid kinks.

I see several white-haired ladies in the packed downtown Ashland travel store fidget as if they want to go right home and try the idea. I know I do. This is the Martha Stewart of travel.  Anne McAlpin can make you feel like a real lummox for arriving at your final destination with fold-marks in your clothes. For that last-minute shoe panic on the way out the door. For not having the sense to pack a toothbrush and underwear in your carry-on in spite of all the travel horror stories you’ve read about.

And yet, her solutions to these problems somehow (a necklace-stuffed-straw, for goodness’ sake!) inspire you to think you can effortlessly hit the road perfectly unmussed—just like Martha Stewart’s soothing ideas make slobs imagine they can reform.

“There are people here who have seen her five times,” says Steven Frazier-Rice, Ashland’s Travel Essentials store manager and host of her talk. “She has so much travel experience, she knows what she’s talking about.”

“I still get excited every time I get on a plane,” Ms. McAlpin says. “That travel bug. It’s just an inherent thing you’ve got in you. I’ll keep doing this as long as I can keep moving.

Some of her travel advice seems to verge on the obvious. Like the admonishment to familiarize yourself with the Transportation Security Administration website: www.tsa.gov. TSA is updated regularly, because regulations change so fast (3-1-1 is the new rule for liquids in carry-ons: no more liquid than can fit in 3-ounce containers, and as many containers as will fit in 1 quart-size ziplock bag, 1 bag per traveler).

And some of her travel advice and packing techniques seem to verge on the impossible. The brilliant tip to pack women’s shoes inside men’s shoes sounds great! But how do you do it when your companion hasn’t decided what to bring yet?

Still, there’s comfort in a list, a command, an innovation to make you feel “all set to go,” whether you’re headed to a tame but costly cruise or to an off-the-grid corner of the world.

One of the titterers at McAlpin’s travel-store talk is 70-something Julia Burns. Burns is on her way to Japan with a peace choir and came to find out how to make the trip go smoothly.

“They have a lot of new inventions to make travel easier,” she whispers as we watch McAlpin. “If you have the money to buy them.”

In a time of heightened airport security and changing regulations, McAlpin makes it her business to be on top of government requirements. She is also a guru of the latest gadgets and gear that make meeting those requirements easier.

When she couldn’t find the travel gear she needed for her own voyages, she started a line of products that you never knew you needed. She developed a change purse to hold three kinds of currency; a packing board to keep clothes unwrinkled; a travel towel that doubles as a blanket for the plane.

Her most important advice for holiday season travel: check that TSA website. And don’t wrap the gifts you bring in your checked or carry-on luggage, because airport security might unwrap them.

If you’re not a last-minute shopper (like me), McAlpin suggests sending gifts ahead by snail mail to avoid airport hassles.

If you do travel with gifts, it’s better to keep them with you in your carry-on.

That way if your bag gets lost, you’ll still have them. And on the subject of carry-ons, McAlpin tells the audience it’s essential to have one on wheels. “We only have one back and one neck,” she says. “We need to protect them.”

Because passengers are allowed one carry-on bag and one personal item, McAlpin suggests making the most of the “personal item” by carrying a large tote (preferably one that can slip on top of the rolling carry-on bag) and stowing an even smaller bag inside the tote.

It all began on a bicycling tour of Europe when McAlpin was 16 and had to carry what she needed in panniers.

The challenge of figuring out what to bring, getting it to fit, and how to wash it all hooked her for life, she recalls in an interview in her high-ceilinged Jacksonville, Ore., home. An antique suitcase collection decorates the tops of her kitchen cabinets.

After college she volunteered to baby-sit on a cruise ship when no one would pay her to work on one.

“That was when ‘Love Boat’ was popular,” McAlpin says. “I wanted [cruise director] Julie McCoy’s job.” It was on board a cruise that McAlpin discovered how hungry travelers were to learn to pack.

When a cruise director told the staff to come up with a new activity, McAlpin teasingly suggested demonstrating how to pack bags.

“It was a pure joke,” she says. But the cruise director thought it was a good idea.

At 8 a.m. she dragged her suitcase into the lounge, and 100 people were waiting—and a career was born.

Eight years and 67 countries later, McAlpin’s interactive packing sessions were so successful she was doing them once a week.

Then, sailing through the Panama Canal, a grateful elderly lady became a muse of sorts.

“You should write a book! If I had known all these things I would’ve saved space and saved money,” she told McAlpin. Inspired, McAlpin started compiling packing techniques from her own travels and the experience of passengers.

The book didn’t get written.

But the next year, on a cruise to Asia, the muse came up to her again.

“I can just still see her,” McAlpin recalls. “She said to me: ‘You’re still doing the same thing? Didn’t I tell you to write a book?’ ”

Write a book she did: “Pack It Up: The Essential Guide to Organized Travel.” Some people, she says, “thought it was a dumb idea.” So she published it herself and sent a copy to Oprah Winfrey, who must have recognized the average traveler’s angst and invited McAlpin on her TV show.

In her book and talks, which McAlpin gives at AAA offices and department stores, she unpacks all her travel knowledge – and, with only two weeks home a year, it’s prodigious.

One of McAlpin’s most innovative packing techniques is what she calls a wrinkle-free packing method. Put all heavy, awkwardly shaped, or loose items, including shoes and a small vial of laundry detergent at the bottom of the bag. Over that, place a flat packing surface—you can make one yourself out of cardboard or, yes, for $17.99 to $19.99 you can buy a lightweight one from McAlpin. Then interlay slacks in your suitcase. But don’t fold them over. Leave the legs extending over the sides. Then roll shirts and knit items into the middle of the interlaid pants. After a row of shirts has been added, fold over the pants.

This technique, she says, utilizes every bit of space. It keeps clothing wrinkle free, and makes accessing clothes easier. The board lifts out, making it simple to get underneath without disturbing the rest of the items.

Travelers’ most common mistake, she says, is bringing too much stuff.

McAlpin recommends, for example, packing no more than three pairs of shoes on any trip.

Don’t roll your eyes. She says she once had an audience member on a cruise admit she’d brought 47 pairs of shoes—and rented the cabin next door as a closet.

She recommends putting valuables (like cameras and laptop computers), medications, and an extra pair of socks and underwear in carry-on luggage—everything you need for the first 24 hours of your trip.

Socks with the zipper pocket to hide money look uncomfortable. But a McAlpin-designed solution suits me: A black silk bag just big enough to hold a passport, credit cards, and currency. It’s small enough not to make you look pregnant when you wear it around your neck under clothes. And it’s cute enough to sling over your shoulder as an “evening bag” once you arrive. Still, I don’t think I’m going to be needing an evening bag on my next trip.

But, on second thought, the purse would work for my travel-loving sister-in-law. Maybe this year my holiday gifts won’t be last minute after all.

A version of this article originally appeared in The Christian Science Monitor / December 18, 2007.