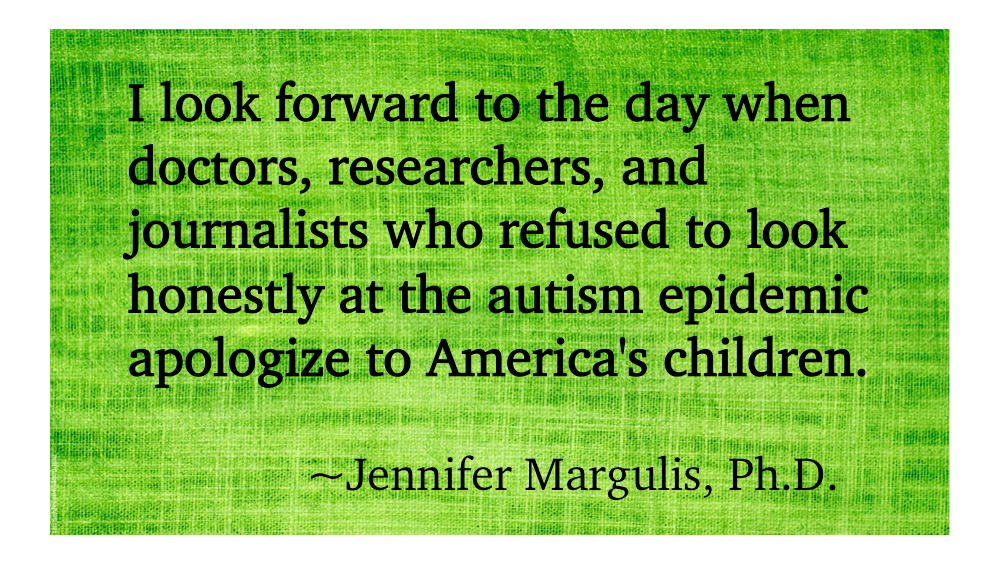 But I was baffled and sorry to hear Steve Silberman, an award-winning science journalist, make several incorrect assertions about the current prevalence of autism in America.

Steve Silberman may be the darling of the mainstream media right now, but some of what Steve Silberman said to Terry Gross was sadly, and dangerously, wrong.

Autism is an umbrella term that we apply to children and adults who have very different illnesses.

I agree with Steve Silberman that when autism is neurodiversity it can and should be celebrated.

Those with autism or ADHD or ADD or ______ [add your label here] are unique and wonderful and blessed and should be honored for their gifts. Some people who are considered autistic, like Temple Grandin, Ph.D., lead healthy, happy, and productive lives. They are the ones organizing the retreat like the one that Silberman attended. They are the ones capable of reading this blog.

But the problem is that Steve Silberman is conflating children and adults who have some neurodiversity with children and young adults who are suffering from severe autism and related health issues like gastrointestinal problems and severe pain.

While Silberman may be correct that the numbers of people who are neurologically different have not increased exponentially, he is incorrect in his assertion that there has only been a “tiny” increase in severe autism.

As Dr. Thomas wrote to NPR this morning:

I am a Dartmouth-trained M.D. and a member of the American Academy of Pediatrics in private practice in Portland, Oregon. I have over 11,000 children in my practice and I can tell you definitively that autism rates among America’s children, particularly boys, have risen exponentially since I began practicing in the 1980s.

This is not a ‘tiny’ increase and it is not a question of ‘neurodiversity.’ I am talking about children with severe autism who cannot speak, are still in diapers at age 9, and do not grow up to be adults who are able to organize or attend retreats.

The California Department of Developmental Services, which keeps the country’s most reliable statistics, reports a 21 percent increase in severe autism in a 5-year period (source) and a peer-reviewed article by Stanford-trained researcher Dr. Cynthia Nevison, Ph.D., confirms that, though changes in diagnostic criteria may account for 20-25% of the increase in autism, between 75-80% of the reported increases are due to a real rise in the disease: ‘Diagnosed autism prevalence has risen dramatically in the U.S over the last several decades and continued to trend upward as of birth year 2005. The increase is mainly real and has occurred mostly since the late 1980s (source).”

Steve Silberman is correct that we have wasted millions of dollars looking for a genetic cause of autism.

But he is incorrect that we should stop looking for a cause and stop putting money into finding cures.

This money has been wasted because severe autism accompanied by other health problems is not caused by genes.

Something in the environment—or perhaps two or three things—is causing brain damage to our children that we call autism.

Sometimes, not always, that brain damage we call autism is reversible.

What are the biologically plausible causes of autism?

1) Prenatal exposure to ultrasound, which both disrupts cell membranes and encourages brain cells to divide and migrate when they should not.

2) Acetaminophen, a coal-derived medication that is known to interfere with the body’s production of glutathione, a chemical necessary to rid the body of neurotoxins like aluminum and mercury. Read more about the role of acetaminophen in autism here and here. Read one family’s story about how vaccines and Tylenol caused their son’s autism here.

3) A combination of toxic environmental exposures, perhaps including glyphosate and the ingredients in certain vaccines, that creates an inflammatory response in the body, leading to sometimes irreparable brain disruption and autoimmune dysfunction.

I am glad that Steve Silberman’s book, NeuroTribes, is drawing attention to the autism epidemic and the needs of people with autism.

And I look forward to the day when the doctors, researchers, and journalists who refuse to look honestly at the autism epidemic apologize to America’s children.

For Further Reading:
* A balanced review of Steve Silberman’s book
* Face It, There *IS* an Autism Epidemic by Lisa Wiederlight, director of SafeMinds
* A comparison of temporal trends in United States autism prevalence to trends in suspected environmental factors (PDF text of full article)